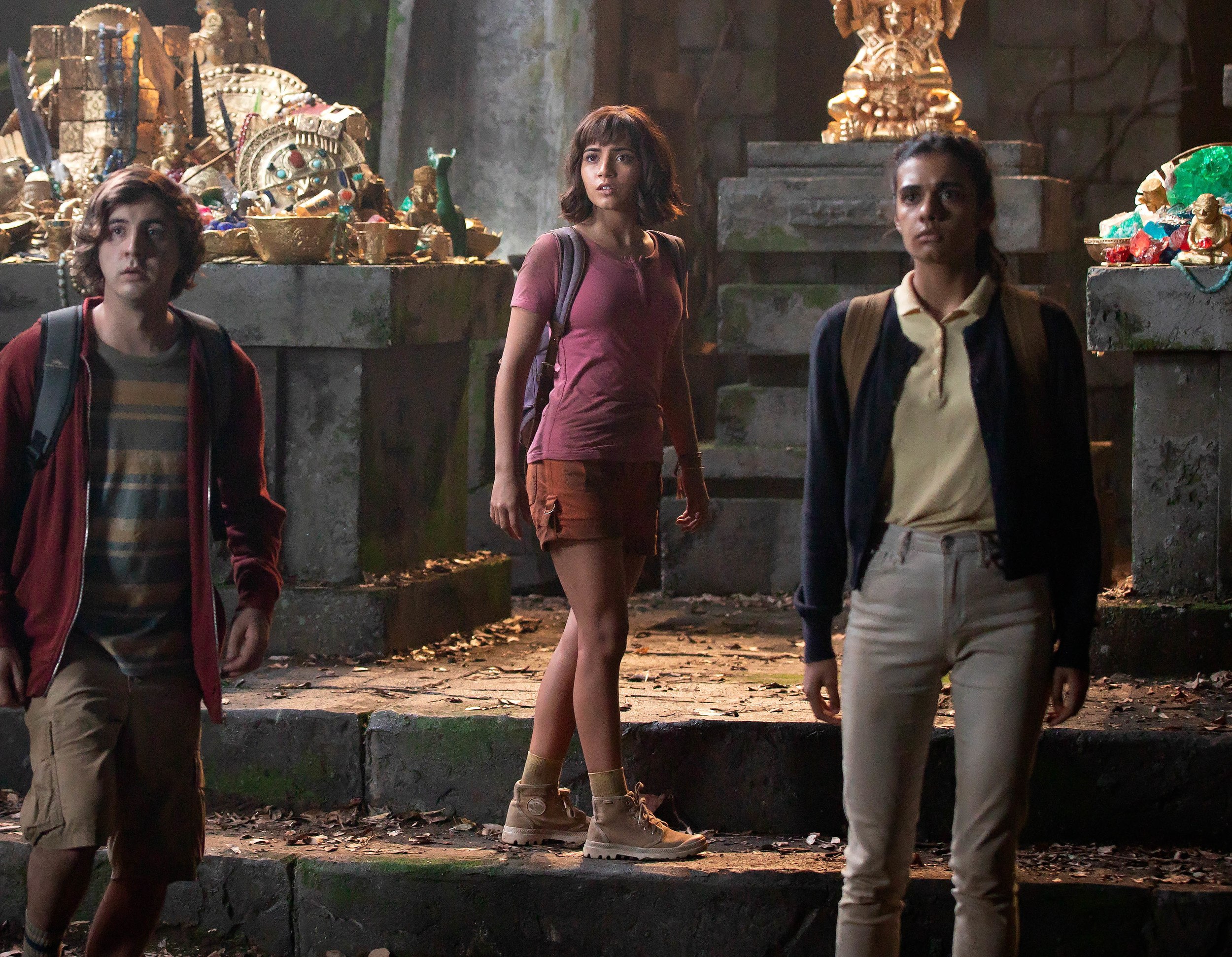 In a cinema market where name recognition is the best indicator of success it was only a matter of time before Dora the Explorer appeared on the big screen. Since its Nickelodeon debut in 2000, Dora the Explorer has became a household name among any house with a child and a television, especially with parents with any special interest in exposing their children to diversity and other cultures. Nearly twenty years later, Paramount and Nickelodeon give the Spanish-speaking girl with the bob haircut a bigger audience in Dora and the Lost City of Gold, and you can be glad they did.

In the new Dora, our girl (played by Isabela Moner) has aged into a young teenager. She maintains the childlike innocence and charm she had at the age we once knew her. Living mostly alone in the Amazon with only her parents and her quirky pet monkey, Boots, Dora’s social skills fit better in the jungle than a high school. Her best childhood friend is her cousin Diego. They’re forced apart when Dora’s parents (played by Eva Longoria and Michael Peña) take her off in search of a lost city of gold, and you can imagine the challenge of what’s to come: Diego grows up in a “regular” school system and becomes a normal teenager while Dora remains the same, untarnished by high school popularity, politics, or peer pressure.

When Dora and Diego are reunited as teens, the result is a fish-out-of-water comedy that places an awkward-yet-confident Dora in a Los Angeles high school with her frequently embarrassed cousin Diego, who wants to sink into the ground each time Dora opens her mouth, or worse, dances like the animals of the jungle. The film catches its stride when Dora and a few classmates — an awkward nerd named Randy, a nerdy mean girl named Sammy, and Dora’s cousin Diego — find themselves kidnapped by a group of mercenaries trying to track down Dora’s parents to find the city of gold themselves. The fish-out-of-water scenario is flipped when Dora returns to her comfortable landscape of the jungle and her begrudging acquaintances are the ones out of place and completely out of their element. Of course, hilarity ensues that include a few clever nods to adults in the audience — phrases like Terminator‘s “come with me if you want to live” and The Wire‘s “come at the queen, you best not miss” — along with homages to the original Dora the Explorer for longtime fans. There’s even a third-wall break a lá the original series (can you say “delicioso?”), some throwback animation, and Swiper the Fox, complete with bandana, voiced by Benecio del Toro.

Most refreshing of the Dora film is its decision towards maintaining the character’s innocence. Dora and the Lost City of Gold is about friendship, curiosity, self-confidence, and ultimately Dora’s coming-of-age, though not through her own moral growth but in others around her learning from the light she shines. Everyone around Dora has something to learn, and the more time they spend around her the more they’re forced to confront the challenges they resist. With her friends those challenges come in the form of high school popularity and confidence; with her parents it looks like accepting that their child is growing up and is smart and capable and that it’s time to let go. It would have been an easy pitfall to sexualize Dora or her friends in their hormonal teenage years, yet the film swings over it with a genuine purity that makes for the best child-friendly adventure movie I’ve seen in a long time.

The overall feel of Dora and the Lost City of Gold is that of a child-friendly Tomb Raider, complete with quicksand, ancient ruins, and no shortage of jungle puzzles. Overall, it’s pure fun, and a sincere, wholesome family movie. Dora and the Lost City of Gold is full of heart, comedy, and adventure, and unless you’re dead inside it’ll leave you smiling — and singing — when you leave the theater. After all, as Dora would tell you, it’s always a good time for a song.