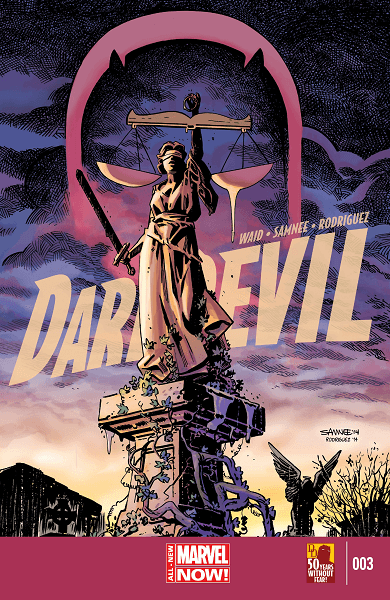 Matt Murdock is the smoothest man alive. I am loving Mark Waid’s take on DareDevil. Its just as good as Brian Michael Bendis & Alex Maleev’s run but lighter on the grit and noir. This is fine because its a colorful and enjoyable read. Reading this issue made me want to catch up on the last run before the renumbering.

Now if Spider-Man is the nerdy jokester that gets shitted on by life then buddy cop wise, Matt is the cooler older brother that has his shit together, along with charm… (that life keeps shitting on). We get full on classic Matt as he sets up in San Francisco. He is still getting use to the city (which takes him out of his element. I love his complaints about the set up and readjusting he has to do to accommodate when crime fighting). Also there is a reveal I wont spoil here but I will say… things clear up for weather wise for a fan favorite.

However Matt learns this isn’t the old silver age soft Owl. As he plays his trump card which puts Matt in a

Get this book yall