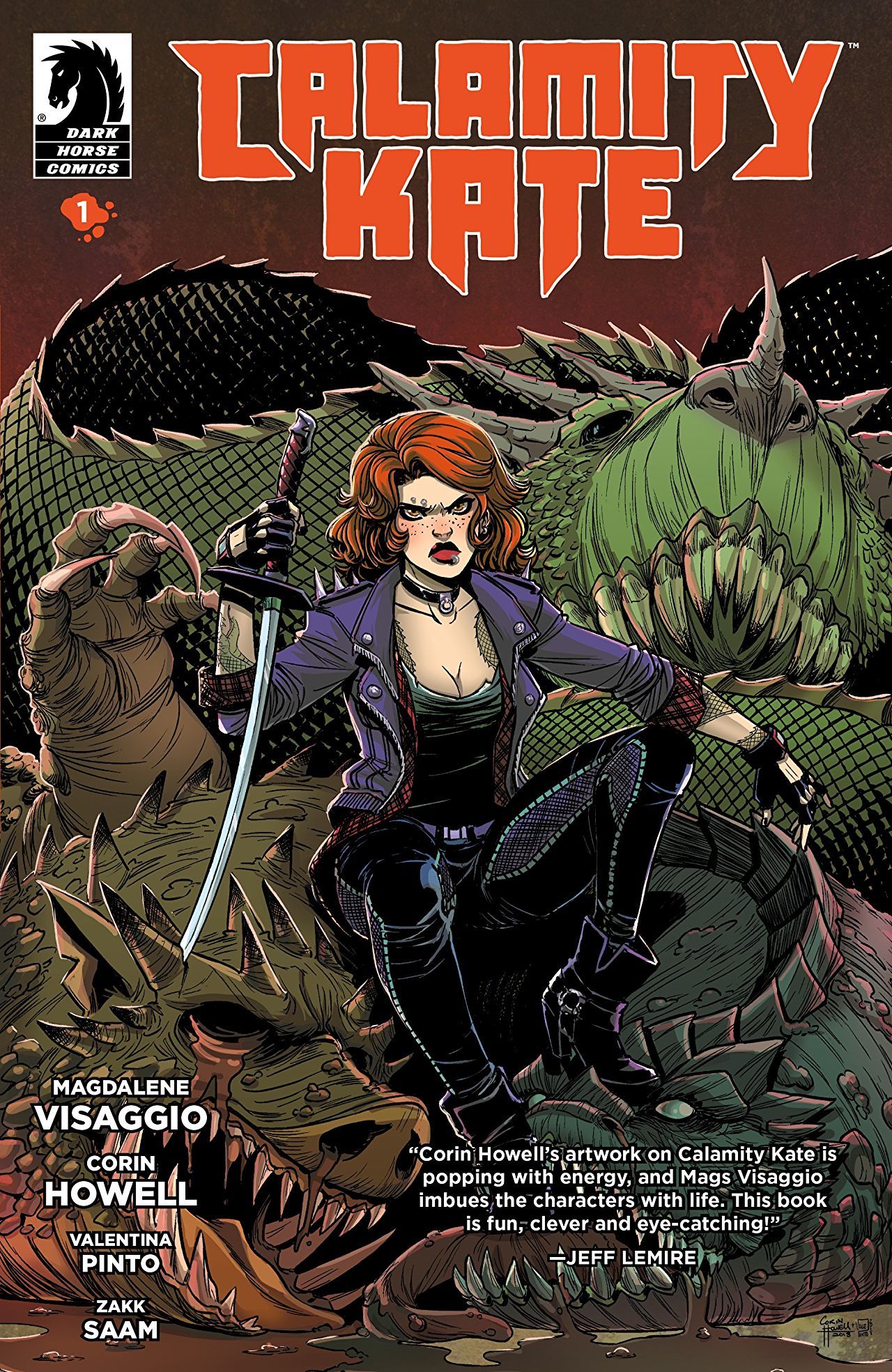 Black Nerd Problems: How would you describe Calamity Kate to a fan of comics that’s never read anything other than Marvel or DC before? Like someone who hasn’t ventured outside of mainstream superhero comics.

Magdalene Visaggio: It’s about a woman—who after a very nasty divorce—decides to burn her life to the ground and reinvent herself so she gets a bunch of tattoos, changes her style, hops into a 1979 Lincoln Continental with a Samurai sword driving across the country and cutting off the heads of goblins. She becomes the monster hunter she always wanted to be to sort of deal with the trauma of her divorce. 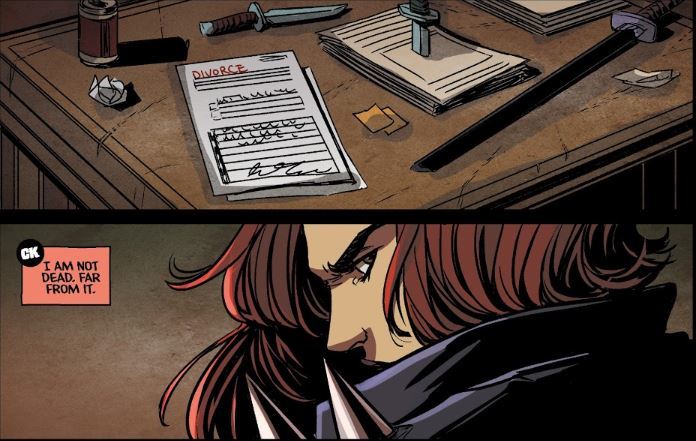 BNP: It kind of reminded me of a superhero book in the sense where it seems like monster hunters kind of take the place of what superheroes would be in this world.

MV: Yeah, to a degree. I was treating them more as celebrities. But with superheroes, there’s definitely a lot of crossover there too. And it’s definitely like tonally—it feels to me a lot like a Marvel book. It’s got that kind of mixture of humor and pathos that’s so characteristic of that company’s tradition. But yeah, I never really thought about it in those terms. You’re not the first person to bring that up, and I never thought of that. To me, the analogy was that they’re stars.

BNP: What creative sources outside of comics would you say were most influential for you while developing this book?

MV: I’m not sure. I’m really not sure. I don’t always know what’s influencing me. I wasn’t consciously drawing from anything. But I love road stories. I love over the top bombastic action. There’s probably a lot of stuff that’s feeding into it. One unconscious influence that my editor noticed was John Cheever’s short story The Swimmer. There’s a good deal of some of the fantastical elements of that story. How time flows. And I’ve always loved that story.

MV: Kate’s based a lot on my own worst impulses. In the same way that Kim Q is in Kim & Kim, they’re just different shitty parts of me. I got divorced last year and that was a really, really rough experience.  And I wanted nothing more than to burn my life to the ground. I looked at my bank account, saw I had $7,000, and was like, I could go to LA. And I didn’t do that. But all of the different forms of what I’ve been calling creative self-destruction— some of which I did and some I didn’t do. Stuff that I was contemplating at the time. Like getting a bunch of tattoos. Getting piercings. Changing how I dress. Changing my hair. Moving across the country. Just completely rebooting my whole life. I just did that through her.

BNP: And for Corin, in terms of developing her look, was that all based on descriptions from Mags, or did you have any creative input?

CH: Mags had an overall description of that punk kind of rebellious look, But I had the idea of like the Peter Parker scenario. Peter Parker is like the nerd, he’s kind of plain. He’s not really loved. He’s just kind of there. But as soon as he’s bitten by a spider, he gets abs and now he’s a superhero. So it’s kind of like the idea of taking a character that was kind of like plain looking before the divorce, like straight hair, wore plain clothes, very plain colors, not really the most interesting person in the room. But as soon as this horrible thing happens in her life, she does a 180 and she just lets her hair go wavy and lets her hair down and gets the leather jacket and the tattoos, the lace, the piercings. And just kind of like allowing that rebellious nature to overtake her personality.

MV: And those are all impulses that she had been like suppressing as she was trying to sort of be the person that her partner wanted her to be. That’s something that’s gonna play out through flashbacks over the course of the book. Sort of the way their relationship was toxic and the way they hurt each other. So, everything she’s doing is a reaction to that. The no longer feeling hemmed in, but also the impulse to self-discover. She’s exploring parts of herself she never let herself get into.

BNP: So how does the relationship work between the two of you? Like from script to page. Are you super detailed in the scripts, or do you play it fast and loose?

MV: Do you think I’m too detailed in my scripts?

MV: I try to be very Spartan in my scripting. She’s got such an incredible command of the page. And especially her action sequences. In more recent scripts, I’m just like here’s an action page with roughly some of the beats. Here’s where it needs to be by the end. But I trust you to do the choreography for that. Because otherwise, I feel like I get really repetitive.

MV: The way I see it is like the artist is the co-storyteller, and, I feel like unless I need something really specific for this story to advance the way I want it to with the themes, in which case, I’ll communicate. But otherwise, it’s just—I try to trust whoever I’m working with to handle that. To take command of the visual art of it. That’s their expertise. My expertise is—as much as anyone could claim it—like pacing and plot development and dialogue. I try to think of things that would be sort of interesting to draw. And things that would be interesting to see.

CH: I sometimes have a problem with being repetitive. So, the way I’ll counteract that is like making it in silhouette form. So, it’s like you’re not seeing every detail but you can tell what’s going on so that way it’s kind of alluding to letting the reader figure out what other borders are they seeing on the page.

MV: One of the things I really wanted to accomplish in the action that Corin nailed is that I wanted the action to feel very free-flowing. Like I kind of realized that’s what I wanted when I started the scripting process in the early pages. Like she slams on the breaks, the car spins out, she climbs on top, and leaps right at the reader. I was like well that’s the vibe of every fight in this book. It’s gotta be like that. It’s gotta have that movement. So, I can’t remember the name—I don’t do a ton of anime. That’s never really been my passion. But there’s this one director who I know does a lot of things with people running and leaping from rooftop to rooftop as they fight. 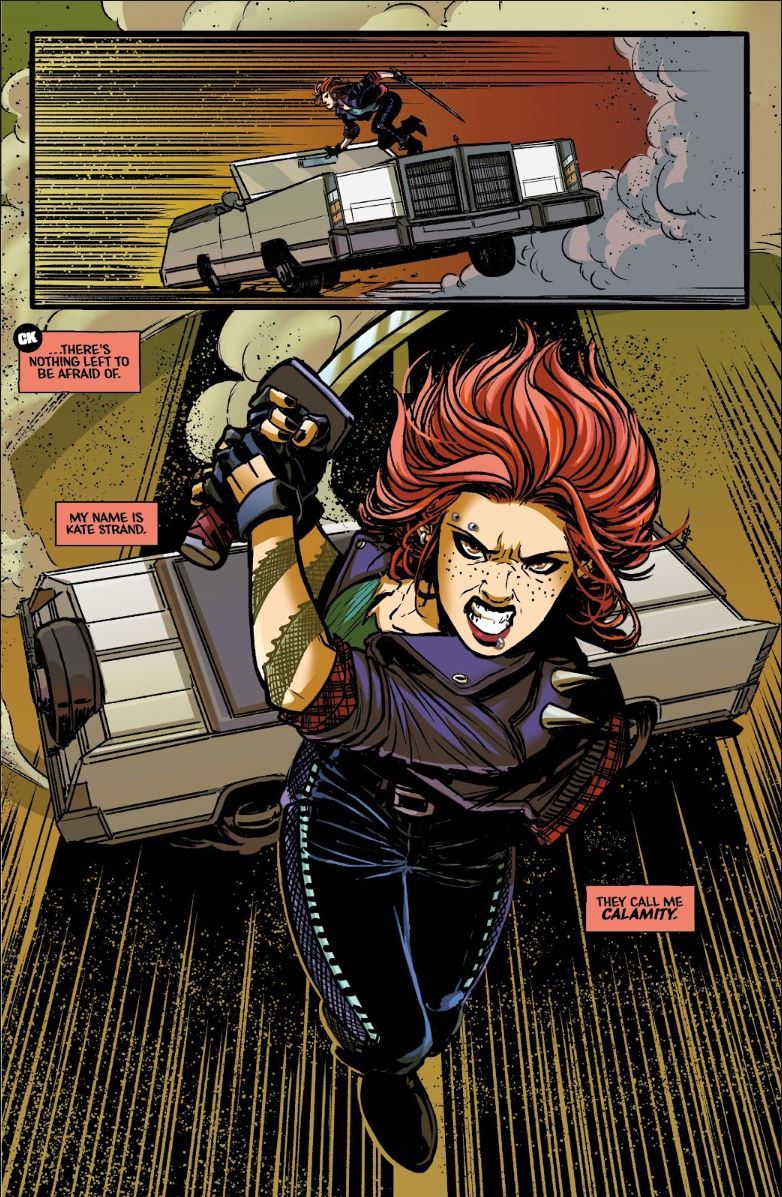 CH: I mean I was just kind of going back to Fooly Cooly. Like I remember maybe the fourth episode? Where Haruko is dressed up as a Playboy bunny and she’s fighting this giant monster that looks like an old ‘20s gangster, and he’s got like this giant shotgun and she’s never standing still. She’s running up the shotgun with her guitar, flipping, rolling, bouncing and then literally taking the blow with the guitar.

MV: That’s interesting. Fooly Cooly is also like a huge influence on myself which is funny because I don’t think I’ve seen it since 2006.

CH: Oh, I own it. I watch it like once every few years.

MV: I think it’s funny because considering how I was handling my side of choreography, I was kind of going for that same kind of thing. So, I guess that was one of my influences. Fooly Cooly seeps into like everything I do as a good show with a badass soundtrack. Still own that soundtrack.

BNP: Who would you like to play the role of Kate if the book ever got adapted?

MV: I’m so bad at that. I don’t cast. Other people are like “Oh, they should play them.” And I’m like yeah, sure. Whatever they say just becomes my choice.

CH: That’s a tough one, actually. Maybe Emma Stone. She could pull off the kind of facial expressions that I would want Kate to have.  She’s expressive enough.

BNP: So one of the things that I noticed—I had to go back and double check—but there were no men in the issue. And I thought that was really interesting and dope. I feel like that had to be on purpose, right?

MV: Oh, god. That never even occurred to me!

CH: I think there’s like one in the background somewhere.

BNP: Maybe one. Definitely nobody with dialogue, though.

MV: That never even occurred to me! Holy crap. Totally accidental. I don’t know if it was necessarily an unconscious influence, but I mean I populate my comics with empowered women characters.  That’s absolutely a priority for me. But I guess I’m neglecting the boys (Laughs). I think I wrote the reporter as a guy, and you drew a woman.

CH: It just said reporterm and I just defaulted to like a cute chick. So, that’s what I went with.

BNP: So, what’s been the most fulfilling process of developing this story?

MV: Oh, publication always. Always publication. Because then it’s out there and it’s in the world. And people can react to it and they’ll have their response, and their response is their internalization of the story and what it meant for them. That’s when a story comes to life. When other people get to bring their experience to it.

CH: Coming from a person who’s worked in IPs and licensing for a while, finally being able to spread my wings and do what I’ve always wanted to do—draw horror and monsters and just everything that I draw on my off time is what I’ve always wanted. And I mean I also have a pitch in the works that is gonna involve this and actually does have two main male characters (laughs). But like being able to draw this and show it to the world that, “hey I actually love doing this a lot.” It’s just like Ta-da! This is what I love doing, please like it!

BNP: What would be the one thing you’d want fans to take away from experiencing this story?

MV: I try not to worry about that. For me, I just try to work on portraying the emotion, honestly. And giving people something to react to. I can’t control what their reaction is. This goal was for me always. I’m having these emotions. I’m having these impulses. And I want to explore those in a way that feels healthy. And if other people take something from that, that’s good, that’s up to them. I did the work that I needed to do. And any emotional work or analytical work or any other type of internalization that a reader does, that’s gonna be their experience with that.

CH: Being able to inspire some young artist out there is kinda what I want. That’s always been my thing. I grew up in a very religious community—not really religious, just really uptight. And being an artist meant you were always gonna be poor. You should consider being a nurse or whatever. And so I would always say F You and keep drawing anyways. But I wanted that kind of inspiration like you know, it’s okay to pursue your love of art and kind of inspire other young artists out there as well.

Calamity Kate is a mini-series published through Dark Horse that debuted on March 13th. If empowered women figuratively and literally killing demons is your kind of things, show support by picking up issue one at your local comic shop!