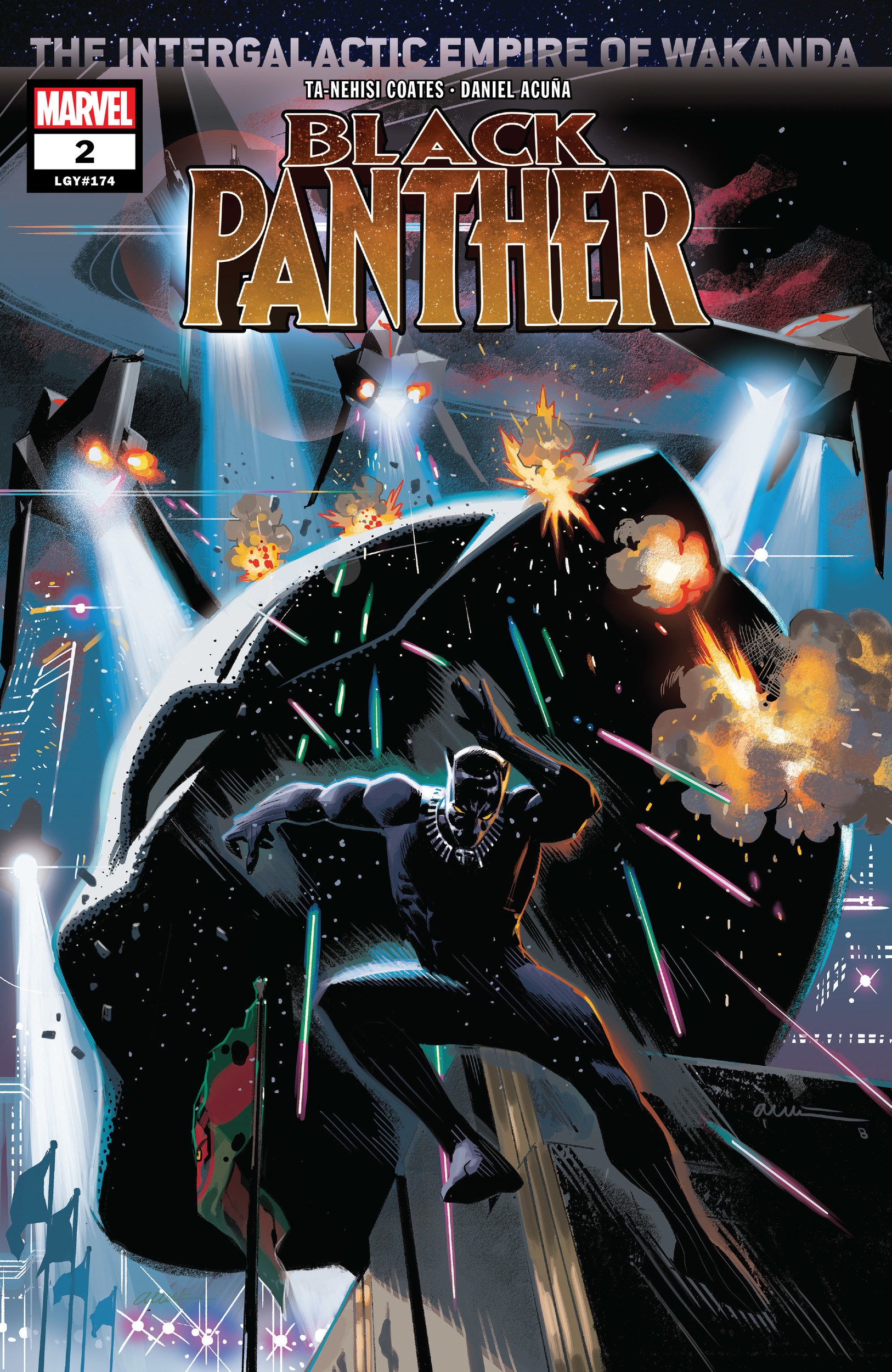 In Coates we trust.  The second issue of the “Intergalantic Wakandan Empire” story reads like the “Star Wars” film you wish  they made – kinetic, rebellious, and slick with a an air of mystery.  Are you craving a Nubian “Tron?” A Kemetic “Battlestar Gallactica?  As the standout series of Marvel’s “Legacy” initiative, “Black Panther #2 ” continues to make it own rules.  The current storyline follows the rise of a brain-wiped mining slave who claims the name T’Challa as he joins the ranks of the rebel forces known as the Maroons. Through the haze of his stolen memories, faint images of Ororo (Storm) beckon him to another life, driving him to fight the powers that be.

The Maroons are deep into a raid in the Shango Array when the Wakandan empire dispatches its Masai fights to bring them down.  M’Baku and Nakia call for retreat, pulling back their forces, but T’Challa pushes forward. He pilots a Zulu fighter as if he one with the machine, outgunning and outmanoeuvring the imperial forces.  Mysteriously, he has a sensitivity unlike any other – he not flies faster than the other pilots, but can cloak his Zulu fighter at will. 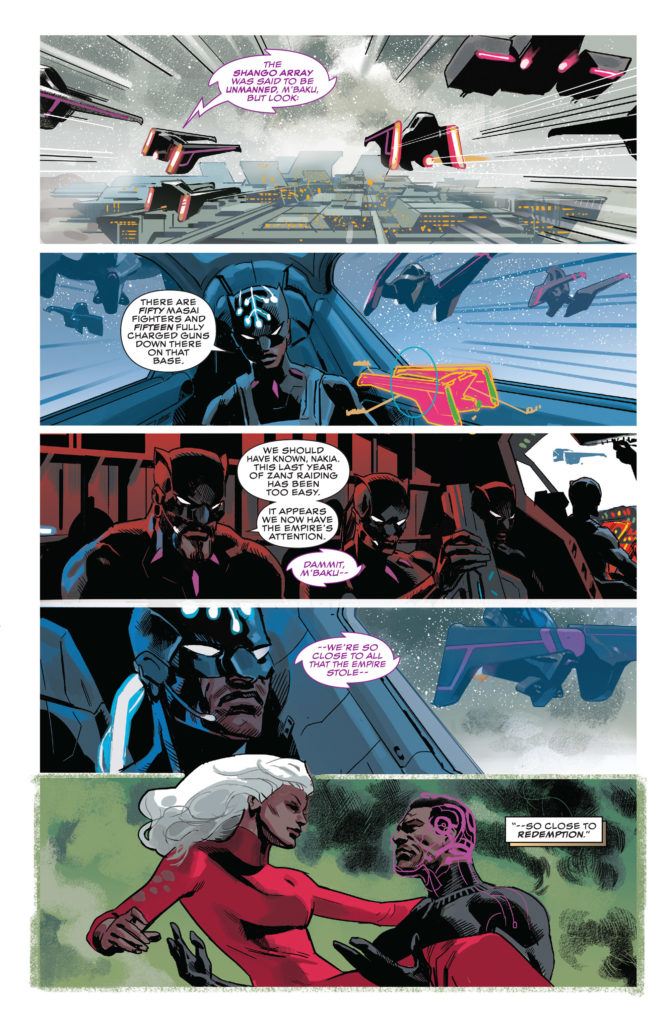 The raid succeeds, even though T’Challa’s bravado almost gets him killed.  They return to their cargo the Mackandal for N’yami uncover –  the M’Kraan Crystal.  News of the attack spreads to the top ranks of the Intergalactic Empire, drawing the ire of none other than Emperor N’Jadaka.

The Age of Killmonger?

The revelation of the M’kraan Crystal was a huge mic drop at the end of the issue.  Next to the Infinity Gems , it is the most powerful artefact in the Marvel Universe.  As the only surviving piece of the M’kraan homeworld from a race believed to be as old as  time, the crystal is referred to “the end of all that is.” X-Men fans will recognize it as the sought after item in the “Age of Apocalypse” that eventually helped reset the world to its proper timeline.  Fittingly, its creators named the crystal “the end of all that is.”  Its appearance supports the case that the current storyline is a result of some disruption to reality. Enjoy it while it lasts because only two issues in “Black Panther” stands as the Marvel comic most worth more than its cover price.  This altered timeline even drops two welcomed returns form the Christopher Priest run. Achebe, T’Challa’s one time usurper and stepfather, serves as Councillor to Emperor N’Jadaka. 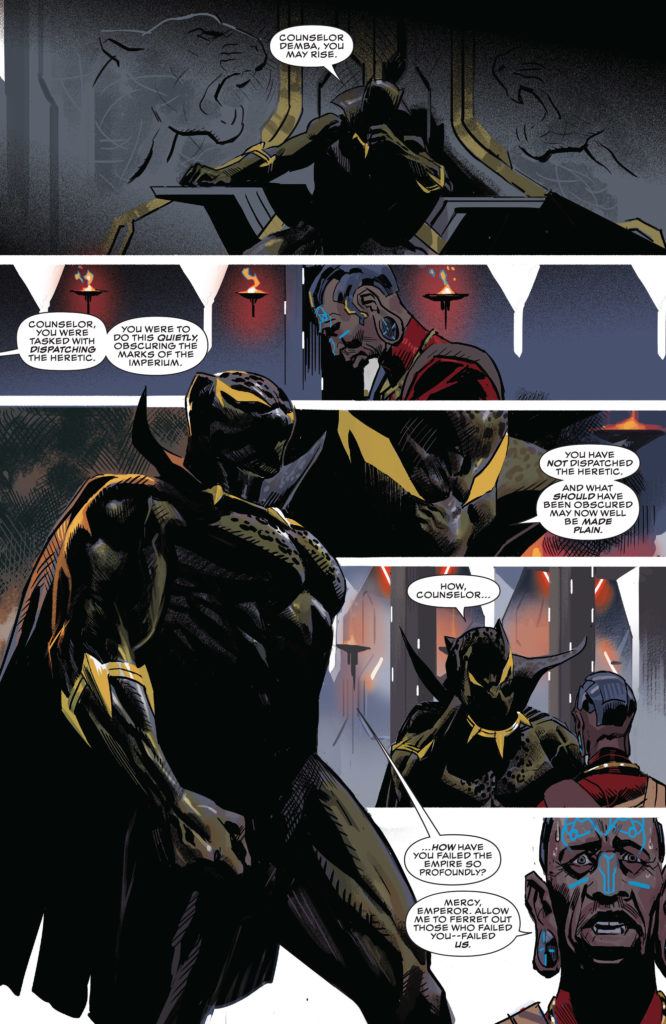 The re-envisioning of these familiar Wakandan characters by Daniel Acuña leaves your eyes studying every detail. His stunning design of Lord N’Jdaka brings back the cape of Marx Texeira and Joe Quesada’s design in the Priest-run, while also hinting at the costume work by Erick Killmonger in the “Black Panther” film. Hype hype hype.

Make no mistake, Coates laces some fitting references within the narrative of this issue. In order to light the path to for the young Afronaut, below is a list of terms and individuals who inspire the spirit of enlightened dissent.

MACKANDAL – Francoise Mackandal (? – 1758). Legendary Maroon-leader of Saint-Domingue who organized several slave rebellions and was the first to decry that the French would be overthrown.

MASAI – The ‘Maasai’ are a pastoral ethnic group of over 1 million split between Kenya and Tanzania. By oral history, they originated in the soouthern Nile Valley and migrated south in the 15th century.

MUSA – Musa is the Arabic name for “Moses.” In Hebrew, the name is transliterated as “Moshe.”  The name derives from the Ancient Egyptian word ‘musa’ meaning “newborn.”

SHANGO – In Yoruba tradition, Shango is the deity (orisha) who rules over of Thunder and Lightning.  Throughout the Afro-Diaspora, his name is also rendered as Changó, Xangó, Sango, et at.

ZULU – The largest ethnic group in South Africa. They were united under the leadership of Shaka in the 19th century after being one of many tribes amongst the Nguni clans.

If you made it this far, you should be reading the series.

10 out of 10 Dark Wakandan Empires