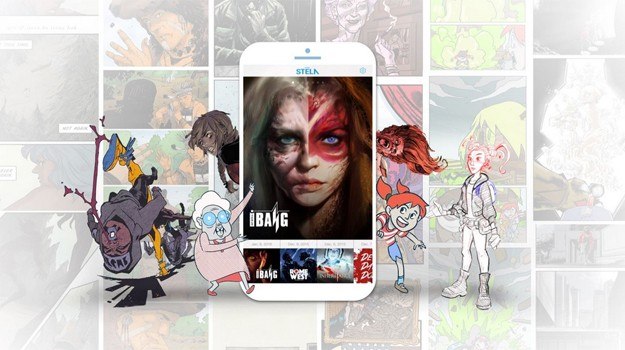 As a woman of color who loves comics, I spend a lot of time searching for works that are not only dazzling, original, and written with riveting narratives, but also intersectional; it goes without saying that this process can feel exhausting after finding so many that just miss the mark.  So when I first heard about Stela, the supposed next step in comics evolution, I was understandably skeptical. A comics app that took the internet by storm earlier this year by introducing comics created specifically to fit the format of your smartphone, I was sure Stela would be filled with the tired stories starring white cishet men and an occasional token thrown in. To my surprise, however, the app offers not only an incredible array of visual stunning and fresh ideas, but the comics star characters from all walks of life— including a majority that place women in the spotlight.

Now for some this might not sound revolutionary given the abundance of digital comics available, but believe me, having downloaded it I can tell you nothing yet compares to the ease with which Stela users can simply scroll through their comic without jumping from panel to panel or awkwardly enlarging for that one illegible word balloon. If there exists a beautiful middle ground between the slow reverence of reading a comic book and the seamless fluidity of motion pictures, the Stela team surely has found it. While every single comic on the app is worth reading, here are five in the particular (including some sneak peaks) that build their stories around women or girls and will have you begging for the next update. 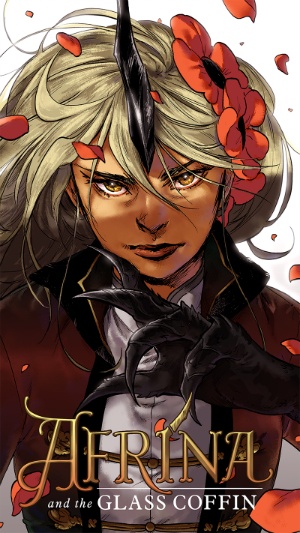 You know what the world needs more of? Badass fantasy stories starring women of different races with the potential for tear-jerking romance. Created by Irene Koh, whose work can be found most recently depicting Batgirl in DC Comics’ Secret Origins series, Afrina and the Glass Coffin tells the tale of the heroic Princess Afrina who’s willing to risk it all to save her kingdom from the evil attacking it… until she discovers that it might mean choosing between someone she could love even more. Can a rare magic unite these two princesses, or will the curses that secretly haunt them ultimately drive them apart?

Reading Afrina was like the first time you taste your favorite meal; it may look absolutely appetizing, it may have all the hallmarks of things you know you’d love, but there’s no way to prepare for how thoroughly gratifying the experience feels to the last bite. Breath-takingly gorgeous artwork, engaging characters, and an enchanting story whose mystery just eludes you, this comic is a must read. 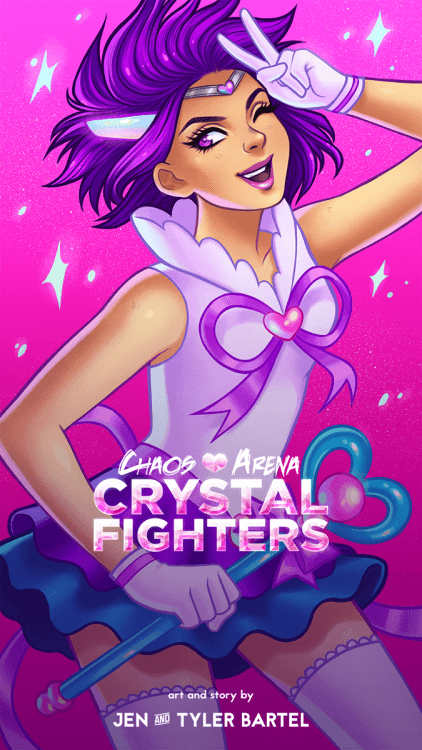 I’d be lying if I said this comic wasn’t the number one reason I downloaded the app and would still be worth it if it were the only comic available. In a universe where virtual reality games are as commonplace as Candy Crush, teenager Stella Kim just wants to “enjoy a little carnage,” but her strict parents insist on her trying the extremely feminine-looking Crystal Fighters instead. Little does Stella know that beneath all the frills and ridiculous high heels is an underground fight club where the strongest come to break the rules as well as each other. Now that she’s finally gotten her wish, can Stella make it out alive, or will she discover just how sinister the dark side of magical girls can be?

While I’m a bit of a magical girl fanatic, my endless hunt for sparkly transformation sequences has taught me over the years to look for only the highest quality, and Chaos Arena: Crystal Fighters shows the potential to not only catch up with beloved classics like Sailor Moon or Puella Magi Madoka Magica,  but perhaps even surpass them. Between the vivid world building, believable characters, and hilarious magical girl in-jokes, husband and wife team Jen and Tyler Bartel hardly need to mention the impressively stacked resume of experience this comic stands on. Bonus: you know for sure none of the Asian girls will ever have those obnoxious streaks in their hair. 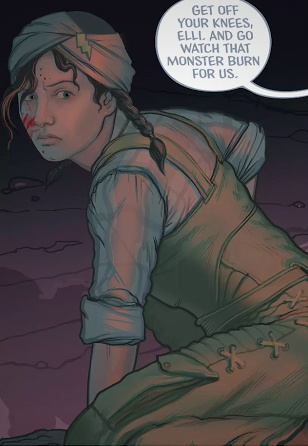 What makes a monster a monster? Though The Dark Divide poses this question in its first chapter, we’re never quite given the answer so much as more questions about our own natures. Starring Elli Rath the painted lady’s daughter, this comic sneak peak is a glimpse into the grim truths of prejudice and fear, and how mythical beings may not be all we have to fear.

If you love the unshakably eerie atmosphere of a good Tim Burton movie (and I do), then this comic is surely for you. Blackman’s writing paired with Stribling’s art evokes a microcosm somehow timeless and fantastical; we only see a small portion of the festival grounds yet Elli’s emotional narration makes the setting feel much bigger. The fact that Elli’s face isn’t revealed until much later, especially after a lovingly poetic description of the fire eater’s daughter, Gillian, makes me suspect there might be a romantic attraction explored further on down the line as well. Whatever is in store for Elli, you can be sure it will give you the chills of only the best kind. 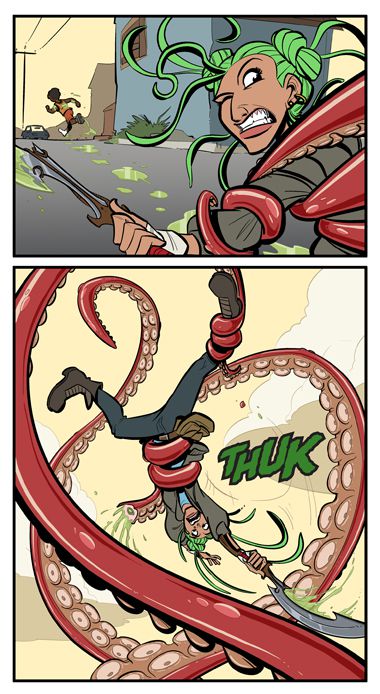 Being a teenager sucks, but nothing makes puberty worse than being a descendant of the Great Old Ones, gods of unspeakable power beyond human imagination. I mean, can’t a brown girl rock her fly green hair and punk style without having to go all Buffy The Vampire Slayer all the time? Apparently for one Calla Cthulhu, not so much.

Like The Dark Divide, this series only has a sneak peak available at the moment, but the panels pop with irresistible action and a story that’s just visually fun to read.  Despite barely any dialogue being spoken, the dynamic battle between Calla and an unknown beast keep you on edge until the very end. I for one can hardly wait to see what happens when Calla is forced to subject her unmistakably independent attitude to the will of the unfathomable beings she calls family. Also, any comic that can make a famous racist like H.P. Lovecraft roll in his grave by re-purposing his mythos for the sake of people of color deserves instant support. 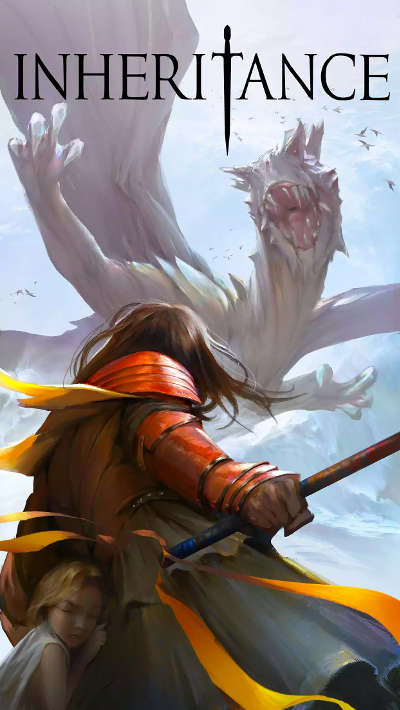 From the editor-in-chief of Stela itself, The Inheritance presents a sweeping epic of a father and daughter struggling to survive in a land where no one can be trusted thanks to an ancient prophesy coming to fruition. Although Marra appears to be just a small girl now, the potential she holds in her body could grant her the power to become the most powerful wizard on the planet… if someone else doesn’t claim that power for themselves first. How do you protect someone infinitely stronger than you when every move you make could be your last? More than a story of magic and hope, The Inheritance tells of the unbreakable bond between a father and daughter when there’s nothing left to hold onto.

While this particular comic also stars Marra’s father, Velicos, it’s Marra’s thoughts, feelings, and actions that are at the crux of every moment and ultimately who everyone finds themselves at the mercy of. Watching Marra grow mature not only into a girl capable of wielding her own magic, but a person learning how to care for herself and others against impossible odds really helps redefine what you might typically consider a strong female lead. Every chapter brings new dangers and an endless stream of enemies with a thirst for power, so you can’t help but hold your breath wondering if this family is strong enough to stay together or if their luck might just run out.

Interest piqued? You can download Stela today from the iTunes app store and read the first chapter of every comic for free, and if you like what you see the next chapters are available for a subscription of only $4.99 a month (which, when you consider how much a monthly single print issue can run you, is a steal). Don’t worry Android users! You can sign up here to be the first to know when Stela is available for you.