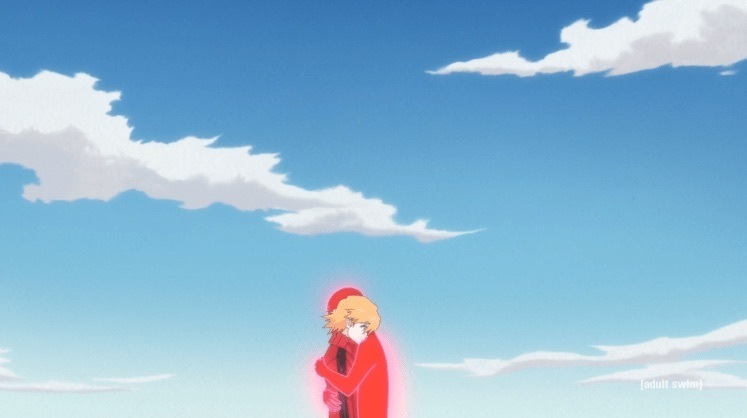 Fooly Cooly comes to the end of it’s season with a bit of a message in its own fooly cooly way; if you want something, quite your complainin’ and go after it! Ok, so maybe it was a bit of a shallow end, especially compared to last season, but it was still a fun adventure and I’m looking forward to what they bring next. 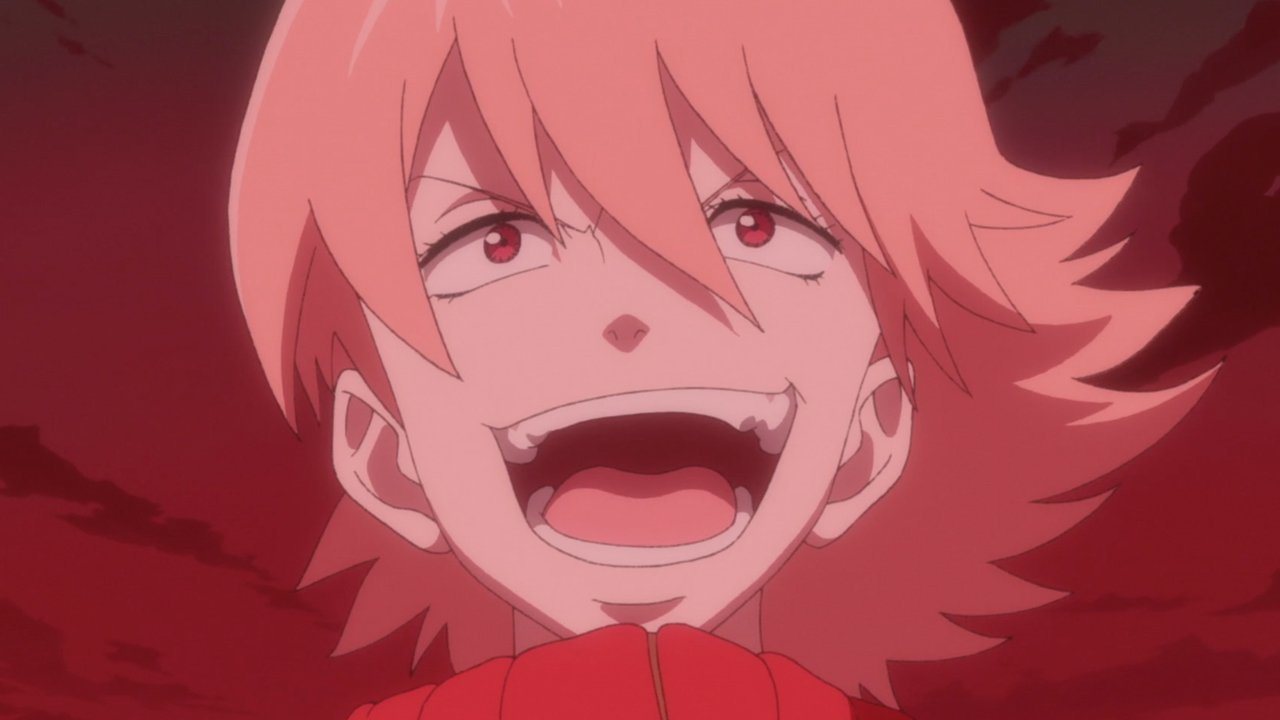 Episode 6, “Our Running,” begins right where the last episode left off with arrival of Atomsk. Haruko then constructs a giant birdcage to try and capture him. Hidomi tells Haruko to get loss a give Ide back to her. This is probably the most profound moment of the season. Haruko berates Hidomi, calling her a child for wanting something just because she’s demanding it, and that she won’t get anything by whining. But if she gives up her power to Haruko, she’ll then make a deal. Hidomi knows this is BS and proclaims that if she really wants something, she’s just going to take it. And Haruko congratulates her, “You get a gold star!” It’s not about words, it’s about action, and Hidomi jumps into action and attacks Haruko. When the cage is complete, Haruko plans to capture the pirate king; however, Atomsk is too large and ends up sucking up Haruko and Hidomi instead.

During this, the Medical Mechanica factory is attacking people with mochi and turning people to stone (or harden mochi?). In the midst of this chaos, Iko finds her house and father crushed by the mochi. He gives her the savings she was collecting and tells her to run. Mori meets up with her and takes her to go find the potted plant which is “the trigger.” Look, I know what FLCL is, but even this episode was lacking in terms of its story. It was all over the place, more so than usual. 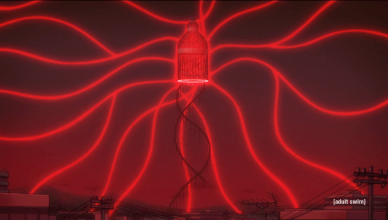 Inside Atomsk, Haruko and Hidomi find an old lady trying to get Canti’s head to work. At the same time, Iko and Mori run into Hidomi’s mother while looking for the potted plant. They find it at Ide’s place and as soon as Iko touches it a giant plant pops out of her head, and she connects to Canti, allowing Hidomi and her mother to talk. They clear the air about closing down the family café, and Hidomi wants to wait for her dad while her mom feels it’s time to move on and be a better mother to her. They both agree to reopen the café but for themselves and not for anyone else. It’s a sweet moment, if a bit sappy.

Attacked by a giant monster, Canti springs into action to save Hidomi. He then completely destroys Hidomi’s headphones, allowing her to transform into the robot we saw in the beginning of the first episode. Meanwhile, our group on earth goes to the Medical Mechanica factory, and Iko uses the plant to transform into vines that grow around the factory. Haruko and Hidomi escape, only to find Canti, who shows both the sign of Atomsk and Ide, on his screen. The two proclaim they have to take what they want and fight and race up to Canti, simultaneously giving him a kiss. This results in Haruko getting the power she’s been longing for, if only for a brief moment. She can’t hold the power and literally throws up the pirate king. Canti also throws up; however, it is Ide who emerges. 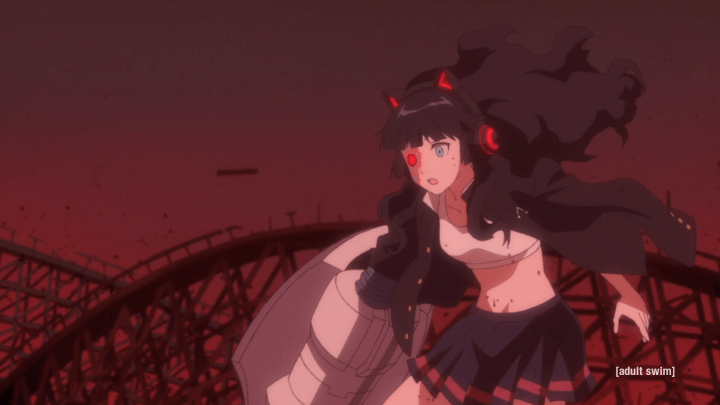 This is the best moment we get out of this season: an actual, vulnerable, and sincere Haruko. Frustrated, Haruko angrily attacks Atomsk, screaming and demanding to know why he keeps refusing to become hers. This anger gives way to sadness, as she can’t understand why he keeps refusing. Of course, it’s the power she wants, but it’s the first time we she genuine feelings of love from Haruko. The two embrace, and as Haruko kisses Atomsk, his power frees itself and flies away, leaving behind Jinyu in his place with Haruko bawling in her arms. It was nice to see a bit of humanity from Haruko instead of her just being a force of destruction. It’s not the first time, but it’s the deepest we’ve ever gone with her.

And then we get a cheesy “happy ending” for most of our characters. Iko returns to normal, and Mori get’s his girlfriend. Hidomi’s mom reopens the café, albeit destroyed, with Canti even working there, and Ide has a really awkward talk to “let Haruko down easy.” Haruko laughs hysterically and heads off to chase Atomsk again. The old lady from the satellite restores Iko’s dad and the old man. This is where we have my favorite revelation when it is revealed that he is the son of Eyebrows from the first season. He even has tiny eyebrows like his dad, and I nearly died laughing. 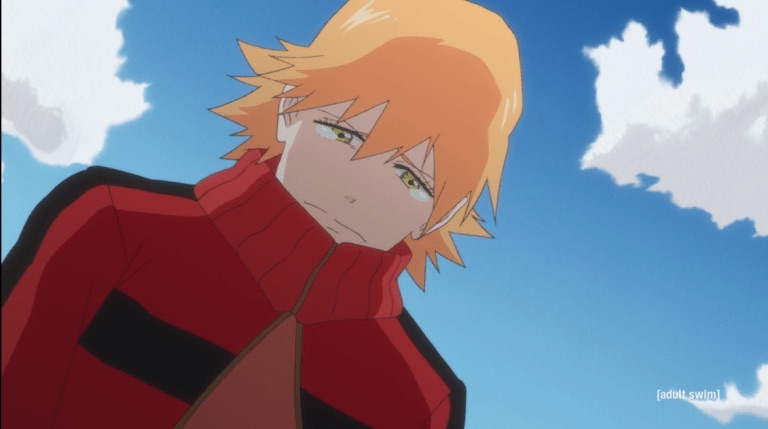 This season was really chaotic, and this episode was the best example of this. It wasn’t the best episode and not the best ending, but it was still decent. The first season was truly something special. It’s not surprising that lightning was caught twice. It’s still worth a watch for fans of FLCL and newcomers. I’m looking forward to seeing if we get some more character development from Haruko considering where she ended in this episode. Join us back in September for season three, Fooly Cooly: Alternative. 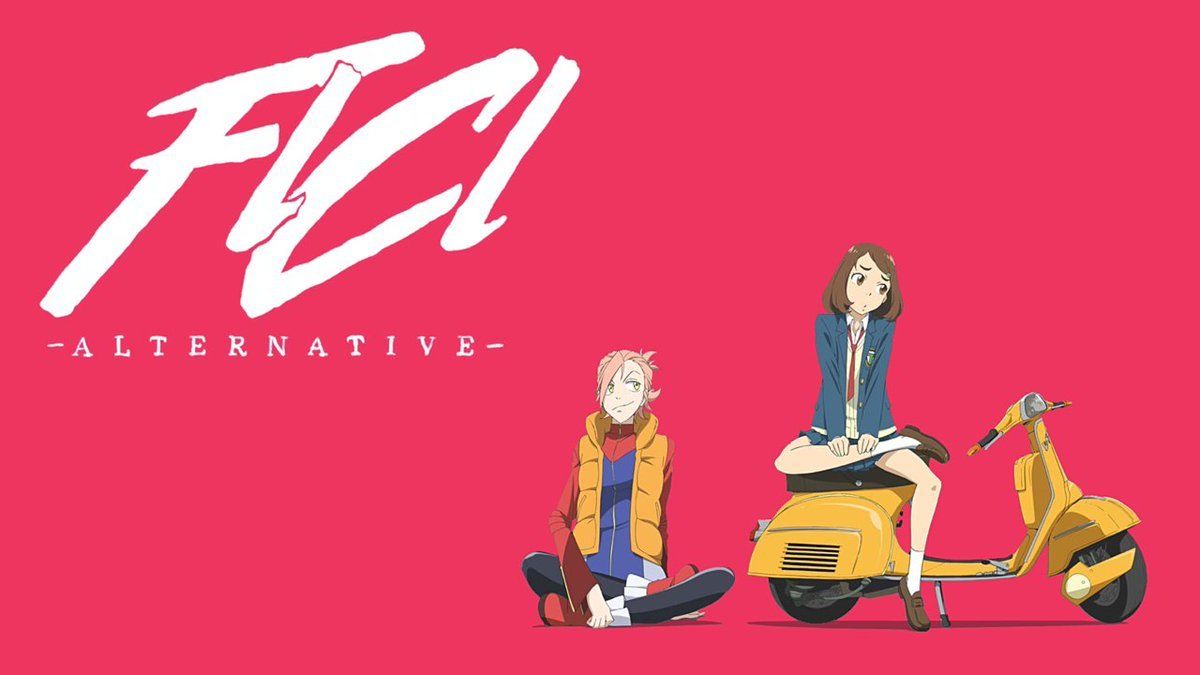