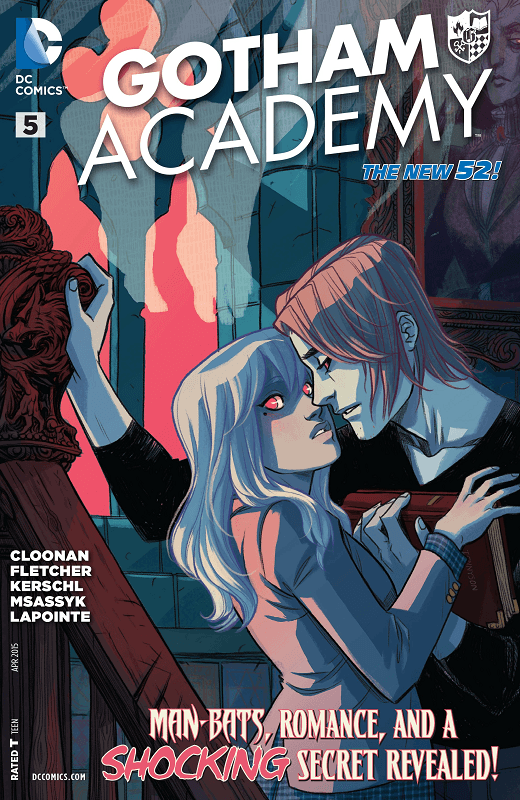 The rap game is Gotham Academy, y’all. Are there other great stories? Definitely. Are there better characters? Maybe. Is there a DC series more fun to read? Not on your life. In a universe all too serious and with a crooked city like Gotham, the Academy makes this place livable, like “It’s okay! Look – children are here! Regular, mischievous children!” Tie them in with some classic Gotham lore and the happiness long forgotten in the city, and this comic has me seriously considering my stance against raising children in New York.

Issue #5 is no exception, as this is the closest we’ve seen to a fully Maps-centric issue. She doesn’t lead the story – Olive drives this one again, and drives it well – but Maps drops mixtape bars that leave you waiting for that solo track. How would you react if you were in a decrepit building, found yourself trapped, and ran past Killer Croc? Because this is how Maps handles such situations:

And she doesn’t even stop there! She goes sprinting around corners, runs into Olive, and does a situation report cause she’s oh so militant.

“Crap! You won’t believe this – I saw a Lizard Man! Lots of hit points but they never drop anything good. Friend or Foe?”

Clone this child. Clone this child and spread them throughout the states. Maps and Olive run into Killer Croc, and Olive – who previously morphed into full fearless Buffy status in issue #4 – wants nothing more than to interrogate him to learn more about her mother. When he dashes away, afraid of being caught and sent back to Arkham Asylum, Olive and Maps chase in pursuit through the underground tunnels. Maps pulls her compass the way you did playing capture the flag on Xbox Live, like “I know where we’re going! Unless my compass is wrong – haha, but seriously though, I’m better than satellite.” They hit a dead end and lose track of Croc, and that’s when they decide to get the band together to catch that body in the vacants during the school dance.

In the middle of it all Olive can’t help but engage that flutter in her chest though. Two seconds after Kyle says “yes,” Maps is already tossing out the notion of Cinderella and Prince Charming and explaining their plan to ditch her brother. This is a mission, fam. We don’t need these distractions. The squad changes costumes and Olive comes out in a white dress with lace, and Maps with the chic black blazer. Team Academy hits the dance with their perfect plan to ditch it.

The rest of the issue answers one of our homework questions from previous reviews, while throwing readers for a crazy loop at the same time. Sharing those details here would be a disservice to Gotham Academy’s storytelling, but buy the issue yourself and trust you’re in good hands. Our homie Olive continues to be relentless in her search for answers, and someone gives that compulsive girl a crossbow – if that’s not reason enough to read this book, I don’t know what is.