I am not a fan of endings. There is something about the tidiness with which endings are usually presented that bothers me. So I put off watching the series finale of Grimm for about a month. I know it was a trash move, but in my defense, I like the show and I didn’t want it to end. (Now ask me how long it took me to watch Firefly?)

So when last we saw Nick he was watching his partners, Hank and Wu, die at the hands of Skeletor/Zerstörer in the precinct. And all the magic stick in the world can’t bring them back. What happens next is pretty simple to explain:
Zerstörer kills er’rybody.

And these are no “go gentle into that good night” type deaths. Unless the thing going gently is Zerstörer’s staff (minus the one piece of magic stick Nick still has) as it goes into the throats/abdomens/appendages of all of Nick’s loved ones.

He’s so savage he makes Eve kill herself.

And then he takes out Adalind.

I mean… Monroe and Rosalee get to die together Romeo and Juliet style. Except that means they’re forced to watch each other die.

Then his third cousin on his mother’s side catches the fade.

Don’t get me wrong before he was handing out Ls to everyone, there was an attempt at some anti-worst-evil-ever magic…

There was a spell, roughly translated as Strength of Blood, so Rosalee whipped up what she could right quick then added the special ingredients: co-mingled blood of a Wesen, a hexenbiest, and a Grimm or some such wisdom found in an ancient text. But listen, fam, it ain’t work. If you don’t believe me, you can scroll back up to the morgue made out of all of Nick’s friends.

So Nick is alone and crying and sobbing and pretty much like this for most of the episode: 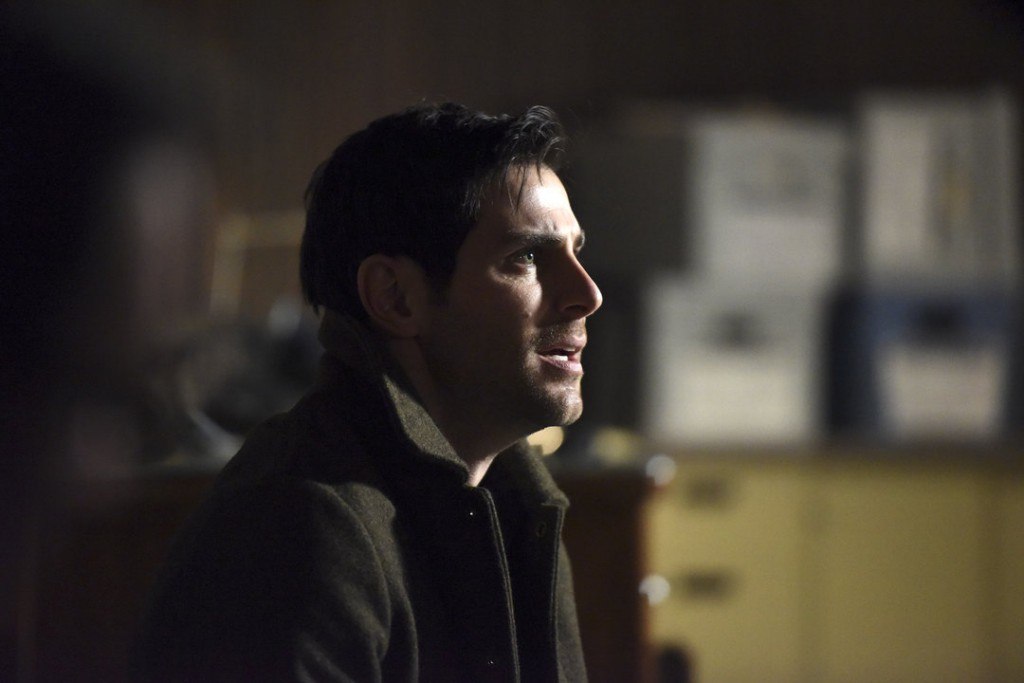 [divider type=”space_thin”]
My dude is questioning every choice he’s ever made. Which is exactly what Zerstörer wants. Turns out the Evil can’t take the magic stick from Nick; Nick has to give it to him. So Zerstörer kills everybody then brings Trubel back to life like “look what I can do for everyone you love. They don’t have to be dead.”

But Nick misses his friends and partners and who’s he gonna hang out with on Friday nights?

So they end up fighting because Trubel is clearly right; Nick is a tornado of emotions. Nick ultimately wins the fights but as he’s walking back to be weak-ass some more, we get the full mashup of the book of Job and Brother Bear.

Dude is being tested. So tested. But then…

His mom and aunt — yes his dead mom and his dead aunt — show up like “Why are you embarrassing us like you ain’t got no home training? Did your people die? You sad? I died and you ain’t see me be a punk about it. What do you think this is all about? You think I faked my own death and let you grow up with out me because Grimmin’ is easy?”

So Nick recognizes the absolute uncut weakness of his ways and they roll up on Zerstörer (along with Trubel who is still functioning after the ass whooping she received because she ain’t weak either).

So they beat Zerstörer’s ass except Trubel can’t see Nick’s aunt or mom. Diana can because she’s still creepy AF, even during the end days.

Nick’s mom and aunt give him some advice and then disappear back to chill with Obi-Wan. The Strength of Blood wasn’t a spell as much of it was an admonition that family has your back…

…especially when you come from a badass family like Nick’s.

So Nick is left with Trubel, Diana, Kelly, and a bunch of corpses. But then Zerstörer’s body kind of collapses in on itself and creates a portal to the other world. Nick gets sucked in and spit out into Monrsalee’s living room, into a scene from the episode where Diana is touching grown folk’s stuff (like the magic stick, like the mirror Eve walked through).

[divider type=”space_thin”]
So no one but Nick and Diana know what happened. Then we jump cut to 20 years in the future.

Kelly and Diana (and the Monrosalee Triplets) are the new generations of the Wesen-fighting Grimm gang. And mom and dad are still in the mix as well.

I’ll be honest. I didn’t love this episode. There was so much that they tried to do and just couldn’t fit into one episode. I already noted, but it bears repeating, that they killed off all of the characters of color before the last episode. Nick ends up with his rapist.

And the whole thing is tied up so very nicely in a bow. And, um, nope. Why can’t the writers let a dark(ish) show be dark? Nick’s mom made all sorts of sacrifices to fulfill her Grimmly duties. Why couldn’t Nick lose everyone? I mean how interesting would the future be if it was Trubel and Nick raising Kelly and Diana alone. Why did we need the Leave It To Beaver revision?

I did like that it was the presence of strong female characters that made all the difference for, well, the fate of humanity. Without Nick’s Mom and his Aunt, he would have done the easy thing. I appreciate that it was the trifecta of them and Trubel that acted as the strong and willing-to-sacrifice-whatever-it-takes conscience.

And, I hate to say it, but Diana was underused. They’ve been hyping her as this next-level-Neo-chosen-one since her birth. And all she does in the final episode is be bait/ a trophy wife for Zerstörer. She is afraid of him and then, without warning, isn’t and is in fact on his side. What the what?

And Kelly? If Kelly isn’t screaming “Marsha! Marsha! Marsha!” at his sister it’s only because he can’t talk. I get that he’s a baby, but he’s practically nonexistent except when Nick needs a reason to fight/live/punk out.

I’ve watched every episode of this show and I still like it, but they did not stick the landing. Don’t get me wrong: I will re-watch episodes when I catch them in the eventual syndication/Netflix incarnation. I still like a spin on a fairy tale and I always will. Retellings are such ripe soil. BUT the evolution of the show wasn’t served by this very neat and bright bow they tied.