“Nothing, they say, is more certain than death, and nothing more uncertain than the time of dying.”

We start at Monrosalee’s house; they are covering every mirror in the house to try to keep Eve safe. Monroe is shook. So shook. He’s looking at his pregnant wife like “Are we sure we want to be roomies with a hexenbiest who is getting stalked via mirrors of which we have a lot of in our house?”

Cut to Eve who shows up at the loft to ask Adalind about how she can go through the mirrors. Eve’s looks at her like she’s captain of team horrible and reckless choices, which she is. But Eve knows that Adalind’s mother had a lot of books with a lot of hexenbiest-type knowledge. Adalind relents and gives Eve the book and Eve goes back to the Spice Shop to read. Adalind is waiting up for Nick to tell him what Eve is doing. Meanwhile across town, two women are out at a restaurant and one goes to get the car. I think you know where this is going. RIP character who was on the show for less than two minutes but is vital to the plot.

Wu, Hank, and Nick show up on the scene. Nothing missing. No weapons. They interview her friend who gives them no new information and breaks down in tears. Of course, they’re wondering if this is a Wesen crime.

Inside an assisted living facility, a caregiver is walking an elderly woman to her room when the woman starts reminiscing about running through the woods at night and the taste of blood. Wait, what? Fast forward a few minutes and ole girl woges and attacks the caregiver. He protects himself and a nurse walks in as he is choking her. She, of course, thinks he is attacking an innocent old lady. He, of course, is screaming about monsters.

At the precinct, Hank and Nick are researching the restaurant victim. Hank finds a similar victim in an adjacent precinct. Wu finds video surveillance of the victim but it’s not particularly useful. This whole time Eve is in the Spice Shop basement studying those books like the GREs are tomorrow morning.

After work, Nick goes to the Spice Shop to talk to Eve about the books and the mirrors and her quest. He emphasizes the teamwork aspect. As in “don’t go doing anything stupid by yourself.” She assures him that she won’t and keeps reading.

Back at the assisted care facility, a new and different Wesen comes in ole girl’s window and inserts some kind on antennae in her nostrils. Coincidentally the next day Nick, Hank, and Wu are called down to the facility because she dies in her sleep. When they get there, the nurse is happy to explain that the caregiver attacked the elderly woman and needed to pay. She thought he was high because he was yelling about her being a monster. Hank and Nick exchange that knowing we-dealing-with-a-Wesen look. Nick and Hank talk to the doctor on call. The doctor asserts that any injuries she sustained from the attack were superficial and that the orderly had nothing to do with her death.

Meanwhile, Renard is calling Adalind, pressing her about Diana’s drawings. Adalind’s answer is short and sweet: Take it up with Nick.

Nick and Hank roll up on the orderly and my man runs because of course he does. They tackle him and take him back to the station to interrogate him. The orderly recounts his tale of the woge and attack that night going so far as to describe the monster to them.

The worst thing is that Nick and Hank know it’s a wogen Wesen story, but they’re not sure how to help this guy not go to jail for killing an old lady, short of revealing thousands of years of Grimm/Wesen antics.

Eve has a breakthrough with the books (books that won’t open unless she woges). She calls Adalind in a frenzy excited about the possibility of blood magic—of paying her way to the “other side” with blood.

Nick and Hank talk to the Medical Examiner who confirms what the doctor said about the woman’s superficial injuries BUT she does say that there was an unusual concentration of a chemical found in the Assassin Bug’s saliva. So that was the Wesen who crept into her room and up her nostrils.

Elsewhere in the precinct, Wu is reviewing video of the crimes, both from outside the restaurant and the similar attack at a neighboring precinct. And has an aha! Moment.

At the Spice Shop, Rosalee is helping a regular customer, an older woman buying melatonin. She just looks sad, takes her melatonin, and goes. Just then, Nick and Hank show up asking about the deadly bug saliva. They tense up.

Turns out, the Wesen they’re looking for is a Godfather of Death. Monrosalee explain that the Godfather of Death ends the lives of Wesen who are suffereing from dementia because they can woge uncontrollably and hurt everyone, including the secrecy of Wesen in general. Then they reveal that they have a kind of living will AKA you-call-the-angel-of-death agreement.

After Nick agrees not to arrest the Godfather, Monrosalee contact the Wesen. They call a number and get a message to stay by the phone. They do, but Nick and Hank live.

Wu, meanwhile, has used the video surveillance to figure out that the same older man with a cane was at both crime scenes.

Renard pulls Nick away from this conversation to confront him about the tunnels and the writing. Nick is really feeling himself because he refuses to show Renard the tunnels and demands that Renard share what he knows and then my dude walks out of Renard’s office because who gon stop him?

Monrosalee are at home and get the call from the Godfather of Death so they call Nick and Hank back over. The Wesen arrives moments before Nick, Hank, and Wu do. Turns out it’s the doctor from the care facility. They ask about the woman who died and explain that the orderly may go to prison for the good doctor’s crime.

While they’re talking about to get the orderly off, the doctor gets a call from an actual Wesen who needs his particular brand of help. Nick and Hank are like we’re going with you. Then Rosalee realized they’re going over to sad melatonin lady’s house and she looks at Monroe like “we rolling, too.”

By the time they all get there, the woman’s husband is scared and confused and wandering around the streets. The doctor, Nick, and Hank get him back to the house. Turns out he’s the man with the cane from the video surveillance. The doctor has to do his job.

And then I flipped a table because feelings. 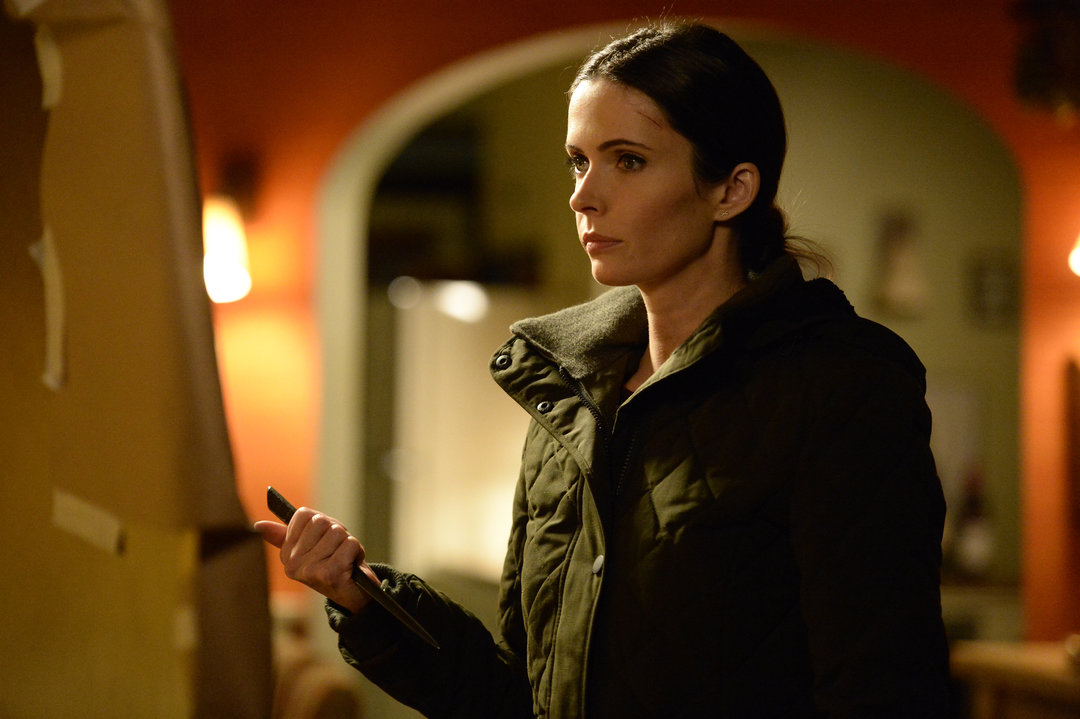 Luckily, Eve was doing dumbshit and that saved me from feeling. She may have found an answer to the big mirror mystery. She rushes over to tell Monroe and Rosalee, but since they weren’t home, she decided to smear blood on the mirror and go into it. Yeah, that seems like a good plan.

I have only one question this week: why?