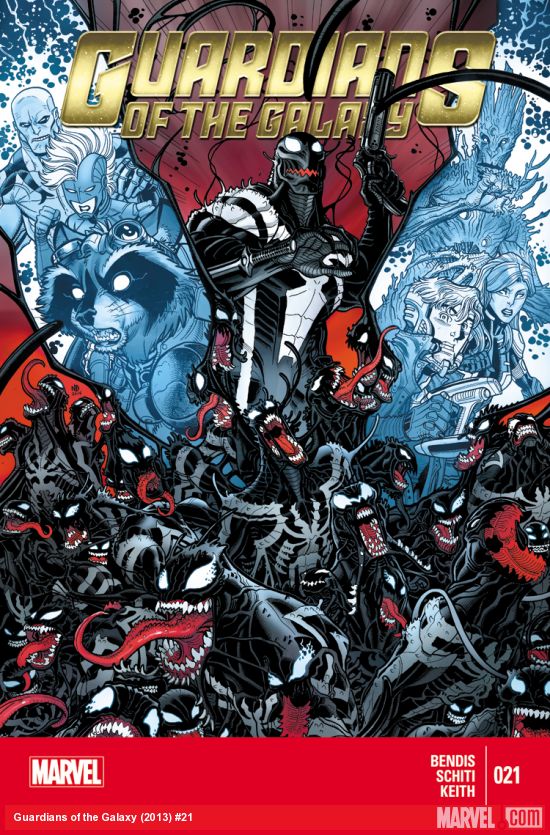 We learned the fate of Richard Rider and the weight that has on the team. We get an opening of Peter Quill telling Kitty Pryde how he usually hands a bad hit (by sleeping it off…with another woman…that he doesn’t know) but this time around all he wanted to do was to talk to her. When asked how the team was taking the news Quill says that everyone deals differently. Loved Bradshaw’s Drax getting his frustrations out in typical “I need to fight something” fashion.

The man story focuses on Venom or rather what Venom has become in his time away from Earth. Venom has become a shit load stronger and more dominant than Flash Thompson. We see flash trying desperately to get back home to Earth. A chance encounter with Gamora has him lashing out at her believing she is there to hunt him down. This is predominately the symbiote talking tho as Gamora engages in a battle with him. The team shows up and Quill uses a fail safe on Venom that gets Flash clear from the parasite.

Bendis has been dropping hints more and more as to us finding out more about the symbiote. In the years since it has been introduced we have never really explored where in space it actually came from. The aliens we’ve met thus far all know about the symbiote and wouldn’t want it near them at all. I’m really looking forward for the back story that Bendis has set up for the most famous parasite in Marvel.