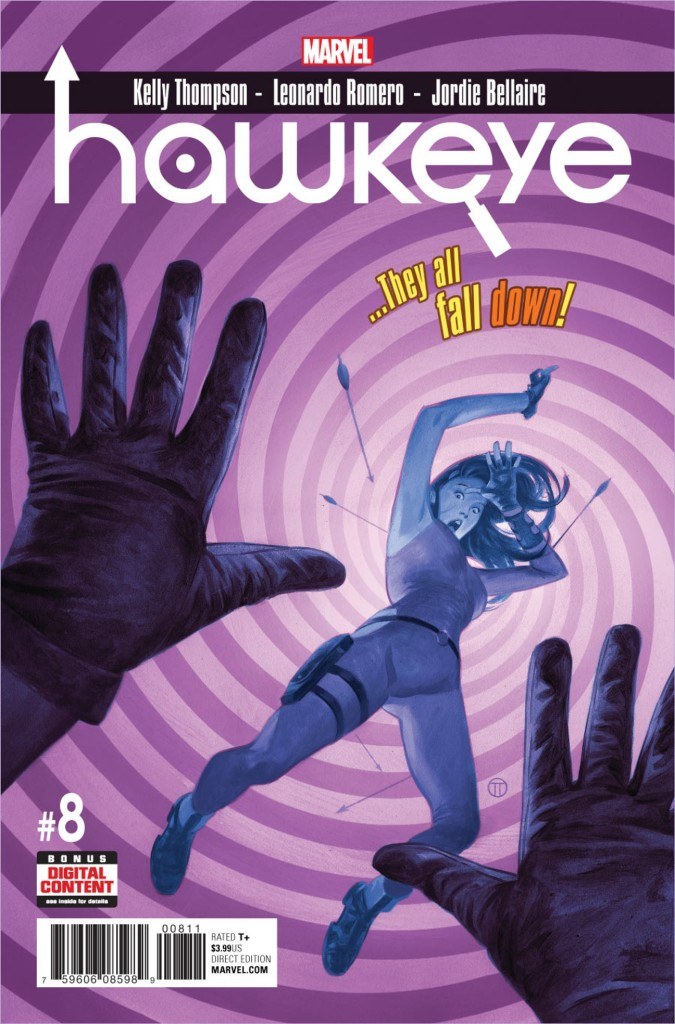 [quote_simple]”You underrated, over stressed, you underpaid
Do anything but just don’t quit and….” -Snow Tha Product[/quote_simple]

Your favorite writer isn’t fucking with Kelly Thompson. Your favorite artist ain’t fucking with Leonardo Romero. Jordie Bellaire and Joe Sabino, I see y’all too. I said everybody’s whole names so you know it’s trill. We got a saying in Black Nerd Problems whenever we need specific people for an editorial or when a group of us get something done timely. The saying varies at times, but the original phrasing is, “I GOT A WHOLE SQUAD FULL OF KILLERS!” I shouted that to say this: this creative team is a whole squad full of killers. This creative team is a murderer’s row.

This team got the baton pass for the spin-off of a critically acclaimed series, Hawkeye. Fraction and Aja proved that Clint Barton was more than just the guy with the bow or an easy punchline as a member of the Avengers. Thompson and Romero have built up Kate Bishop from a snarky badass to the most charming snarky badass lead character in Marvel with volumes of depth. You can’t deny how incredible Kate Bishop stands on her own as a character, as a series, and as the best Hawkeye (Deadpool said it so you know it’s true). Hawkeye is the book you read last on your pull list because you know gotta savor it. I light candles (Island Nectar) and pour myself some ginger ale (as if it’s an aged scotch) in a tumbler (not a lot cause it burns my throat), and that’s how I set the mood before reading each issue.

Thompson brings Kate face to face with her father as we saw in the last issue. Things have changed with Bishop’s dad as he is younger, but that’s the least of Kate’s concern. Thompson doesn’t only give us the showdown we’ve been waiting years to see, but another case for Kate Bishop as well in the same issue. We see the meeting with Derek Bishop and Kate’s adventure afterward. Thompson has the meeting between the Bishops play throughout the issue, as Kate takes on a case to help a daughter find her missing father — a father who may be in some illegal dealings.

Romero is a genius with the pen. I don’t know how many times or ways I can say it. You see that reflection as Kate stares out the window while talking to her father? You see that fucking exit that would put Triple X: Xander Cage to shame? I love it. Romero constantly has Kate moving beautifully throughout the series. Especially when it comes to action scenes, there’s a fight scene that displays just how disciplined in grappling Bishop can be. She straight up gave someone a modified version of Billy Gunn’s Fameasser finisher and I follow a simple life rule: anytime you hit a professional wrestling move in a fight, you won. Even if you lost the fight, you won.

I didn’t get that in-depth into the issue this week as it is best that it be seen. There are so many storylines weaved in together that I don’t want to spoil anything. Thompson does a great example of calling back to prior story arcs and tying up loose ends as a surprise for the reader, while at the same time starting a new thread for a different story to run parallel with the main story arc. Thompson is out here crossing folks over with the plot, dialogue, and storyline then passing it to Romero for the reverse windmill in the paint (that’s three sports references for those counting at home). Kate Bishop is living her best life under this creative team, I never want it to end. 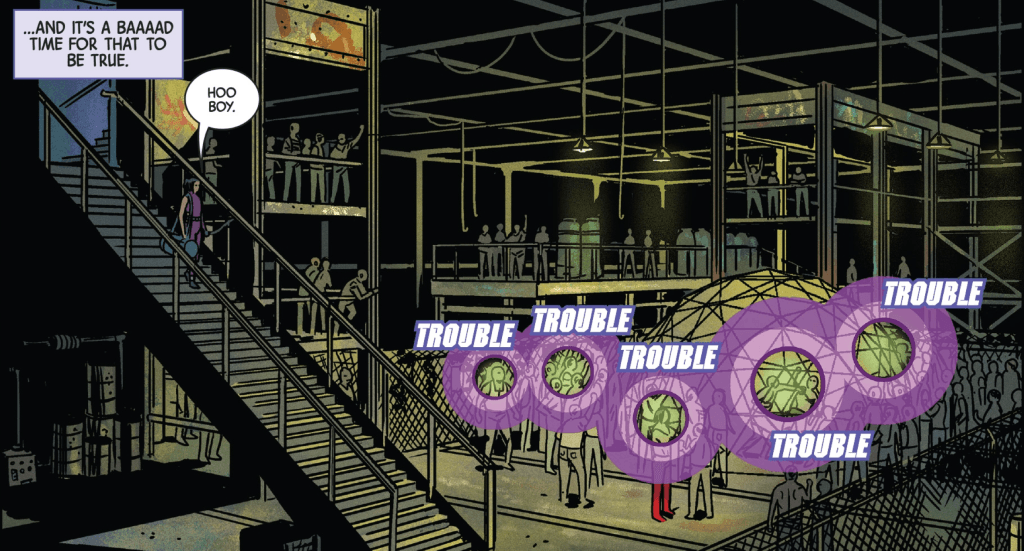 10 Perfectly-Timed Gladiator references out of 10

Reading Hawkeye? Find BNP’s other reviews of the series here.