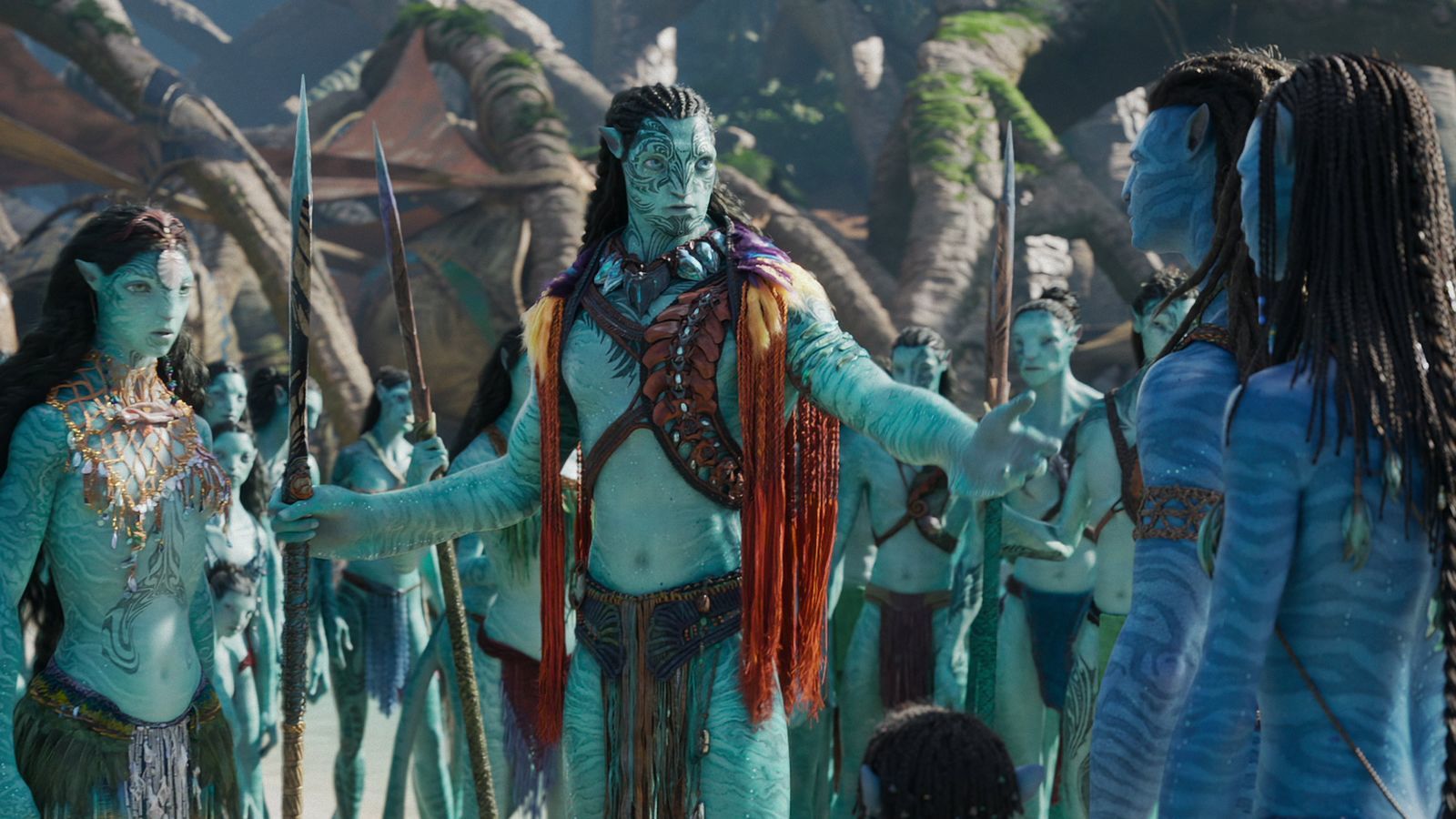 Avatar: The Way of Water is one of the most beautifully designed movies in cinema history. Avatar: The Way of Water is also one of the emptiest pieces of media in cinema history. James Cameron’s technologically developed sci-fi epic is actually quite terrible. It looks great but has little to no substance. This wouldn’t be an issue, except it pretends it does. This is the try-hard movie of the century and fails everyone it presumes to represent. Did I mention how pretty the movie is? I hope that I did because that is all this movie has going for it. There is something lost in the translation of what the movie thinks it is and what it actually is. It begs the question the first installment did, is this a visual homage to precolonial civilizations or appropriation as a means for a white person to tell indigenous stories? That’s what we’re going to unravel. Welcome to the roast of Avatar: The Way of Water. [Yes, we’re about to roast some water.]

Make no mistake, seeing this in 3D was incredible. It was like watching a giant 4K television in ‘vivid’ mode for three hours straight. The movie is smoother than the silk pajamas from the TLC “Creep” video. Shot in a few different (very high) frame rates, you’ll find it looks a hell of a lot like a video game. So yeah, the movie is for all intents and purposes a glorified and gratuitous cutscene. Cameron is a believer in the immersion that 3D visuals offer audiences, so much, in fact, that film technology had to catch up to his vision to even make this movie. What Cameron thinks he’s doing is resurrecting a format that will reinvigorate an industry that took a major hit from Covid. What’s actually happening is a very privileged director who made these studios a lot of money is making something look good in order to get money back for spending a lot of money to make it.

The meticulous attention to visual detail is spellbinding. Every fifth finger, every strand of hair, every Na’vi facial expression, all of it – is gorgeous. In the aftermath of the first Avatar, folks were left with a phenomenon called the ‘Avatar blues.’ A feeling of depression swept viewers after being immersed in the beauty of Pandora and returning to their regular lives. Such is the vision of James Cameron, for viewers to be brought into his idea of how film should be and it’s kind of a three-card Monty. For all of the things your eyes can be drawn to, the beauty of it allows you to forget the context of what you’re seeing. Vibrant blues and vivid greens of nature in sharp contrast to the grey and matte colors of the military and industrial tell a story plain as day, old as time.

Performances in Way of Water are top-notch. There’s no way around it. Doing green screen and blue screen was not easy. Motion capture with some animatronics and things that aren’t really there, not easy. Working in ‘the volume’ (filming actors in a closed space and mapping it into a digital version, like a video game) allows performances to go right from the moment into the CGI character. To be able to catch every single microexpression means the acting moves seamlessly into what audiences see. Translating that into a coherent narrative that audiences can believe in, is also not easy. Cultural competency aside, there are no bad performances in this movie, only misguided direction. Sam Worthington is the exact same from the first movie to this one as the savior Jake Sully. Zoe Saldaña returns as Neytiri and gives way more ferocity in her second turn in the role.

A good amount of the previous cast returns to play a smaller part of the larger story, and it feels like they never left Pandora. Sigourney Weaver returns as both Grace and her own messianic daughter, Kiri (who was seemingly born immaculately like Anakin Skywalker). Cliff Curtis is a brilliant presence in any role and does not disappoint as the chief of the sea people, Tonowari. Shoutout to the younger actors playing the ‘Sully’ tribe and sea people kids. They got a lot of screen time and put forth great performances. Also new to the franchise with standout roles are Brendan Dowell who plays the whale hunter Mick Scoresby and Jemaine Clement of Flight of the Concords fame as marine biologist Ian Garvin. They were absolutely the highlight of the film for me. This says a lot and brings me to some issues with some of the cast.

How is Kate “Never let go, Jack.” Winslet cast as the matriarch of the sea people? Did she fall off that door in Titanic and end up evolving into a Na’vi mer-person? This is just another of those things that took me out of the spectacle of the movie. Not that the race of an actor needs to matter completely to the role being played, but when it looks like this it doesn’t take reality into account. Mind you, we can see cell division on the fake, blue skin of the fictional characters but can’t consider why a white British woman shouldn’t play a Polynesian-based character. Not that she can’t (she did great), but why she didn’t need to. It brings to the surface that attention to some details was more important than others in Avatar. Over and over again.

Spoiler: it isn’t handled very well. What folks don’t know immediately is the impetus for James Cameron’s writing of Avatar to begin with. It becomes difficult to see this movie through any other lens after this moment.

That said, Avatar: The Way of Water presents a clumsy and hamfisted version of indigeneity. It reads very much like someone made a child’s book report about indigenous people into a movie. Add the appropriated and misused cultural elements and you can make that book report into a MadLibs. To be honest, it left me with more questions than I had when I walked into the theater regarding the production process. Questions like, “How did a white Earthling become a tribal leader on another planet?” Also, “Why does that family take the Sully name when Natiri is the next matriarch?” Lastly, “How Na’vi Jake got legit locs for hair when he had braids in the first movie and no other Na’vi has locs?” I don’t even want to get into Spider, played by Jack Champion, who looks exactly like you’d imagine Disney’s Tarzan to look in real life. I’d rather they’d taken the footage from Brenden Fraser’s George of the Jungle look over that mess.

These are the kinds of questions that make it obvious that white folks should no longer be allowed to write from the perspective of, or in regard to, the people their ancestors have oppressed. Avatar is so out of touch with the people it appropriated from that it has little to no grounding. The first movie combines so many North and South American indigenous concepts and cultures to create the ‘forest people,’ the Omatikaya. In this second outing, we are forced to witness a mashup of Pacific Island cultures for the creation of the ‘sea people’ called the Metkayina. It’s cute and pretty, like the movie itself, and ultimately empty, like the movie itself.

When the inevitable war reaches the Metkayina and they begin to rally themselves, they start to stomp and stick out their tongues. Clearly referencing the ceremonial Haka, but done with no cultural competency. Herein lies the motif of this review. So much is sampled is so little care. Not at all surprising, given how many indigenous people have been asking the public to boycott it via social media. The issues facing the indigenous are not the fault of this movie, but many of the ideas that create a negative climate for them to incubate are encouraged by the narratives of the Avatar universe. *IG Post here*

Way of Water borrows and steals from people to make a point about the fate of those same people without ever including those people’s points of view. It’s an insult, a large and expensive cultural faux pas that only exists because it can’t be held accountable. Unless it wins an award for visual effects and a hologram of Sacheen Littlefeather accepts and scolds the Academy. Then, at least, the performance of accountability is on the table.

[PS: It really disturbed me how Jake and Neytiri’s kids had these AAVE inflections to their speech without ever coming in contact with Black (sky) people in any meaningful way.]

The only thing worth seeing this movie for is seeing this movie. A weak and repetitive story that recycles every single beat from the first movie, down to the same villain (yep, Stephen Lang returns as Colonel Miles Quaritch). Often, it is said that there is nothing new under the Sun, but goodness gracious this movie is a copy of a copy and doesn’t even have the wherewithal to know it. Appropriation and privilege run rampant throughout the development of this entire franchise. And it won’t matter. It made money hand over fist and has five more sequels planned to follow.

Unless there are more indigenous and non-white people behind the camera and in the writer’s room, we can look forward to a lot more of this from the Avatar universe. I feel about this movie the way Cameron and Scorcese feel about the Marvel Cinematic Universe, except the Black Panther movies explore indigeneity and indigenous futurism with more dignity than either of them knows how to muster on film.