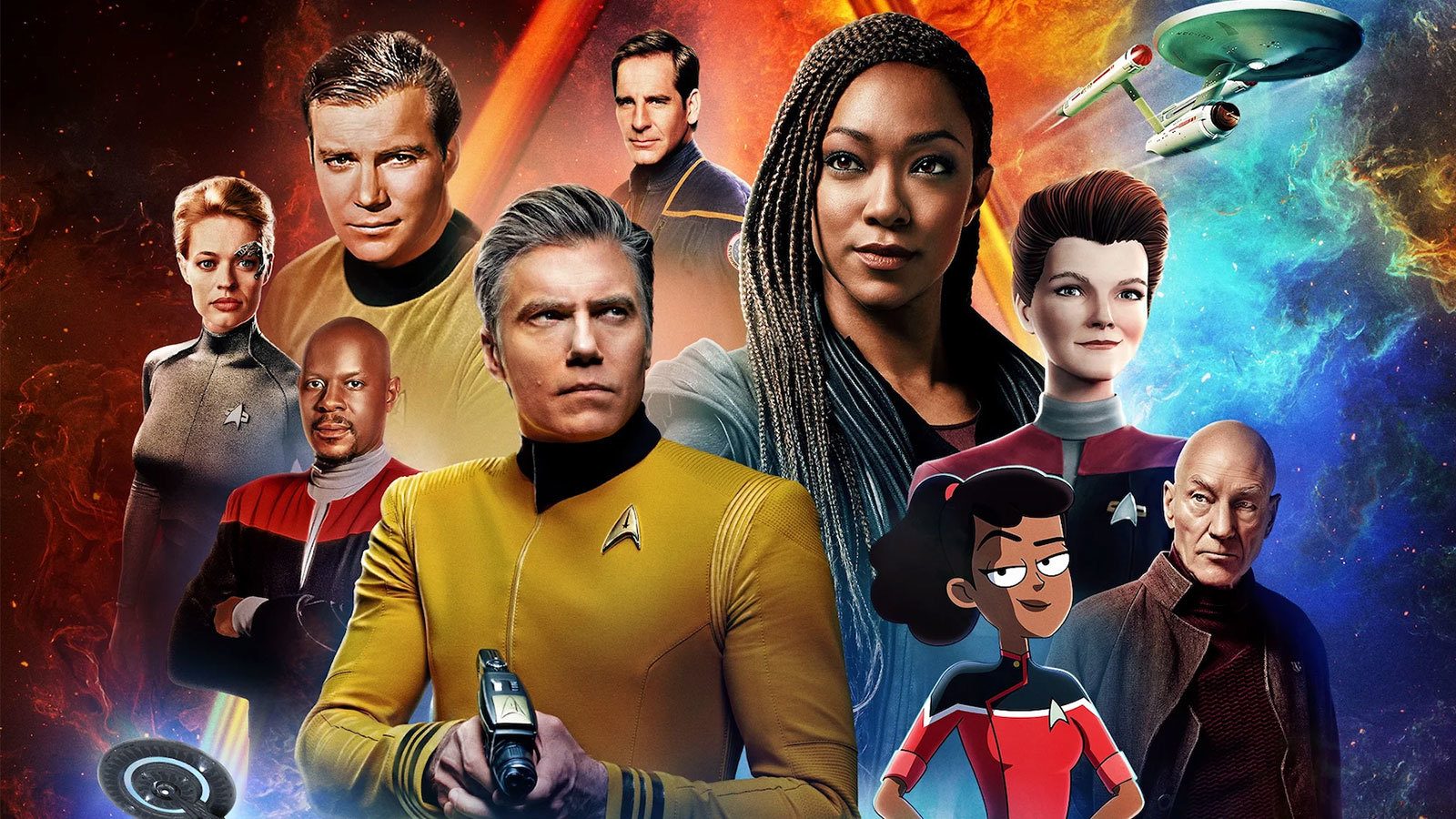 In over fifty years, Star Trek has amassed an impressive catalog of several years-long series and thirteen films as well as a plethora of supplemental material. The franchise has cemented itself as not just a mainstay on our screens but in pop culture itself. It’s massively popular, and it isn’t slowing down any time soon.

But even with all of that, I still think Star Trek can push forward and do more. Am I ungrateful for the gluttonous amount of content that we’ve received over the past few years? Maybe. But Star Trek made me this way, so it’s really their fault.

In addition, I’m here to make the case for why Star Trek should be connected through all forms of media, not just television shows and movies. I’m talking video games, comics, novels, you name it. I want it all to matter (Don’t get me wrong, it matters whether it’s canon or not, I’m just being a brat). I want it all to breathe off of each other.

The MCU Before the MCU

Star Trek has always kind of been a pioneer for connective tissue in multiple properties. They were the MCU before the MCU. In the ‘90s, The Next Generation, and Deep Space Nine aired at the same time, and then eventually Star Trek: Voyager as well. In addition to that, there were movies being released concurrently with the television shows.

While the shows and movies mostly operated on their own, they didn’t shy away from letting the audiences know that these characters all lived and operated in the same universe. They even did crossovers from time to time to remind us all of that. One of my favorites was definitely seeing Benjamin Sisko meet Jean Luc Picard and tell him how mad he was at him for his wife’s death. At the time, Picard had been controlled by the Borg and was responsible for countless lives during the battle of Wolf 359.

To say the air was thicc in that room is an understatement.

Sure, these meetups weren’t exactly Avengers-worthy, but they went a long way in convincing hungry fans that everything they were watching was part of a grand design. It made the world feel more tangible, more lived in. It really was the blueprint for all the connectivity we see in television and film today.

Taking this framework and broadening it into other forms of media wouldn’t necessarily be a cakewalk, but with so many companies doing the same thing at this point, it wouldn’t be like they’d be taking a huge chance on something in a vacuum.

Culminating with the divisive Star Trek: Enterprise, Star Trek left television from 2005 until 2017. That’s twelve years if you aren’t great at math, and an entire generation grew up with a massive void in the collective conscious of pop culture. Sure, the JJ Abrams movies began to come out in 2009, but they were aimed at being different than the television shows. They opted for action over diplomacy, which is fine, but there was a lot that fans were missing.

In 2017, we finally got a new Star Trek show in Star Trek: Discovery, which is also divisive, depending on who you talk to. It takes place about ten years before the original series and explores a period of conflict between the Federation and the Klingons, at least in its early seasons. In recent seasons, it takes place in the uncharted territory set 900 years in the future.

With its premiere, Discovery spawned four new shows: Star Trek: Picard, following the story of Jean Luc Picard in his twilight years, Star Trek: Strange New Worlds, following Captain Pike, the Captain of the Enterprise right before Kirk, the animated Star Trek: Lower Decks, which follows the less important members of the U.S.S. Cerritos, and Star Trek: Prodigy, another animated show aimed at younger audiences that follows a group of kids who discover a Federation Starship in a junkyard.

I think it’s safe to say that Star Trek has never been in a better spot than it is right now. They’ve taken that nineties blueprint and expanded upon it. We get so much Star Trek content now that there’s rarely a week in the year where there isn’t a new episode from one of the five shows. We are truly eating. And while mostly isolated, they all feel like they’re part of the same world, just at different parts of the galaxy or in different eras. But still, I want more.

We get tie-in novels and comics here and there. But how about an original series of books or comics that take place in and around these shows that feature tangential or even brand-new characters. How about stories that are acknowledged both in the books and in the shows? That’s what I want.

As popular as Star Trek is, let’s not act like it’s been smooth sailing from the jump. The original show only lasted three seasons after almost getting canceled after two. Then, as I mentioned before, after a long run of 17 years of television with multiple shows, Star Trek was axed again in its entirety. It seemed like we wouldn’t ever see it again, but it eventually came back with 2009’s Star Trek film from JJ Abrams.

But this wasn’t your daddy’s Star Trek. The Trek of old was ask questions first, punch as a last resort. This new Trek was punch first, then phaser, then maybe ask questions. The diplomacy, the thing that so many laud as their reason for clinging to this franchise took a backseat to popcorny pulp, which isn’t a bad thing. The problem was that there wasn’t a balance of both.

But that’s a deep dive for another article. We’re talking about connective tissue here, so I want to talk about how the JJ Abrams movies, which are dubbed the Kelvin Timeline, after the inciting incident on the U.S.S. Kelvin which is responsible for the deviation in events, actually connect with Trek of old, and even the new Trek that we get today. It’s actually kind of brilliant.

JJ Abrams’ Star Trek does take place in another universe, but that’s because after Romulus was destroyed in the main timeline, a Romulan miner named Nero accidentally traveled back in time, intent on making those responsible for his planet’s destruction pay for their negligence. But not realizing he’s back in time, he destroys the U.S.S. Kelvin, the ship where Captain Kirk’s father served when Kirk was born. The destruction of the ship also killed Kirk’s father. This event created an alternate timeline. Oh, did I mention the original Spock played by Leonard Nimoy was also sucked back in time? That happened too!

Doing all of this gave these new movies the space to breathe and operate on their own while also honoring the past stories’ continuity by not ignoring them completely. But wait, there’s more!

Star Trek: Picard’s first season heavily dealt with the destruction of Romulus in the Prime timeline, as Picard is seen culpable for his inability to act and save the people of the planet as their sun exploded, taking them with it. This is a small acknowledgment, but it’s a nod to the fans that they want to show us that they aren’t shying away from multiversal stuff, which is dope.

The final nod that the television shows have had to the movies was in an episode of Star Trek: Discovery Season 3, there’s mention of a man both out of time and out of phase with his original timeline, when probing the Mirror-Verse version of Captain Georgiou and how she might get sick if she doesn’t return to her time/universe. The case study they used to convince her was a man who originated in the Kelvin timeline. It’s another little nod that you’ll miss if you aren’t paying attention, but it made a sweaty fan like me froth at the mouth.

Hope on the Horizon

This article is probably going to be irrelevant in a few months, and I’m okay with that. At San Diego Comic-Con, IDW, which has been Star Trek’s sole comics publisher since 2010, announced an overhaul and relaunch of their ongoing Star Trek monthly series. It will feature a multiversal crew of Starfleet officers, some fan favorites, and some new characters, as they find and confront someone who is out to kill the Gods of the multiverse. It’s big, it’s bold, and it just might be the connective tissue that I’m talking about.

It’s clearly a multiverse story, which means it acts outside of the main continuity of Star Trek, but after everything I’ve talked about so far, it seems that as a franchise, is at the very least opening the door to the fact that their stories take place in a grand multiverse, so it kind of works if you ask me.

There’s also a new game coming out later this year: Star Trek: Resurgence. It’s a decision-based game in the vein of Telltale that aims to give us an original story with original characters. But Spock is there, and it takes place in 2380, which is around the time of the last The Next Generation movie, so there’s room for more cameos and connective tissue there as well, and I’m so excited.

But there’s one hang-up with all this. This new comic, this new game, the integrity of its level of canon is tied to its inclusion or mention in the other forms of media, like the movies or television shows. It doesn’t need to be a massive tie-in event. But drop the name of a character from one of these properties in a line of exposition. That’s enough for me.

We’ve seen what confusing canon looks like with the early MCU and their television shows. It was such a “will they won’t they” affair for years. The shows always mentioned the events of the movies, but the movies never mentioned anything from the shows. It was annoying.

I want better for Star Trek, especially since all this connectivity is already seemingly built-in. And with the advent of the multiverse in literally every major property in existence right now, it just makes sense for Star Trek to lean a bit more into that idea in the future.

All of this might come off snobby and entitled, so I just want to iterate that while I may be a canon crybaby, I understand that at the end of the day, a story is a story. There’s a lot of effort and care that goes into anything that’s manifested from your mind and realized in some type of physical form, so I don’t want my whining for more canonical avenues in Star Trek to undermine the hard work that so many have and will continue to put into stories that fit into their own little corners of the universe, not worried or concerned about connecting to some grander narrative.