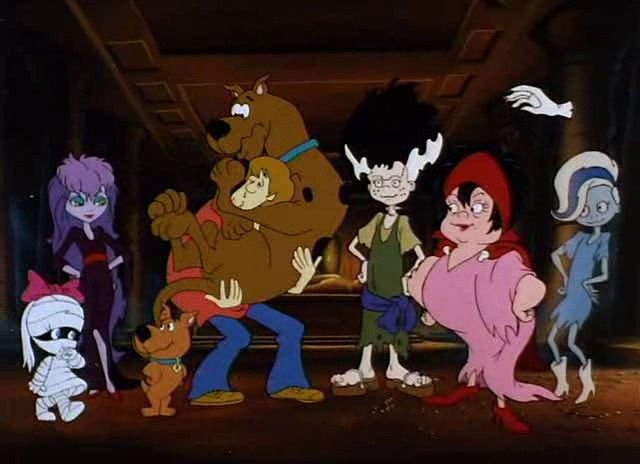 This spooky season has been surprisingly stacked with decent to honestly good media. We gotten some great movies such as Smile and Barbarian, the RE8 DLC coming out just in time for Halloween, and an all new Scooby-Doo movie with Velma finally officially coming out. And in celebration of Velma’s newfound sexual freedom, I wanted to take a look back at the Scooby-Doo franchise. Being around for literal generations, Scooby and the Gang has solved mysteries, busted ghosts and fought against the supernatural more times than I can count. And once you’ve done it all, you start to experiment.

Scooby has reinvented himself time after time to keep things fresh while staying true to itself. And sometimes it works, and sometimes it doesn’t. Looking back, I think there is an underappreciated segment of Doo history that, for the most part, gets overlooked: an era of supernatural experimentation before the 2000s renaissance beginning with Zombie Island. That’s right, we are going to take a look back at Scooby-Doo Meets the Boo Brothers, Scooby-Doo and the Ghoul School, and Scooby-Doo! And the Reluctant Werewolf. These were the holy trinity of the 80s made for television movies.

I look back on this era of Scooby-Doo fondly. So when the idea to look back on these movies came up, I was super excited to dive back in because these were great Scooby-Doo movies right? Well, yes, yes they are…but there’s some caveats. The gang is not all here, Fred, Velma, and Daphne are noticeably absent as the movies focus on Shaggy and Scooby in their adventures apart from Mystery Inc. But you know who else is there? Scrappy-Doo.

Wait. WAIT! Don’t click off. I know, I know. You hear that name and you run for the hills, but I promise you, he’s actually toned down here and is sometimes used effectively. Hard to believe I know, but it’s true. It works well, and with each movie bringing in a different supernatural element, the side characters feel fresh and unique. (Though, a few are definitely products of the time these movies came out.) And the best examples of that is in the first movie, the Boo Brothers.

Scooby-Doo Meets the Boo Brothers is probably the closest out of the three movies to the tried-and-true Scooby-Doo formula. It starts with Shaggy inheriting a house from his dead uncle, and low and behold, the place is haunted. Now, I must admit that young me did not remember this from so long ago, but it’s a southern plantation. Shaggy inherits a southern plantation from his uncle, Colonel Beauregard, who is very clearly, though not outright stated, a confederate soldier… I’m going to look at you a little sideways going forward Norville but ok. Anyways, upon arriving they are immediately accosted by some ghostly entity demanding they leave. Turns out, Colonel Beauregard not only left Shaggy the family estate, but the family fortune as well hidden somewhere on the property and an actual mystery is a foot to solve the riddles and find the family fortune. How’d your family amass their fortune on a plantation Shaggy???

It’s here where we meet are titular Boo Brothers. A trio of ghostly ghost hunters, Shaggy hires them to hunt down the ghost trying to drive them away from finding the treasure. Throw in a sheriff laying on the southern cop way to thick right down to calling Shaggy “boy” in that all too familiar way and you got yourselves a classic Scooby-Doo mystery right down to the unmasking. It really does feel like original Scooby mixed with the later supernatural addition. The Boo Brothers are that old Three Stooges archetype, but there’s a reason it stood the test of time. It’s funny and allows for some great physical comedy. And while the confederate plantation can be a little uncomfortable and they throw in a random gorilla that escaped from the zoo, (did I mention the random ass gorilla?) it’s a solid outing for the Scooby-Doo gang. But it’s the next movie most long-time fans will remember.

Ghoul School Puts a Spell on You

In this movie, Shaggy is taking a new job as a gym teacher at Miss Grimwood’s Finishing School for Girls (ghouls, get it?) The students themselves are the daughters of the universal monsters. There’s Winny, daughter of the Wolfman, Elsa Frankenteen, daughter of Frankenstein’s monster, Phantasma, daughter of a poltergeist, Tanis who’s the Mummy’s daughter, and the daughter of Dracula who you’ve certainly seen cosplay of, Sibella. The girls hope Shaggy can coach them to win a match of volleyball against the boys’ military school next door. And while at first Shaggy and Scooby are scared of the girls, they really come to care for them. He’s really sweet to the girls, and it’s a side of Shaggy we don’t get to explore very often.

We also get to see some great character design out of these monsters. The daughters are all reminiscent of their fathers but with a unique spin. The military scouts are all varied with their own personalities and fashion choices. And even the fathers are interesting versions of themselves. They are very sweet towards their daughters, but they make sure to lay down the law, telling Shaggy, “Don’t get it twisted, we still Universal Monsters.” And these monsters, invite challenge. Revolta, our villain, wants to brainwash the girls to be evil and use them to control their dads or get their powers or something? It’s not very clear and honestly not even needed. She’s what you’d expect from a by the numbers villain and is really just there to give the girls an obstacle to overcome.

Overall, it’s a great Scooby-Doo outing with one very VERY bad aspect, and that’s its ending rap. Yes, because this is the 80s it has a very horrible rap done by Scrappy of all characters. Like, so bad you may fall out your chair laughing. Ghoul School has the best and worst of the 80s Scooby-Doo era and is still worth a watch for long time fans and even newbies alike. But our last film is definitely the most experimental.

Howl at the Reluctant Moon

Scooby-Doo! And the Reluctant Werewolf shakes up the formula while pulling from other Hannah Barbara properties such as the Wacky Races. The monsters, different from the ones in Ghoul School but still those archetypes, gather at Dracula’s castle to discuss their upcoming yearly monster road race. Since Wolfman is enjoying his retirement in Florida, they decide to create a new wolf man to replace him. And guess who they decide on? Meanwhile, Shaggy is doing quite well for himself in this film and has gone full domestic. He is holding down a steady job as an expert car racer and even has a girlfriend named Googie. Once turned, the monsters convince Shaggy to race in order to be turned back to normal if he wins and of course hilarity ensues.

It takes a little while to get to the meat and potatoes of the actual race, but it’s a really fun and dynamic race they create here: an anything goes race where all the monsters have specific cars with contraptions and cheats to give themselves an edge. It’s like Mario Kart with the Universal Monsters and that always makes properties better. In fact, we need more Wacky Races in other properties. Imagine if Craig of the Creek had an episode with a Wacky Races focus. *Chef’s Kiss* This is also a Shaggy who, while still a chicken heart, is a lot more hands on and overall…WAY more confident in himself. A constant throughout all three movies is that Shag and Scoob always feel like the originals but are allowed to be a little different. Scrappy is still Scrappy, just a little toned down. And their interactions with all these varying characters allow for a better characterization of our mains. Will Shaggy win or will he be stuck as a horrible werewolf forever? You’ll just have to watch and find out yourself.

Scooby-Doo Meets the Boo Brothers, Scooby-Doo and the Ghoul School, and Scooby-Doo! And the Reluctant Werewolf are a trifecta of 80s animation that is well worth your time. Whether as a trip down nostalgia lane, introducing a younger generation, or just curiosity if you happened to miss this growing up, you can’t go wrong. And with each one being about 90 minutes in length you are definitely getting more bank for your buck. And “buck” unfortunately because these are available to rent on Amazon Prime for $2.99 (seriously Prime, what happened to you? You used to be cool) or free if you have a Boomerang subscription. So if you’re itching to add more to your Halloween watchlist, these three movies are worth a viewing.