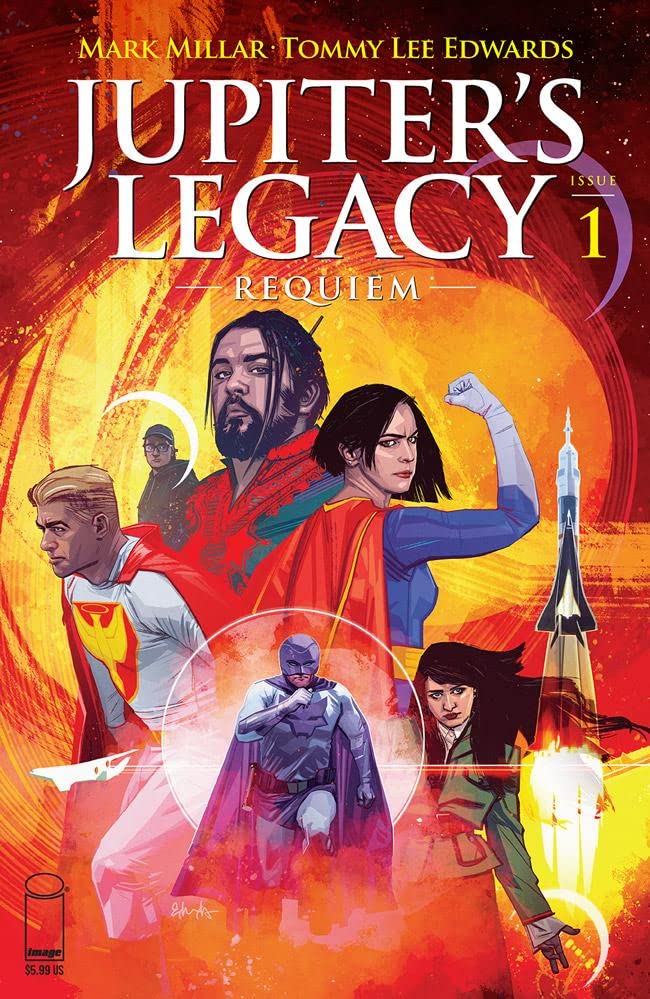 That new Mark Millar heat just dropped, and I must admit that I was a little skeptical. Whenever a new book premiere coincides with the show’s release during its Netflix run, you have to wonder if it’s a cash grab, but the show’s season 2 non-renewal proves nothing is guaranteed. All that aside, I walked away from Jupiter’s Legacy: Requiem #1 feeling very good about the start of the ending of this story.

The Future is Ripe for the Picking

I was very interested in finding out what year Millar sets the end of this grand tale in, and the decision to move this story forward to 2051 makes for some dope new possibilities of this superhero world. In one of the first panels of this book, the advancements of super society are on full display. Also on display is how easily world changing innovations can be exploited and abused by villains…or opportunistic capitalists, but I’ll save those bars for another time.

I’m sure most fans are like myself and have been wondering if the heroes and villains are still at each others’ throats, or if one side has been the more dominant “super” over the decades. As Jupiter’s Legacy: Requiem #1 progresses, details emerge that connect to the original Jupiter’s Legacy and hint at what’s to come.

One of the things I love about Mark Millar is his cavalier attitude toward a typically taboo topic or subject matter that most writers wouldn’t touch even if their pay was doubled. I commend Millar for calling out China for it’s genocidal practices against the Uyghur muslims. It was also quite jarring to see the other half of this “fictional” issue being China’s sovereignty. Wild to think about the things the Celestial Empire does and will get away with.

While nothing will top Frank Quitely’s work on Jupiter’s Legacy and Circle, I loved the change in style that Tommy Lee Edwards brings. This comic is giving off serious anime in 2D vibes, and that’s the creative content we want to see in life! I really appreciated Edwards’ ability to bring back some familiar images, like Gabriella ghost riding the electron just like Neutrino back in the day! Little things like that help to connect the new generation of characters with the old ones.

Chloe and Hutch’s offspring are ripe for a Millarworld production. Jason has grown up from his childhood superhero days to become the new Utopian. Sheldon is definitely smiling down from above like the proudest grandfather. Otto us clearly the woke one, as he left The Union for reasons. His hacking skills are top notch, he fights for the oppressed and is pissed off by Jason’s goody 2 shoes act. Sophie and her Walter-like telepathy make for an interesting character. She also stepped away from the superhero life, but she seems to be holding personal resentment towards mom dukes. Considering how Millar likes to take advantage of family members feelings, I’m going to keep my eye on this one.

Things I’m also keeping my eye on – dusty, washed up Hutch, the outcomes of that Otto proposal to a recently released and reformed Brandon, and these brand-new baddies lurking in the shadows canceling powers like Eraser Head. Lastly, we finally, and I mean FINALLY we get crazy concrete connection to the planet of Jupiter in this issue. I wonder what that device giving off Motherbox vibes is all about. Did it create our heroes and the island story was all made up? Will it be the downfall of humanity? Can’t wait for the end of the series that made me fall in love with comics again!

8 Tales from The Superhero Graveyard out of 10

Want to catch up on  Jupiter’s Legacy? Find BNP’s other reviews of the series here.