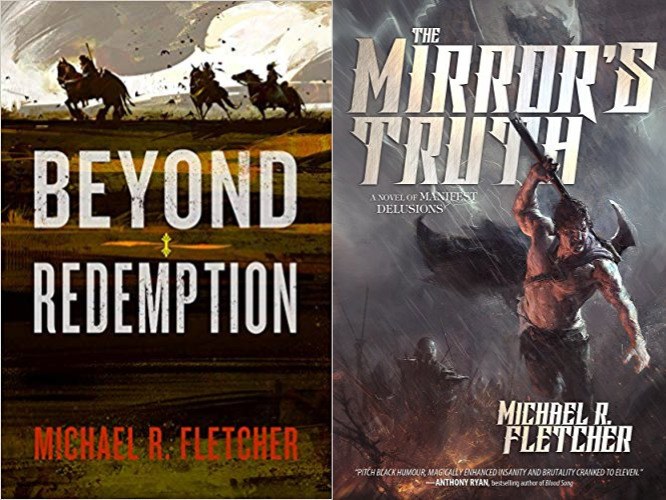 When it comes to books, I am a huge sci-fi/fantasy fan. My tastes usually run towards epic fantasy and urban fantasy, but I have been known to dip into some sword and sorcery, steampunk, even paranormal romance from time to time. But recently I have found a new subgenre to love, Grimdarks. I accidentally stumbled upon Grimdarks with The Black Company series by Glen Cook, who was Grimdark-ing before the rest of the genre even knew what hit them.

The Grimmest of the Grimdarks, and one of the most spectacularly sideways series I’ve ever read, is the Manifest Delusions series by Michael Fletcher. The series is comprised (so far) of book #1: Beyond Redemption and book #2: Mirror’s Truth. First off, these two books should really be one. I know there was no way he was going to get that large a work past the publishers unless his name was George R.R. Martin (because, let’s face it, at this point Martin can do whatever he damn well pleases). But books 1 and 2 effortlessly flow into each other (which speaks to the skill of the author), so I am going to review them as one.

There is a lot to like about this series. I’ve read about 2,000 fantasy books and one of my complaints about the genre is that after a while the themes and ideas start to blend into each other. Authors shamelessly borrow from each other and at times just blatantly rip each other off, so you end up with one good Dresden Files series and about 25 “Dresden Lite” copycats out there. So, it pleases me to say, without a shadow of a doubt, that the Manifest Delusions series is unlike anything I’ve ever read before. I haven’t read anything this original since Kameron Hurley’s Bel Dame Apocrypha.

The magic system in Manifest Delusions is as intense as it is inventive. The entire world structure is based around delusions and the power of group consensus. Your delusions then manifest as the system of magic. There are character classes (based on different delusions and real-life unstable behaviors) and variants of power levels, but the deepening descriptions of these delusions and their real-life counterparts can leave you with uncomfortable “ah-ha” moments. For example, one of my favorite characters in this series, Stephen, is a Kleptic who in this world is compelled to steal things (often small things that are seemingly worthless). The twist is this Kleptic is also a ruthless assassin (one of the ways her kleptomania manifests is her ability to steal lives). But what makes her so intriguing as a character is the off-hand, nonchalant way she kills, almost as an afterthought, almost without really thinking about it. The lives themselves become worthless to her and she steals them as she would any other trinket. Fletcher manages to pour nuance and layers into this character, so she isn’t just a mindless killing machine, but somehow, she thinks she is.

Another aspect of what makes this series so interesting is that the world isn’t a static place. The rules (such as they are) are ever changing and fluid. The physics, science, and magic systems are all reliant upon the shared beliefs of not only the magic users, but the general populace as well. The author calls this responsive reality. Fletcher says “Mass belief, if shaped by religion or politics, can cause sweeping changes in reality. Conversely, a single person, insane enough to believe the impossible with utter conviction, can also twist reality.” This keeps not only the author on his toes, but it keeps the reader on theirs as well. Established rules and physics are negotiable at best. This means that the author must have the skill to write this elegantly, otherwise it can come off as sloppy and unbelievable. I am pleased to say that Fletcher pulls it off flawlessly.

WARNING: This book isn’t for the faint of heart. This isn’t cocktails and fruit salad — this book isn’t even steak and beer. It’s more like a mean whisky that’s waiting in the shadows for someone that’s been drinking Zima all their life.

In this system, the stronger your delusions the harder they are to control, so what you end up with is many of these practitioners putting themselves under the care of a stronger delusionist (in this book they are called Geisteskranken) who may be suffering from multiple delusions. This may seem complicated, but I’ve often found that in books (as with food) skilled practitioners can make the complicated, tasty. Conversely, a complete dolt with no talent can’t complete even the easiest of tasks. You know the type, the folks that burn boiling water.

Deliciously On The Edge

This series manages to be deliciously nauseating, leaving you with a feeling somewhere between extremely uncomfortable and fearfully revolted. As I read Beyond Redemption and Mirror’s Truth, I couldn’t help but contrast it with the plethora of safe, predictable books out there prancing around in the sci-fi fantasy multiverse. Other books take no risks, safely walking down the tried and true path of “boy meets quest, boy finishes quest, boy vanquishes evil and saves the world/gem/town/princess/king”. There is a tried and true formula, a safe path that so many authors take, because it’s a recipe that has worked for others. With the ascendance of Grimdarks, it seems we are entering a space in the fantasy genre where there is room for nuance and not only shades of gray but dare I say, shadows of black; where “good and bad” are just words and the books start to follow Martin’s mantra of “actions have consequences”.

Beyond Redemption and Mirror’s Truth both fall within that category neatly. Each action is accounted for and leads you down a horrible path of broken glass and shattered hopes. But while Fletcher finds a way to “paint the room with blood” it never seems gratuitous, nothing is written for shock value. The motivations, actions and consequences, while vivid and visceral fall within the realm of believability. The McGuffin count is negligible and that’s rare for a genre built upon an altar of McGuffins and Deus Ex Machinas.

My biggest piece of advice — don’t go into this series looking for the good guy/gal/god. There are no heroes. Much like the maps of olde, these books let you know “Here be monsters”. The only thing bigger than the body count is the questionable moral compass of everyone involved. So, if you’re waiting for the paladin to show up and vanquish the “Big Bad” you’re going to be sorely disappointed. These books play in the sandboxes of lawful evil and chaotic neutral and then take a hard left into what I can best describe as orderly anarchy. Luckily, if you are a fan of original writing, interesting magic systems, and authors with the guts to try something new, Michael Fletcher has the chops to pull it off.

Read our site’s other literature reviews here. This is another entry in a newer series: #LibraryFinds. These are slightly older books you can find at your local library. Look for more books on our Bookstagram account on Instagram.