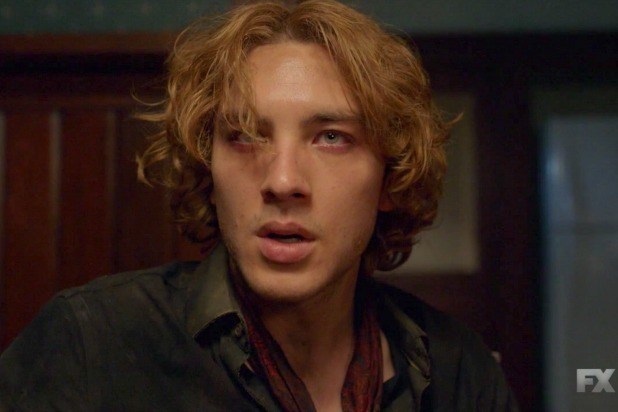 On the last episode, we ended with a barbecue of all of the people still loyal to Son of Satan, Michael. We also found out that there may be another witch coming for the Supremacy of the covens. So, at this point we are getting ready for a magical war to come (that apparently isn’t really going to go down until after the apocalypse.)

Now then, shall we proceed…(Oh! And Happy Halloween!)

A Cookout You Don’t Want An Invite To

Back at the barbecue, Michael finds the charred remains of GC Ariel, Baldwin, and his beloved mother-figure, Miriam. He screams, clearly distraught by her death. Behind him, Supreme Cordelia confronts him saying that all his allies are gone, and he has failed his father’s mission. Michael rebuts that he can just go to hell and bring her soul back, as he has several times before. However, Cordelia reveals that she has hidden Miriam’s soul with a spell that only she can break. She also tries to get Michael to join her rather than taking this path of destruction (that has literally been foretold in the Bible). He stands in her face and tell her that he will find a way to bring Miriam back, and he will then come to kill them all. 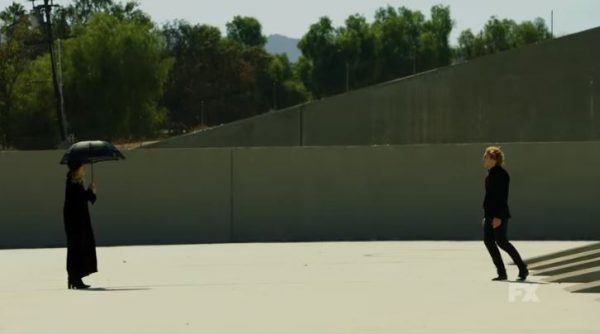 Michael is now wandering in the wilderness (Jesus copying much?) and calling out to his Father for help and answers. He picks up a rock and makes a pentagram in the dirt, telling his father he will not move until he has answered him. Four days later, he is still in the circle. He is having hallucinations, including a little boy with a grape Fanta, a girl with apples, Miriam, and a very nicely built, almost naked male angel. Finally, a goat appears. Michael stabs it and rips off its horns. Snakes slither out of the hole, but still he gets no real answers.

He finally leaves the circle and is now wandering in a city, say LA-ish area, looking downtrodden and disheveled. He sees an upside-down cross (cuz of course he does). Following the signs, he finds his way to a Church of Satan led by Priestess Hannah (Sandra Bernhard). She is talking about her sins (stealing from a nursing home and giving the money to the NRA) and ushering in the Antichrist. (Her sin is actually funny since earlier she seemed worried about global warming fast approaching, but hey, I guess even Satanist can be conservationist.)

A middle-aged woman, named Madeline, sitting next to Michael notices how broken and hungry he looks. She invites him to her home. While there, she asks about his life, while at the same time talking about how evil humanity is and how much she loves Satan and his church. Madeline tells Michael that she sold her soul to the Devil. As a reward she got a premium cable package, can shoot up heroin without consequences, and gets to fuck Brad Pitt on Wednesdays and Ryan Reynolds on Fridays. 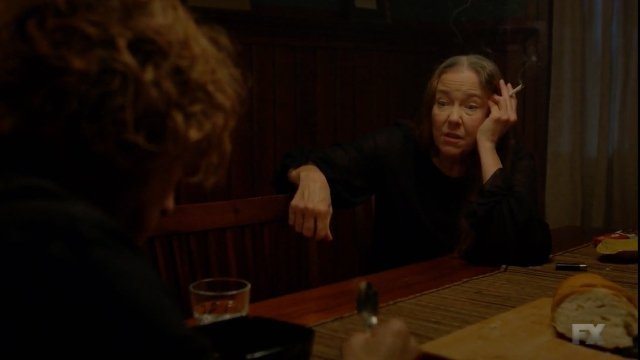 Michael takes this as a joke. He says that he is the Antichrist they have been waiting for. Madeline picks up a knife to slit his throat. Michael casually shows her his 666 birthmark, causing Madeline to retreat and fall to her knees in worship of him.

Madeline takes Michael back to the church (on a different night maybe). They walk in right as the Satanists are about to perform a Black Mass ritual. Madeline halts everyone to tell them that Michael is the Antichrist. He shows Priestess Bernhard his birthmark and is given the privilege of killing two innocents people. He slits their throats in one swipe, and the evil choir begins to sing. (I just want to pause and say that I know that the choir’s singing is supposed to be ominous, but they sounded amazing!) 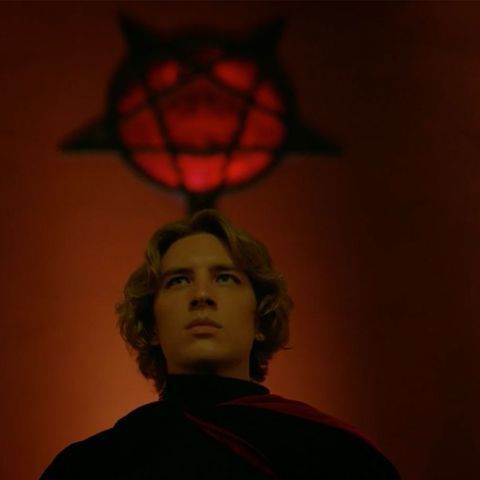 In the church fellowship room, they have a pot luck, like you do. Everyone is trying to get Michael to eat and approve of their dish. Finally, Madeline, who I guess is now Michael’s friend, makes everyone scatter, so he can eat in peace. But she is also trying to get him to try her dish. She bugs him about the next steps for them to bring about the End Times. Michael gets angry because the whole point is that he feels lost and doesn’t know what to do. All his allies are dead, and his father ain’t picking up on the main line (lol). 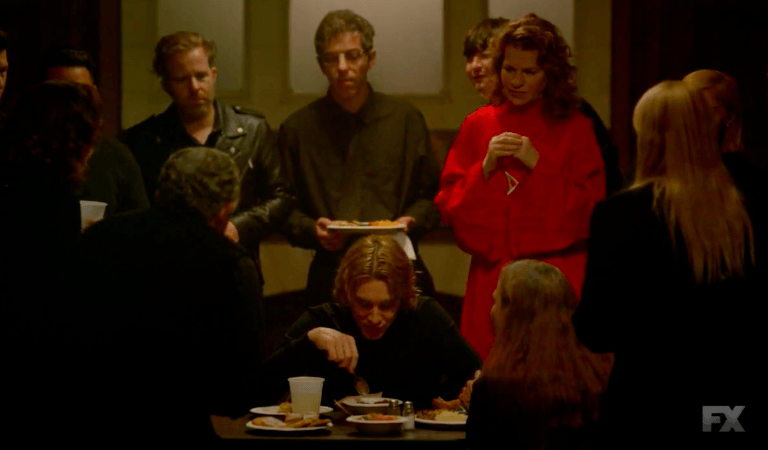 He goes on to tell Madeline that the one person who could always give him advice is dead and gone (Miriam). Madeline tells him that she knows some people who can help him get to her. So, it’s road trip time.

Madeline takes him to a Silicon Valley-looking place and drops him off. She asks only that when the end comes Michael put in a good word for her with his father. She wants to be in the worst/best part of Hell, so she can really feel the burn as she worships him.

Inside the building, we find Jeff (Evan Peter’s fourth character this season) and Mutt (Billy Eichner’s second), who look very much like a mash-up of Bill and Ted from Bill and Ted’s Excellent Adventure and Harry and Lloyd from Dumb and Dumber. The two are scientist who have sold their souls to the Devil in exchange for wealth, women, being able to snort cocaine without dying, and getting to fuck Ryan Reynolds on Thursdays. They build the most sophisticated sex robots in existence. Maybe they can help bring Miriam back for Michael, if only as a robot. 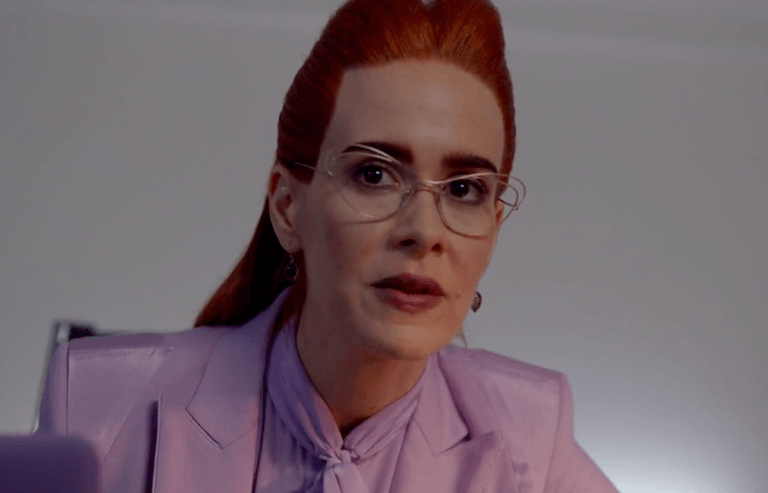 Surprisingly, their secretary is none other than Ms. Venable (Sarah Paulson). She is dressed in purple, which is interesting when we know what is to come of the color in Apocalypse. Her hair is also a more vibrant deep red. She is walking with a cane, giving us those good, hard Ms. Venable taps, and her anger is still bubbling under the surface. So, clearly she was dry way before the apocalypse came. I’m sure it can’t be easy being the secretary at a sex toy company, walking in on one of your bosses’ getting a blowjob like it’s just another day, and still no one wants you.

She tells Jeff and Mutt that they have a visitor, and they tell her to send him up the private elevator. When Michael enters the lab, they are laughing and insulting him even right down to his name. They expected the Son of Satan to be more intimidating, more jacked like the Rock when he was wrestling. They ask Michael to prove he is the Antichrist. He once again shows his birthmark, and to give them more proof, he causes the woman that was serving Mutt to burst into flames. Michael then looks at them, his true evil face flashing. Jeff and Mutt are scared shitless, fall to their knees, and begin to worship him (in a Wayne and Garth from Wayne’s World kinda way).

Michael tells them that he needs them to bring back his beloved Ms. Mead. They use Michael’s memories and photos to create an exact replica of Miriam, including giving her superhuman strength and fighting abilities. They power her on for Michael, and once she sits up, she immediately recognizes her dear Michael.

This was a filler episode from start to finish, and it was obvious with the number of commercials that aired to try and extend the time to fit into the hour-long slot. It was just to fill us in on how this character connects to this one, and how we ended up with a robo-Miriam, etc. (Next week, we will apparently find out about the beginnings of the cooperative.)

I also probably wasn’t as much of a fan of this episode because I’ve never been fascinated with Michael. It’s not because he’s the Antichrist, but because he’s boring. His best time for me this season was the interactions between him and Mr. Gallant and him and Ms. Venable. Other than that, this trip down his backstory is just a shoulder shrug for me.

Lastly, if Michael shows that birthmark again, I am going to pull a Aylmer from Nathaniel Hawthorne’s “The Birth-Mark” and cut it off!

Random thought: I know Ryan Reynolds looks good, but does everyone really have to want him to be the guy they get to fuck as part of their deal with the Devil?

Well, I hope next week is better. ‘Til then, I hope your Halloween was safe.

Keeping up with American Horror Story: Apocalypse? Check out BNP’s other reviews here.