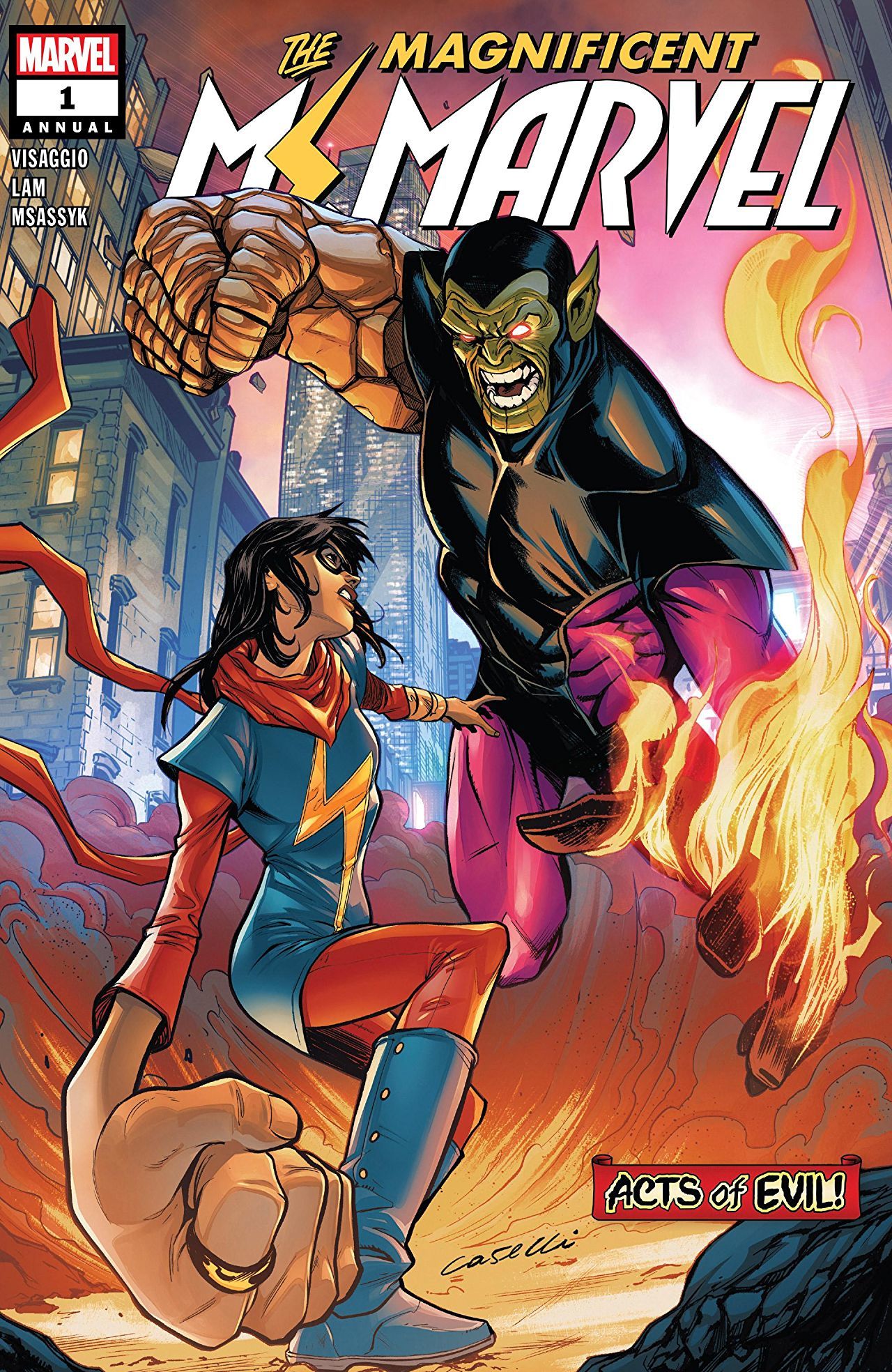 This week brings us the first annual issue of the The Magnificent Ms. Marvel. This one shot comes from a team I’m unfamiliar with — Magdalene Visaggio (best known for Kim & Kim and Vagrant Queen) and Jon Lam (Adventure Time comics).

In Annual #1, Kamala takes on a classic Fantastic Four villain, Super Skrull. Armed with the combined powers of Marvel’s First Family, Super Skrull might be the strongest villain she’s ever fought. This isn’t a simple brawl, though. The Kree equivalent of a used car salesman offers Super Skrull the chance to turn the Earth into the new Skrull home world by turning the humans into Skrulls. All he needs is a being with great “metamorphic energy” to sacrifice to power the device. His plan is to masquerade as a hero to win the hearts and minds of Jersey City, placating them into becoming good Skrulls. Kamala comes across his superhero alter ego, Captain Hero. She initially welcomes the addition of a powerful hero to Jersey City but becomes increasingly uneasy about his brutality. Just as unnerving is the city’s positive reaction to his beating villains half to death.

Ms. Marvel reaches her breaking point when Captain Hero violently intervenes during her confrontation with an interestingly dressed energy manipulator, Shabang. Ms. Marvel decides to punch Captain Hero in the face and he decides to reveal himself and attack her. Ms. Marvel’s compassion pays off as Shabang saves her and helps thwart Super Skrull’s plan. Super Skrull retreats, moved (kinda) by Kamala’s compassion towards his people’s plight of having no home world. 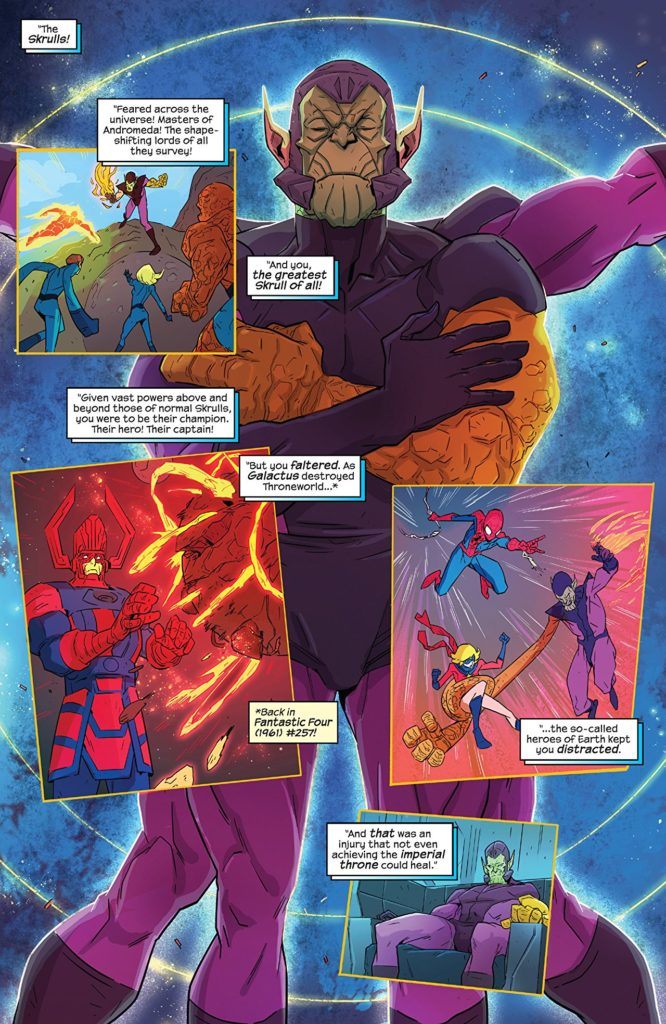 This book ranges from delightfully absurd to socially relevant. The idea of turning Jersey City’s population into Skrulls by sacrificing Kamala but not before pretending to be a hero is over the top. It was a fun choice to make Captain Hero a character voiced with Stan Lee’s corniest dialog. He sounded like he was plucked right out of a Silver Age Fantastic Four Comic. There was a disconnect, though, between the levity of his speech and the choice to make him an overtly violent hero. I would have preferred they leaned into the latter. It made for a succinct way to showcase Kamala’s compassion and restraint, which was the main thrust of the story. There are obvious parallels between the public’s positive reaction to the mistreatment of criminals and our public’s disregard for the rights of the accused and the incarcerated. 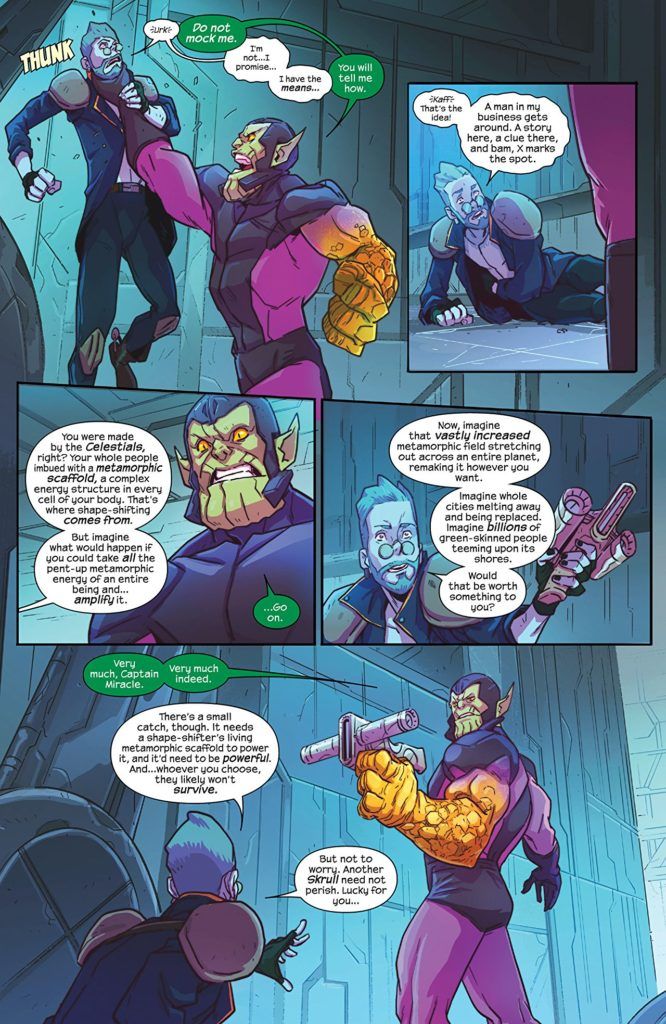 Lastly, it wasn’t lost on me that Lam gave this book an anime feel. An otaku at heart, I’m always ok with my American comics feeling like manga.