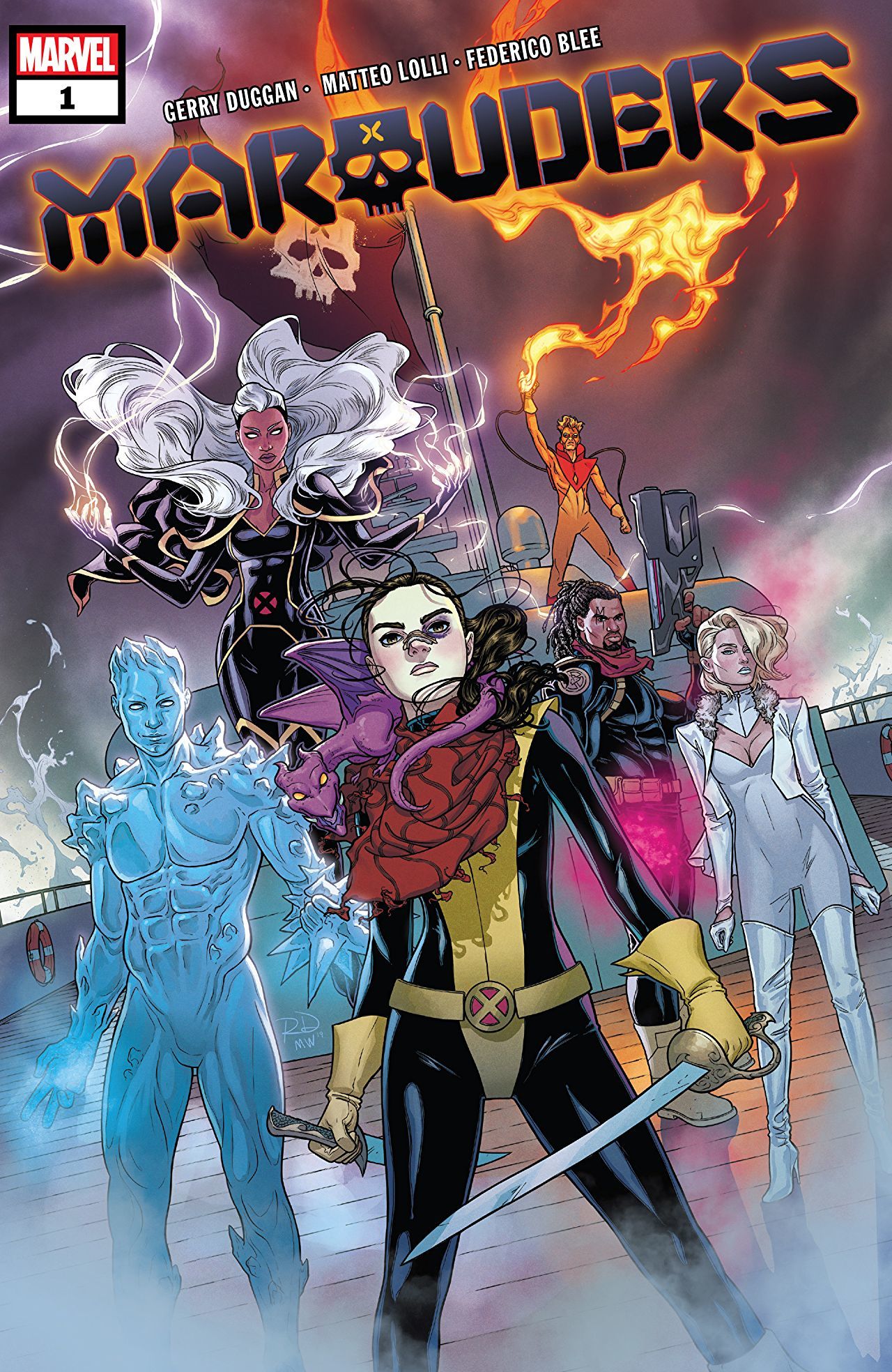 Marauders #1 comes to us in this month of #1s after House of X/Powers of X. All of these issues will be establishing different perspectives on the new X-Men era. First was the lead title, X-Men #1, which sets a tone of seriousness — nation building and family supporting. Second, we have Marauders #1, which…is not that. Written by Gerry Duggan, with Matteo Lolli and Federico Blee on art, this comic brings a welcome humor to the Dawn of X.

I’ll be totally honest with you, if you put Ororo Munroe on the cover of a comic, I will *at least* pick it up and flip the pages. This is a weakness Marvel has used against me in the past, but I still fall for it. Not only is Storm on the cover, so is Emma Frost. After Emma’s turn as 100% that bitch in House of X, I’m a fan, so I’d pre-ordered this comic before I realized that Kitty, I mean KATE, Pryde was actually the leader of the squad. Joining Pryde are Bobby “Iceman” Drake, St. John “Pyro” Allerdyce, and eventually Lucas “Bishop” Bishop (who really got robbed on the code name front).

The squad’s job is two-fold. First, they are to smuggle the life-saving drugs of mutantdom into countries that have refused a formal diplomatic relationship with Krakoa. Second, they are to smuggle mutants out of those self-same countries. Nice set up, all of which is covered in some terribly wordy pages early in the issue. What’s also covered in those early pages is the underlying issue: Pryde can’t enter Krakoa. 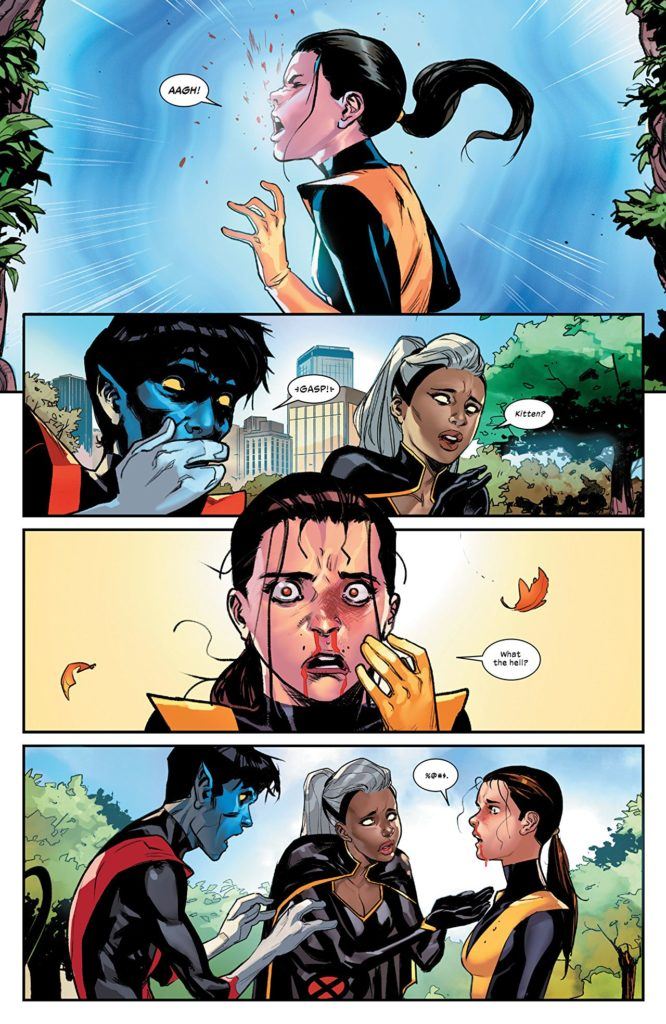 The dramatic irony of Pryde rescuing other mutants and delivering them to the promised land while being unable to enter it herself runs strongly through the comic. It is the kind of irony that will have to be resolved, either explained or excused, in the first arc or two or it will risk getting tired quickly. However, for the opening bit, it works well. What is also deeply ironic, on an almost Greek tragedy level, is the fact that we as readers know the fears of Moira X from Powers of X #6 — we know they fail, even as they think they’ve finally found paradise. The tension between the brightness of their perceived future contrasted against all their previous failures are a dark cloud behind the one-liners, lending a bittersweetness to the comic.

Kate doesn’t have much choice in being at sea. Ororo is enough of a boss to not speak to Emma, but also can’t help but rescue mutants. She’ll be the adult on the boat, almost certainly. Especially as Iceman and Pyro are clearly in it for the kicks. Pyro, in particular, is portrayed as keeping with his Brotherhood of Evil Mutants roots, and being an agent of chaos. He gets along well with everyone else, but how well he follows directions is yet to be seen. Bishop doesn’t join up with the crew yet. There are a couple of pages of him undercover in Taiwan. I’m going to shelve the idea of a 6 ft, 6 in Black man with an M tattoo on his face undercover in Taiwan, but believe me, I’ll come back for that next issue. Overall, everyone’s motivations are surfed across so the book can get to the punching, which I generally approve of. I do hope that Duggan gives us a few deeper dives into each character, exploring why they choose to face conflict on the high seas instead of just chilling on the island drinking with Wolverine.

The combat sequence is the best part of the issue, both in pacing and in art. It is basically 6 pages of Pryde combining martial arts skills with her ability to phase through solid matter. She utterly and efficiently lays out a group of Russian guards while keeping to the mutant law: Kill no Humans. It is the kind of display we’re used to from other, mostly male, mutants, so it is fun to see Pryde strut her stuff. 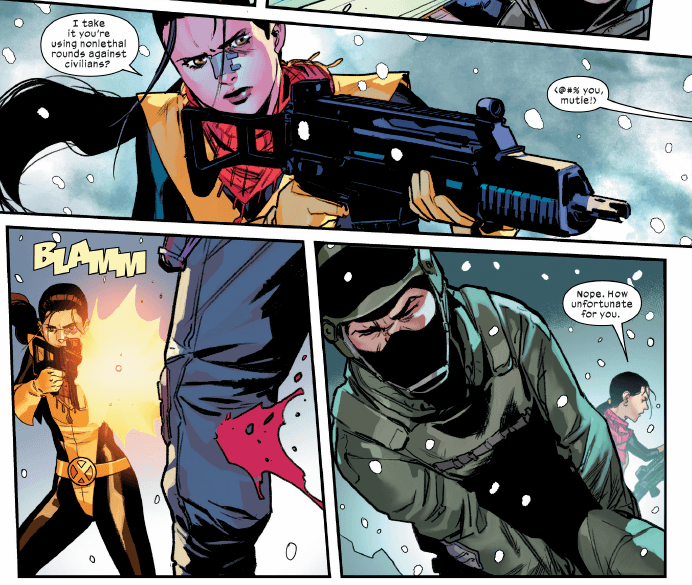 All together, for a #1, Marauders establishes its premise well, even as it is working on some of the characterizations. The art isn’t spectacular, but it is up to the task. We also get a few of the graphic info pages, the fine print of which continues to earn Tom Muller a nomination for an award in my book. I’m not disappointed in picking this one up and look forward to where the mutant pirates of Krakoa set sail next.

Reading Maraders? Find BNP’s other reviews of the series here.