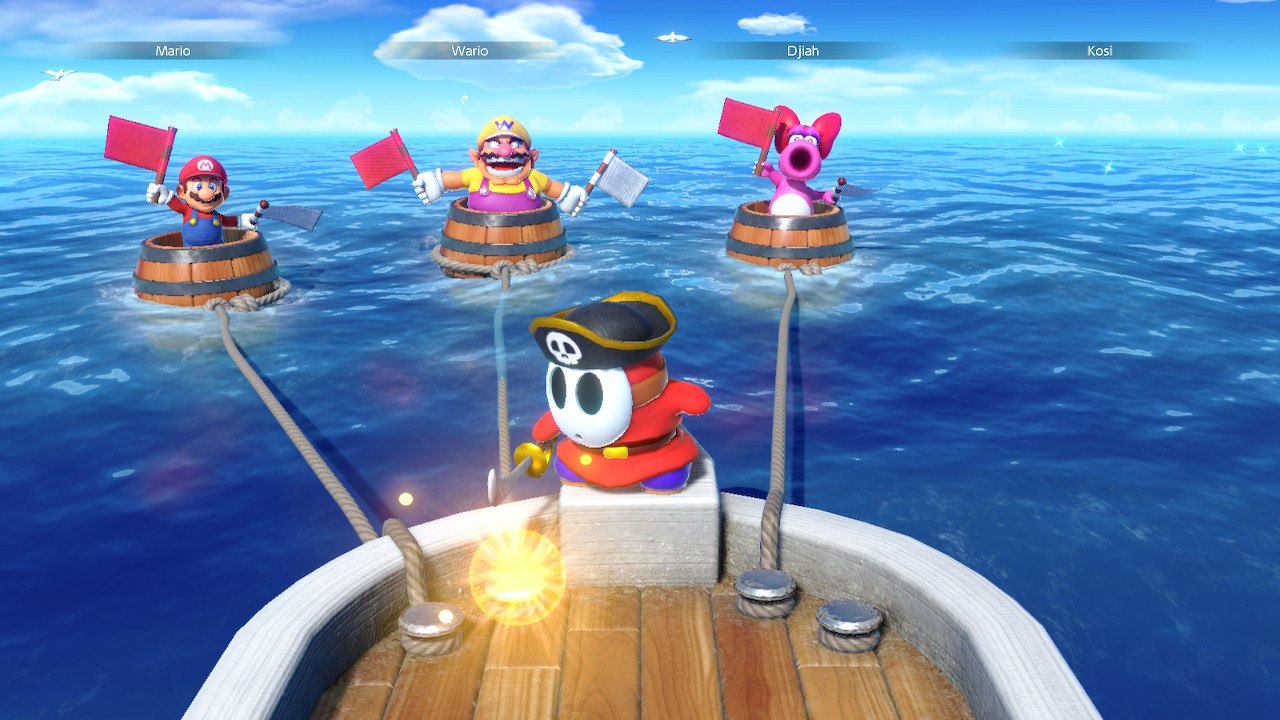 When my partner comes to visit me, we like to engage in Mario Party violence: Good ol’ Birdo vs Donkey Kong action. We talk shit, then pick up the joy-cons and throw hands. But one weekend I stopped and observed that the mini-games are the homies being—tortured? Hold it with me for a second. Mario and his homies are being put in some inhumane situations (even for the sake of their world). In Mario Party, they got capitalistic ghosts, mushrooms that watch you get robbed, and “minigames” that include things that could kill you. Mario Party is not fun and games. It has never been fun and games. We’re playing into violent affairs, and we’re complicit in our remotes.

Let me start off with some of these “minigames.” These ain’t games okay. They’re forcing people (and animals) to do extravagant, possibly life-altering tasks for 10 dollars.

Let’s start off with this Pogo-a-Gogo. A game where three characters on a pogo stick fight to stay on a space station as a rival rotates the platform so that you may plummet into intergalactic doom. Okay. So, we see the problem, right? Toad, the host is basically telling you, “For ten bucks, make your homie disintegrate into the milky way.” My questions are: How they even got the pogo sticks up there in the first place? Why aren’t they floating away? And why did they have to choose something so life threatening in the first place?

According to Business Insider: “You could only last 15 seconds without a spacesuit — you’d die of asphyxiation or you’ll freeze.”

And how long is this game you ask?

They all should’ve died four times.

I don’t know what kind of funding Toad got, but someone needs to investigate his budget for weapons of mass destruction.  Because there is no reason why you got UNLIMITED Bowser head bombs. Look at them covering their heads as their best friend gets caught in the explosion. Tragic.

The last mini game I’m gonna focus on is Hot Rope Jump. It’s jump rope, but the rope is made out of flames. I want you to think about it. Imagine you’re playing double dutch back in the day and one of your homegirls say: “What if we lit this shit on fire?” Everyone was like, “Haha good one Shirley.” But then she insisted, “Nah, we’d look dope!” Everyone disagreed, but she did it anyway. That’s Mario Party Hot Rope Jump in a nutshell. You’re literally jumping to save the hairs on your butt from being singed.  And what happens to you if you get caught? Literal smoke is flaming out your anus, and you’re hopping to safety.

1) Cheep Cheep Chase: Four people get thrown into a dungeon pool being forced to swim for their lives avoiding spike balls floating on the water while a huge fish blubs after you to suck off your flesh and bones.

2) Boulder Ball: Three characters run up a steep incline as someone at the top of the hill throws down boulder balls at them.

Next, lets gravitate our attention to the party boards. Here they present you separate “paradises” and “invigorating experiences” to choose from. Ranging from a tropical island to a haunted forest, each is equipped with their own methods of follicle stressors. My main focus is going to be on Space Land. Modeled after a space colony, this board has multiple paths with a counter in the middle to set off a huge laser beam that not only blasts you into the air, but also yeets your entire bank account.

I bet you’re asking, what makes this more of a torture chamber than say Peach’s Birthday Cake where you can grow large piranha plants between the crevices of sweet frosting. Or why not Woody Woods where moles pop out of the ground and mess with the map, so you’re forced to go around in circles in a God forsaken place where mushrooms play soccer with acorns. You’re probably wondering why not Yoshi Island? A paradise where Bowser robs you of 20 bucks then throws a shell at your face disguised as a cake. No, I assure you Space Land is a menace, and here’s why.

Everywhere else, it makes sense. Yoshi island? You could make an excuse for dead Yoshis. Haunted forest? Of course! You know what Space Land has? Ghosts AND cops! You make a space utopia, and you got homies in hoods and masks stop and frisking you at checkpoints. Sounds familiar, but I digress. Imagine in space and away from earth, you got homies chasing you in cop cars, a countdown waiting to strip you of your entire bank account, and on top of that when you least expect it, some broke dinosaur on the other side of the board plotting to steal your stars. You literally cannot escape the treachery.

My personal experience with Space Land begins with a classic game my partner (Donkey Kong) and me (Birdo, the bougie dinosaur). I knew this game was gonna be something when a huge cinderblock with arms chased me all the way to the other side of the board, which plopped me head first into the laser. What happened next? My partner circled around the counter and had all of my money (100 coins by the way) disappear. To give you retrospect, having 100 coins or more is basically like being the 1%, so imagine that to losing all your money and being broke. It be feeling like everyone laughing at you. Like, “Ah ha! Wasn’t you out here making it rain on Toadette? Now look at you, scraping for three dollars every five steps.” It’s quite embarrassing actually. And the fact that you can’t even pay off the “space cops” (Shy Guys) if you don’t got money. They just ignore you saying, “we got paper work.”

This Whole Board is Disrespectful!

After I got chased to the back of the board and was left with no money, everything was wild. I passed by the bank; they pitied my ass. “We’ll take whatever you have.” I’m sure Koopa is just looking at me and internally saying, “Oh. Brokey McBroke Broke is back. Somebody, get her a dollar.”  I landed on the V.S. but didn’t have enough money for the betting pool. Toad started making side remarks about how there’s less money in the pot. Like obviously! You knew what was going on when I got here! Stop embarrassing me in front of the crew. I could sauté him for talking wild like that, but I’m not saying nothing.

But by far, what makes the Mario Party torture chamber worse are the item stores. If someone throwing boulders at you and a ghost coming to rob you isn’t enough, those mini shops set up throughout each board ran by Toad will do it. Toad the mastermind of all things PAIN has diabolical items ranging from things that can make you move faster, or reduce your opponents speed, steal things from them, etc. If you want to hurt someone ,Toad has it. But for the purpose of my own trauma, I’m gonna focus on one:

The Chomp Call summons three metal balls with TEETH to move Toadette to another star location. This item is inhumane. Not only does it revoke an opponent’s chance to get a star no matter how close they are, but it also puts Toadette at risk. Imagine you just see three wrecking balls with good dental coverage circling around you like sharks. I’d be terrified. This is Toadette’s life. The Chomp Call is probably one of the pettiest items in the game, because the computer specifically waits till you get really close to set it off. Right when you have your hopes and dreams, waited four turns to finally afford a star, then BAM! Somebody whips out their inhumane wrecking ball whistle to redirect the star somewhere else on the board. The places where Toadette falls, can lead the star directly to you or 50 steps away.

There’s been plenty of occasions by luck I roll high numbers and think I’m going to hit the star but like frustrating magic, I fall one step before it. I cry. I scream. Then, I see another player has a Chomp Call. They see my joy, pull it out and FWEEEEET! My hopes, my dreams dashed as I am forcibly taken back to the same side of the board I just came from and will take me another five turns to return to the star’s location.

I know we grew up thinking for generations that Mario Party is innocent fun and filled with activities for all ages. But I’m here to tell you that it is absolutely not. Folks get mad at violent shooter games; Mario Party needs that same energy. If you got your friends conspiring against you from 30 steps away, taking your money, making you succumb to money grubbing lasers and throwing boulders at you?! I think you have to rearrange your priorities.