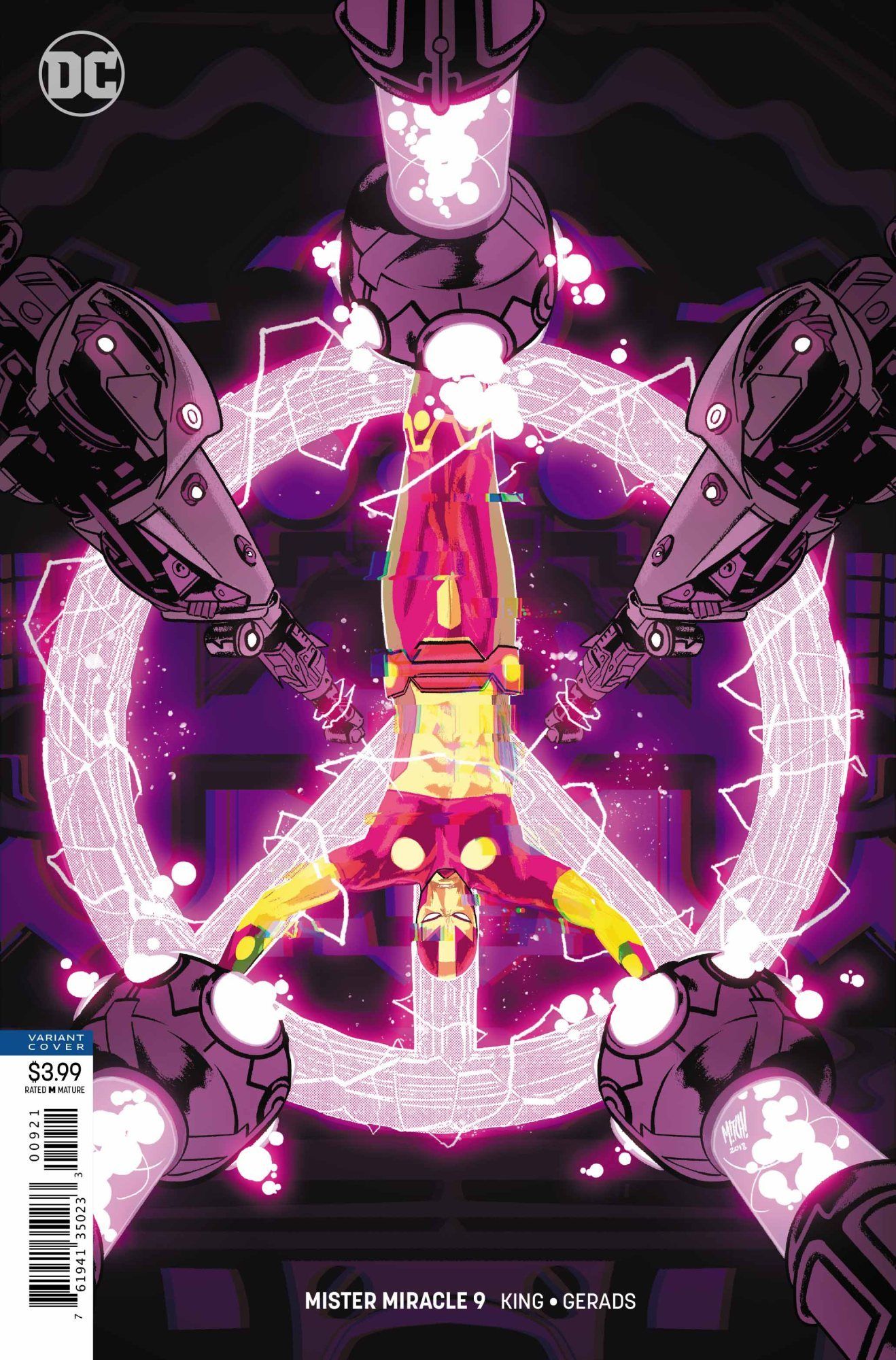 “I bring my offering, I will not preach
Awaken my demons, you can hear that man screaming”- Pusha T 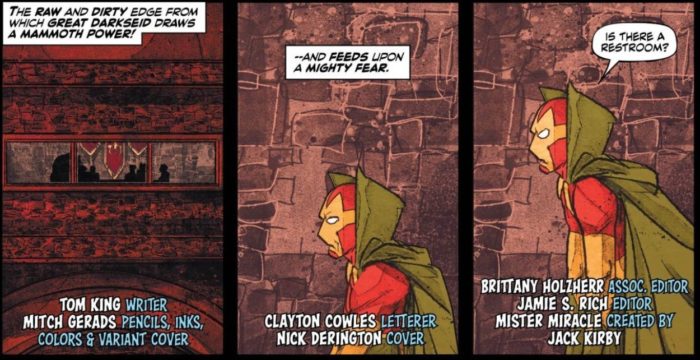 You cannot say that this mini-series isn’t going on the list of top 5 comic book runs canceled (dead) or ongoing (alive). King and Gerads continue to redefine, revamp, and refresh Jack Kirby’s 4th World vision; and my god. This is by far the best iteration of the war between New Genesis and Apokolips that we’ve ever come across. I said it. I will die on that hill. We get a bottle episode as Scott Free, Big Barda, and Light Ray negotiate with Kalibak and his court over the terms of peace.

You gotta give King credit, man. He knows how to make something so simple as a negotiation have such a large overtone. We’ve seen the battlefield of Apokolips, but the sight of seeing servants chained and acting as the legs of the table? Or big-ass Kalibak taking out his reading glasses to go over the agreement terms of peace? It’s this attention to detail provided by Gerads that make the panels stand out and stay with the reader. 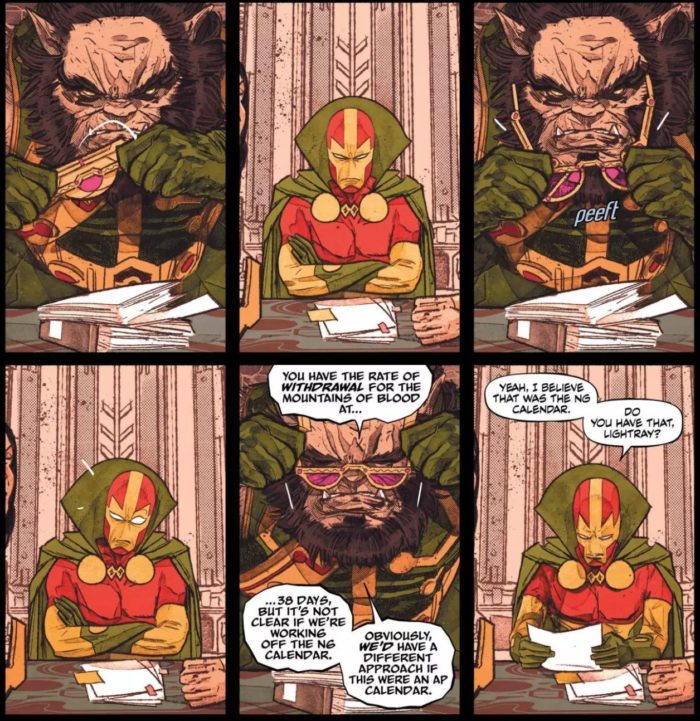 If you know Kirby’s characters then you know Kalibak is the runt of Darkseid’s litter. I’m wondering if dude is a middle child. No matter what he does, Darkseid could not give a fuck about this kid. King is able to give him a bit of the Kite-Man treatment this issue. We don’t see Kalibak flat-out as brutal as he usually is… at first. Kalibak doing negotiations with Scott is the type of character depth and development that makes this iteration stand out from his previous incarnation. The interaction between Kalibak and Scott is unique for this issue. When things get tense (and they do get intense)… that’s when the meat of the issue comes through.

I’m fucking with this issue so heavy due to the side of Scott Free that comes out during negotiations. Your boy is learning to keep composure and drop fucking bars in the midst of these Apokolips generals wylin’. However, just when you think you know what’s happening, there’s always a twist in the mythos that King introduces that turns the tide to our understanding of characters. Even if the characters aren’t around anymore, the myth-building and backstory of relationships between characters that gets filled in every so often reinvigorates this age-old war tale between planets.

This isn’t a comic series anymore, this shit poetry

Listen, there a scene I loved toward the end of the book at the beginning. My god the bars in the beginning. There are so many quoteables. “If you’re pissing with the son of god, you should have something to say.” “It’s just what is, and what’s better than what is?” King delivers these hard-ass bars and tales while Gerads displays just how oppressed and abused the citizens of Apokolips are.

King and Gerads continue to be on some other shit with this Mister Miracle run. Not only is the story thrilling, but the psychological aspects behind the characters and motives keep the reader uneasy. Even with its hard-ass scenes and bars, there’s still moments of humor able to fit in at just the right moment. Mister Miracle aka Mr. Escape The Room is standing on these shelves daring someone to take the crown.

10 servants plastered to the wall out of 10 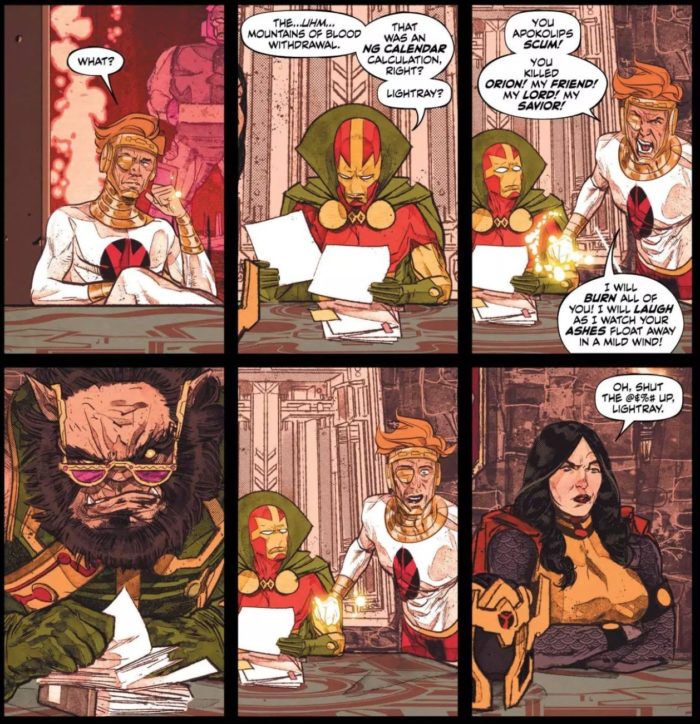