Off the rip, you know it’s about to be an intense episode because all the young bucks wind up walking together (nice Beatles album shout out), meeting up with lesser known heroes and all the 3rd years before walking into the spot that is giving them all anxiety. But that look on Midoriya’s face when he saw damn near every hero under the sun in the room! Gran Torino, Aizawa Sensei, Ryukyu, Gum Fat, Mr. Brave and so many others. 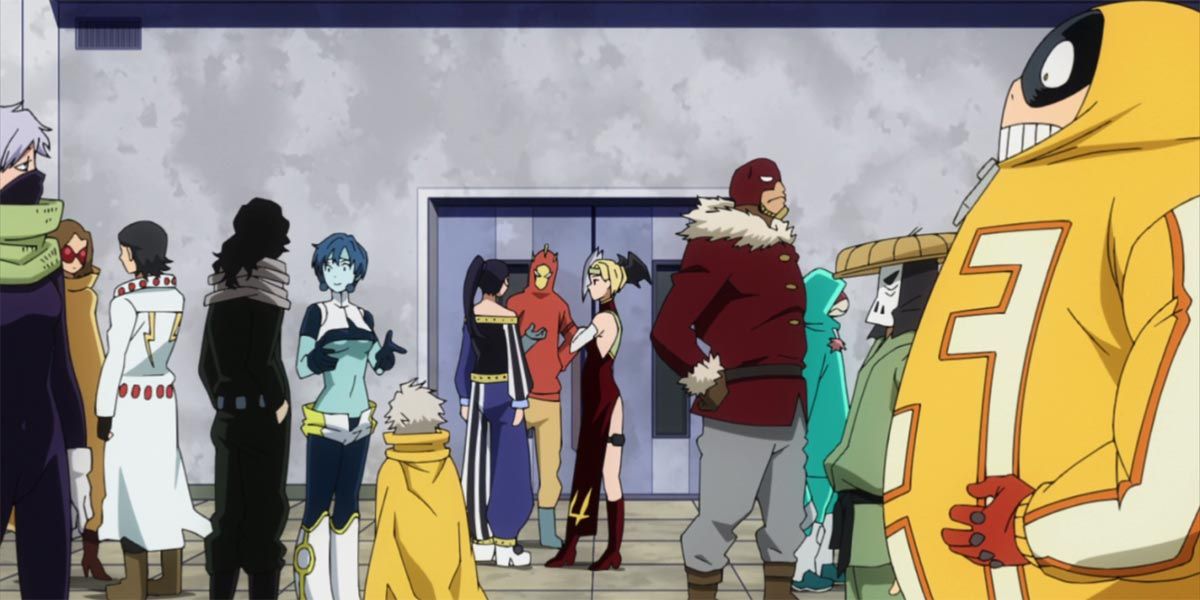 But we out here with the chart toppers and local legends alike, so this is no time be on his fan boy flow. All Might’s successor, Kirishima, Mirio, Nejire, Tamaki all have first-hand experience in the static that has arisen over the last couple of weeks. So, it’s time to cut the work study kid shit and see how the grown folk play Spades. Uraraka and Asui begin to comprehend the weight of this meeting of legends when the Dragoon hero reminds them that they’re officially a part of their forces and will “play an active role in that matter”. They check back in just in time for the cerebral assassin, Sir Nighteye starts talkin his Intel gathering shit.

The Nighteye agency started tailing those scrub ass Reservoir Dog thief villains and came up with the following information about the Shie Hassaikai criminal organization, and what they’ve been planning:

Side Bar: I love how genuinely surprised and impressed Mirio and Kirishima are that Midoriya knows Gran Torino.

2nd Side Bar: I love that the only Black hero in the room, Takagi Ken aka Rock Lock, is the only one not tryna have it with kid’s being in this debrief. He’s a whole Octavia Spencer “Fuck them kids” mood.

Then comes the moment we were all waiting for. Nighteye mentions Eri, and the fact that they suspect Chisaki is utilizing his daughter’s body to manufacture quirk destroying/neutralizing bullets, like the one that took Beast Boy Tamaki out of commission when Kirishima aka Red Riot made his big debut.

But that wasn’t the moment I’d personally been waiting for, it was the mention of Midoriya and Mirio having the girl in his possession, letting her go and the hero backlash that came of that revelation. Our resident Boondock, Rock Lock throws even more midnight levels of shade and the subdued rage that ensued within our 2 stunning young heroes was inspiring. Luckily, Nighteye came to their defense, but that didn’t stop them from letting everybody know they ready for all the smoke and will be getting Eri back next time!! In unison no less!!! That scene got me so hype for these two in the future.

Nighteye lets the team know they must investigate further and be patient as they will only have one time to strike. He won’t be using his Foresight until he’s sure it will result in the highest possibility of success. He can only flex the vision once every 24 hours, and it isn’t a 100% prediction of everything that will happen in the future. They relent, despite their saltiness.

Now, I may be a little sick, but the final scene of this episode would’ve brought a tear to my eye either way. Seeing Erasurehead pull up on the young bucks and hit them with the “What is this a wake?” line was so on point.

The flashback to him speaking to Deku about gaining his trust and doing things the right way, then calling him his problem child was so dope. Then, on the older teen side of things, the Big 3 for like Voltron and remind Mirio that nothing will change by being a sad sack. Mirio and Midoriya coming to terms with what they had to do gave me chills, and the only thing that could’ve made it better was Sir Nighteye realizing how similar All Might and his successor are, vindicating his old buddy and hopefully mending their relationship in the end.

Like watching My Hero Academia? Check out BNP’s other reviews of the series here.