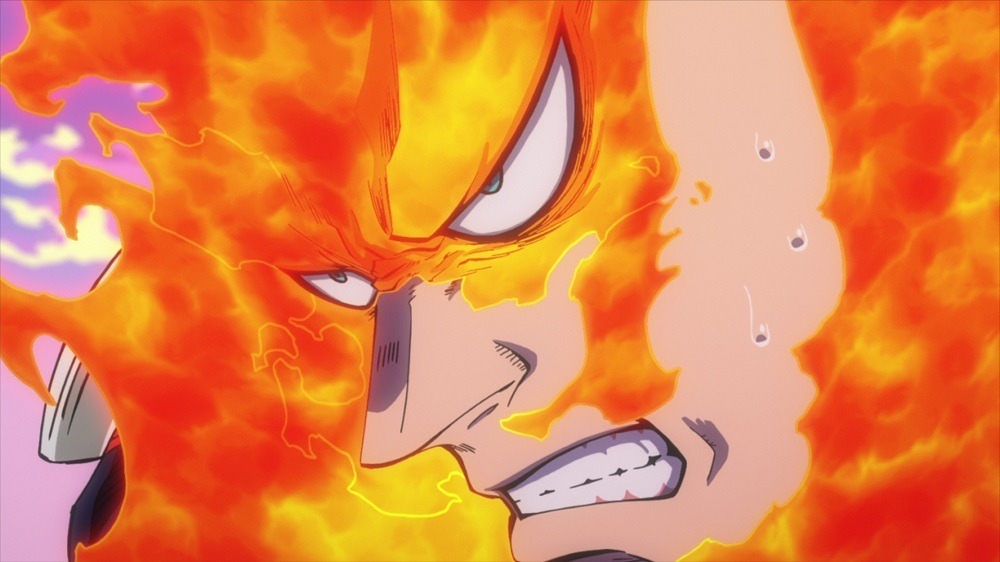 There’s a cold start up in the hospital where we see some siblings visiting their mom. Ma dukes reveals that Shoto been sending letters, and now we know exactly who these folks be. Todoroki’s fam is visiting with each other when big brother is like, “so you know they named that muthafucka the #1 hero, right?” Woof, my dude really made his whole fam hate him. He’s like, he’s number one, but the world needs to know how terrible he is. But moms is like, peep it, he trying, aiight. These flowers didn’t come from nowhere. He’s trying to reconcile his past. 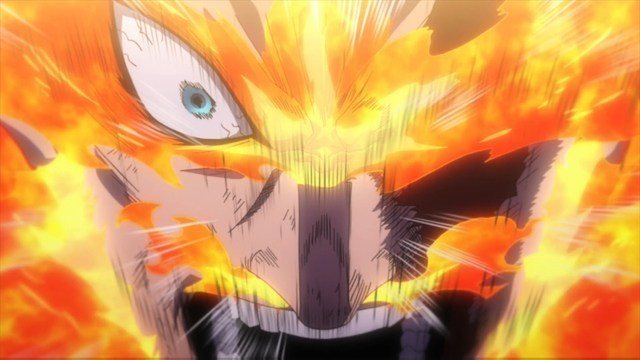 …but right now, in real time, he’s getting his ass beat. He blasted the shit out of this Nomu beast, but this bastard just regenerating. And it can talk. That’s different. Endeavor start busting out all the moves, but now Nomu is really taking it to him, knocking him through buildings and shit. Collateral damage looking like a Marvel film. Now, Hawks is on crowd control. And let me tell you, you can see IMMEDIATELY why this dude number 2 in the world. Supple Feathers all up in the hero game! He sending out feathers to rescue folks from the building. Meanwhile Endeavor giving this Nomu bastard all he got and all he got to show for it are a lot of chopped and screwed skyscrapers.

Not only is the Nomu still regenerating, but he splitting off smaller white Nomu’s to terrorize the city. Which means the folks that were backing up Endeavor now gotta handle these muthafuckas. ALL. BAD. Hawks ain’t really a power fighter like that, but he can distract the white ones long enough to get folks to safety. And Endeavor, shit is all bad. He starting to overheat, and Nomu back to full strength already. AND he got an army below.

But now we see the reason why he was trying to crossbreed Shoto. Endeavor overheating. Dude knows his limits. But Shoto, third born, first of his name got that icy-hot for balance.

Endeavor says fuck it and unleashes prominent burn. And that shit almost looks like it works. But Nomu split off his own head, sidestepped that shit and impaled Endeavor like a damn a kebab. AND DOWN GOES ENDEAVOR. Nomu looks like he done took dude’s liver and his eye. Shoto is fucking shook. Whole damn city is shook. This dude was named #1 like an hour ago! And he got bodied already. But Endeavor ain’t done yet. He rises up on Nomu again…but Nomu puts him right back down.

Meanwhile, Endeavor’s kids watching this shit live on the laptop like, my dude, you ain’t All Might, keep your ass down. But also, one thing they know about pops is that dude never, ever gives up. Nomu is like, well, aiight, guess I’m done here and about to start terrorizing people. But this dude in the crowd looking like Fairy Tail is like, CAN’T YOU SEE THE GOTDAMN SUN MOVING, ENDEAVOR STILL OUTCHEA. Endeavor is up, flying again, with them flames at his back. He ain’t done with Nomu. Endeavor figured it out, he can’t worry about capture. He gotta go for the head like Endgame Thor.

He ain’t alone though cuz Hawks BAAAACK. He distracting Nomu and keeping chase while splitting off feathers for Endeavor. Hawks takes a hit, but he done gave Endeavor wings. Some Fire ass wings, yo! Endeavor catches Nomu and puts that hot flame in his mouth. But Nomu done bit down on the bullet. Endeavor is like, aiight, bet, we going to space, yo. Endeavor taking this dude high enough have his own orbit. Up where he can let fo for real. And even though he hate this shit, Endeavor LETS THAT PLUS ULTRA RING OUT. Man, I wasn’t ready for that. I just wasn’t ready. He put that prominent burn all up in Nomu’s jawline and left him in the oven too long. They came crashing back down to the earth, and Endeavor got the one fist raised like he protesting from the Olympic podium. 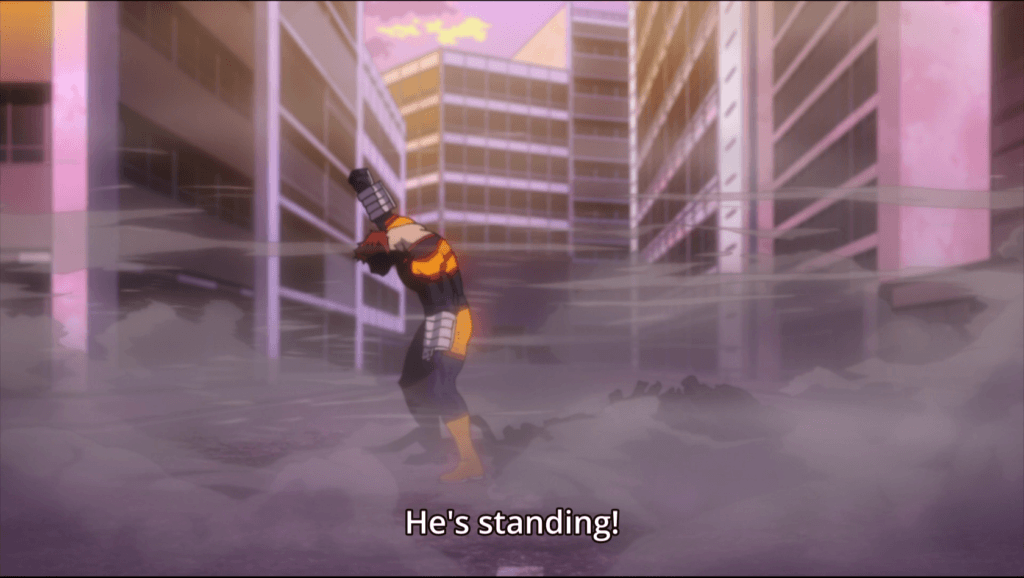 Everybody is all fucked. All Might clutching his chest like Fred Sanford. Shoto in the prayer pose. Midoriya inspired. AND BAKUGO IS NOT FUCKING IMPRESSED. My dude looking like he just watched an unsatisfying episode of Law & Order. I can’t… 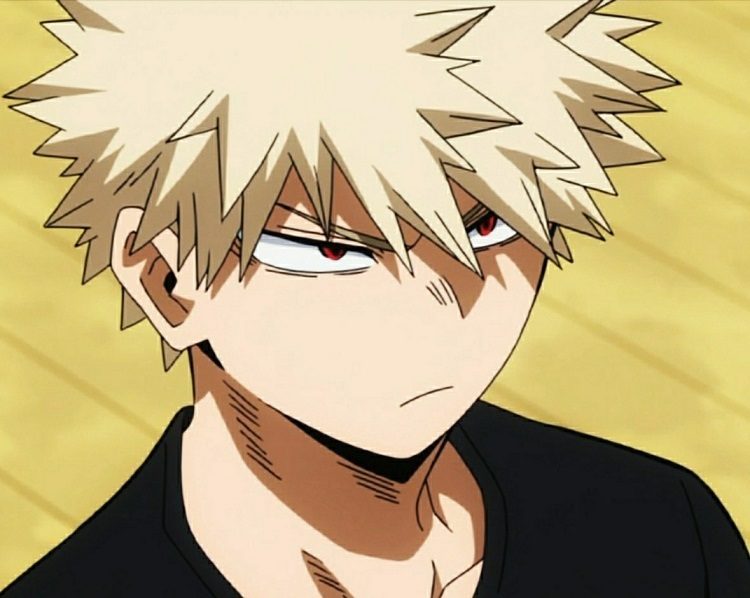 And that post credit bump, sheeeeiiiit. Midoriya is knocked the fuck out in his dorm, but he dreams about the previous One for All users on some past Avatar lives type of shit. My dude woke up with some full cowling in his room, breaking windows and shit. He’s the Ninth…and that’s all we know. TILL NEXT SEASON. Got damn, that’s how you end a season. See y’all for season five quirks and quirkless.

Enjoy My Hero Academia? Check out our review of series here.