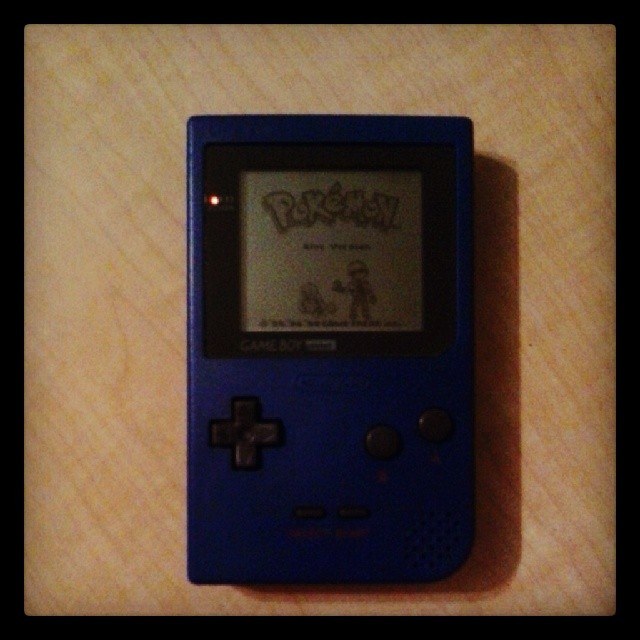 At some point in our lives we all fall victim to the latest crazes and fads. Don’t ask me how and don’t ask me why; like the color of the leaves changing in the fall, fads are just something that happens. Reminders of those periods in our lives are hiding all around us: that collection of Beanie Babies you swore was going to be worth something someday, those photographs you have laying around in the cracks of crevices of your computer of you wearing the trendiest fashions of yesteryear. I’m talking 5xl white tees, Adidas shelltoes, door-knocker earrings, Bathing Ape hoodies, and Hammer pants. Damn, why you ain’t delete that shit?

Just about everything, no matter how small and seemingly insignificant, triggers a memory of moments in when life was a bit simpler. This is a story about one of the greatest Pokémon Masters to ever pick up a Pokédex.

While cleaning my room I found my old Gameboy Pocket, lodged into the back of other relics from my past. It was my original copy of Pokémon Blue. Let me tell you, the Generation 1 series (red/blue/yellow) are without a doubt my favorite games of all time. One day I would grow old, get married, and on that altar I would have to look across into my beloved’s eyes hiding the fact that I know good and well that I wouldn’t be able to love her as much as I love the Gen 1 series. [quote_left]”I was in lunch and recess handing out fades during gulps of Go-Gurt on the regular.”[/quote_left]As street prophet Nayvadius Wilburn once loosely put it, “You know I’d choose the Pokémon over you, you know I ain’t scared to lose you.” I love those games. Better yet, I love the memories they gave me.

Let me give you a bit of context. At 24 I am one of the youngest members on staff. I was born in 91’ and was raised in the heart of Pokémon fever. At the time it seemed like Pokémon was all anybody ever talked about. It was in the schools, it was in the homes, at the mall, it was the topic of several sermons on Sundays. It was literally everywhere, and for once the young boy that was usually three systems behind found himself right in the middle of it. I got hooked the same way anyone else did, watching the anime after school. The show which cycled a kid from a small town named Ash Ketchum who sets out on a journey with the intentions of taming wild and dangerous beasts called Pokémon. Episode after episode, Ash captured and trained his Pokémon in order to fight other trainers for badges and bragging rights. After collecting eight of these badges Ash would be eligible to compete in the Pokémon League Tournament for the chance of ultimate bragging rights and the right to call himself a Pokémon Master. I, being all of 8 at the time, ate that shit up, as did everyone around me.

Here was this kid who was all of 10 years old, yet had more collective experience than my entire third grade class. My mother was strict — I could barely Rollerblade down the block by myself without hearing grief — and yet this kid’s mom was letting him scour the Indigo Region in search of creatures that could potentially kill him.

Fictional or not, I wanted to be just like Ash. I thought the best start was by picking up the card game. Every few weeks I would grab my allowance and head into my local comic book shop to pick up a starter pack or two. I would eye the rare holographic cards on display such as Charizard, which realistically might have been around $15 bucks, but on a kid’s salary pretty much looked like $1500. In retrospect I might have been better in the trading card game than I was in the video game.

I took no L’s, fam. I was at lunch and recess handing out fades during gulps of Go-Gurt. Soon after, my legend and reputation would start to grow and I’d start building a little crowd around me whenever I had a match. I’m talking the teachers and staff, my boys, girls. For once I was the center of attention for something other than being one of maybe twenty Black kids in the entire school, and I was soaking all that shit in. [quote_right]”I was smelling myself so hard I felt I had nothing to worry about because my confidence was at Gary Oak levels”[/quote_right]

I changed the game. The kids eventually hated me because I had the crown. They all wanted the top spot so badly that they were willing to raise the stakes. Soon we were putting our top three cards on the line, and let’s just say I never had to buy booster packs again. My last match during school, I remember demolishing this really popular kid who came from a bit of money. Instead of getting up and accepting defeat gracefully like all the others, he asks for a rematch and puts up three holographic cards, including Charizard. I tore this kid up so bad that when I reached to claim my new cards he tried to sucker punch me! So here we are, two kids scrapping in the middle of the playground — or should I say here am I kicking this entitled prick’s face in — when we got snagged up and taken to the Principal’s office.

Instead of lying about the cause of the fight to protect the culture, this kid sings like a canary and gets a school-wide crackdown on the card game. Even worse, the principal made me give the cards back after the boy’s mother came up to complain about how I dirtied her son’s clothes. Lady, that’s what happens when you send your baby out into a Pokémon Battle with killers! We taunted that boy so bad he ended up changing schools.

One of the teachers really did feel bad for me, she knew I was a smart kid and saw how much I enjoyed the game. After class one day she gave me the information to an area-wide TCG competition and told me where to sign up. A few weekends later my mom and I were on the city bus heading down to compete. At my Mom’s urging I only came with about 60 of my cards, but at the time I was smelling myself so hard I felt I had nothing to worry about because my confidence was at Gary Oak levels.

When I arrived I saw all the other kids socializing, trading cards, and being all around joyous, and I have to tell you… I was disgusted. Like any reality show starlet from the late 2000’s would attest, I wasn’t at that competition to make friends. I came on a mission and the only thing that stood in the way of me and greatness was everyone else in that room. I looked upon my surroundings with the same level of disgust as Anakin Skywalker when he stepped into the Jedi Temple.

I ended up taking my first real loss, which landed me in Third place. I blamed my mother on the ride home for not letting me bring my entire deck, until she had to pop me and remind me “what color were we?” I was so distraught that I never picked up TCG again after that and contemplated giving up Pocket Monster for good. That Christmas, however, my Uncle winded up gifting me a new Gameboy with that same copy of Pokémon Blue that invigorated my love of the franchise again. I had to take a step back and humble myself so I could learn how to just sit back and have fun.

I met a lot of new friends at school who were just as into Pokémon as I was. We collected, battled, and traded together. We went over each other’s houses, went to each other’s Pokémon-themed birthday parties, bought all of the merch (I may have shot over a hot Youtube link to “Misty’s Song” to a few girls I was interested in back in the MySpace days) and even cried together when Ash got turned to stone when we saw Mewtwo Strikes Back opening weekend with our parents.

I was the first one out of my friends to reach the Indigo Plateau and face the Elite Four. I still remember where I was, what time of year it was. I was sitting on my Mom’s treadmill, alone in her room in the fall, and after several tries I finally was able to get Lance’s fabled Dragonite down to a sliver of health. I couldn’t start celebrating yet though because he had me down to my last few Pokémon and I was completely out of Revives and Max Potions. If I lost I would have just wasted almost two hours of my life that I can’t get back, but if I won… well, I could think about that until the match was over. I took out my Blastoise, killed instantly. I took out my Zapdos, killed just as fast.

I was officially down to my last, Dragonite has just a speck of health remaining. My Pokémon was on a way lower level than his, and I knew if Lance went first then it’s sure to be a victory for him and I’d have to start all the way over. If I went first I could make a quick go at it. “Nidoran, I choose you!” —CRAP he has first go. But wait! Nidoran was still standing after the hit, but he was confused. Damn, missed the attack, plus caused myself damage due to confusion, but — oh wait Lance missed his attack too. Here it goes, for all the marbles aaaaaand…

GOT IT! I’ve never been so happy and so proud of myself in my life. I danced and jumped around the room for what I was able to accomplish, when all of a sudden I just felt sad. It finally dawned on me, this was pretty much it for me. All of the card battles, all of the money my Mom spent on merch, all of the days I missed from school faking sick just to see if Ash and the gang were going to make it off St. Anne in one piece. All of that led to this single moment of triumph, and to be honest, I didn’t know where to go from there. I felt I had reached the point of no return in my childhood, and that it was time to move on for my own sake.

Sure, I dabbled in a few of the next Generations of the series, but it was never the same as the first time. During my childhood I thought that I wanted to be just like Ash — to have experiences and, in general, just live. Instead I learned that the person I most desired to be was myself; a fierce competitor, an excellent strategist, and an even better friend.

Flicking on this worn-out Gameboy more than 15 years later, it’s hard not to reminisce and be thankful for the experiences I went through back then. Hmm, I wonder if my Pokémon cards are anywhere around here. Better yet, I wonder what kind of deals on Ebay I can find for a copy of Alpha Sapphire.