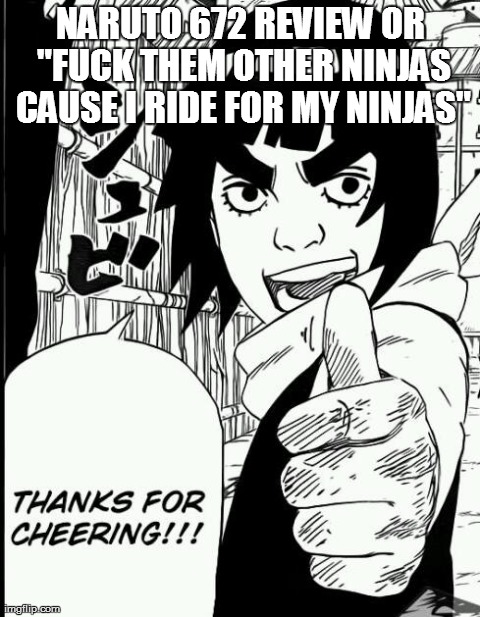 We learn reincarnations of the Sage of six path’s sons are Naruto and Sasuke last issue. This issue we are back to that taijutsu trap game with Gai vs Madara. I am not ashamed to tell you I needed a moment while reading this chapter. There were levels to this Gai this week. We see him going for his game over attack “The Night Moth” while kakashi is watching him and remembering when the first met outside the academy. Kakashi was a dick when he was younger yo. His father “The White Fang” sees Gai’s potential and tells Kakashi.

Then proceed to get his fucking innards roooooooooooooooocked so disrespectful tho THAT IS COMPLETE AND UTTER DISRESPECT SON!!!!

Gai Kicked summoned a fucking chakra dragon around his leg homeboy so hard it shattered his own damn leg, shattered but wrecked house on Madara’s ribcage. Gai is the king of hand to hand and he was set to go out like the Capital G of all G’s. To the point where Madara says “ha, you almost killed me”. Madara goes in for the kill but you know Naruto had to show up cool as fuck, then proceed to save an unconscious Gai’s heart dying out like its nothing… LIKE ITS NOTHING. I woulda been fine with Gai dying but sheeeeeeit Naruto aint bout letting that happen

I’ll close it out with these tweet cause it says it all. Tell’em Danez