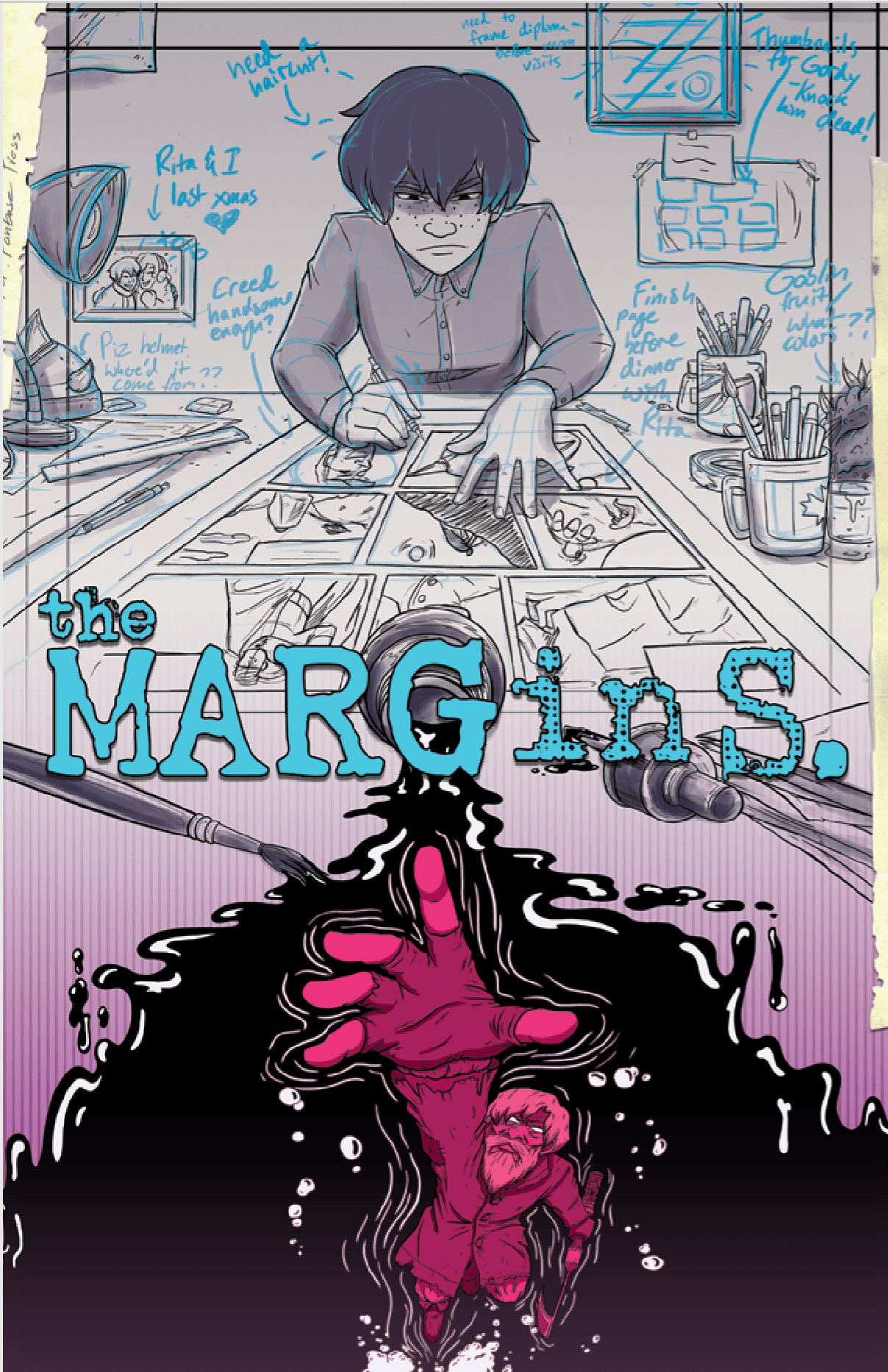 (of a creative work) referring to itself or to conventions of its genres; self-referential.

To call The Margins a story about the creative process would be to disregard the various fantastical elements that are littered throughout the story. But to call The Margins a fantasy would disregard its honest depiction of a struggling artist. Naturally, The Margins find itself in the interspace between these two genres and navigates this complicated in between with a deft hand. 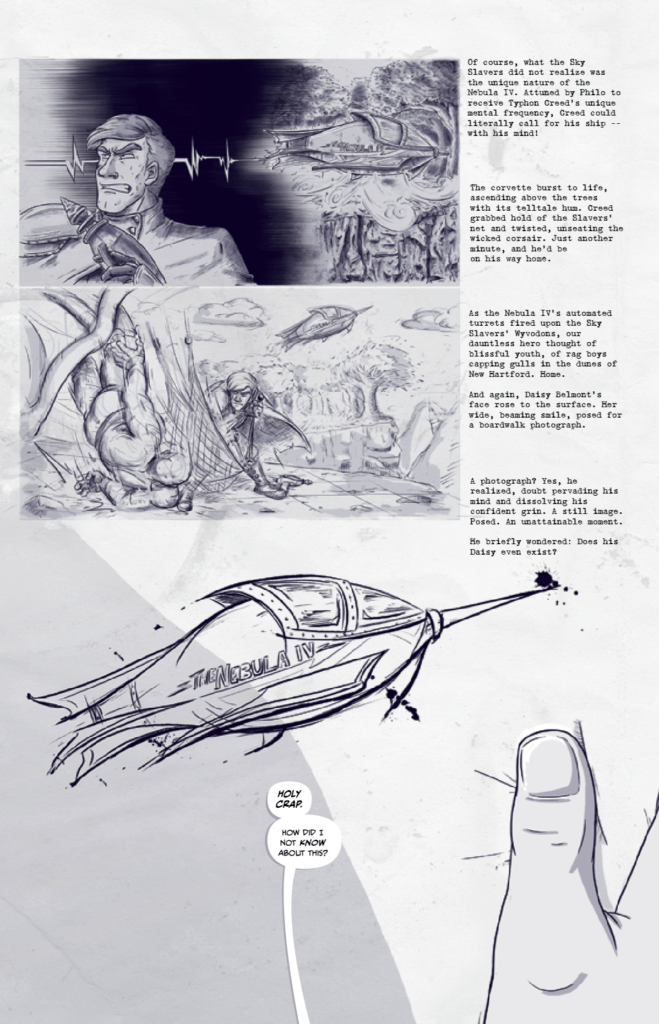 The first act of the story starts of strong, giving us background into Gordy Lamb, aforementioned recluse, and Charley and Rita. The former is a very familiar depiction of white nerdity, and the later is a queer couple that moved to Portland to be together. The first conversation that Charley and Rita have sounds like something you could overhear at any coffee shop. It’s a natural back and forth between two partners who are struggling to adapt to a new environment and there’s no extraordinary conflict. It’s one of the best example of queer characters whose queerness is not the only thing that define them. Rita is an aspiring chef with lots of optimism and faith in humanity. Charley is an aspiring artist who has just a touch of misanthropic tendencies and a connection to the mysterious fantasy world of Elad, which seems to be something more than just a story in an old manuscript. 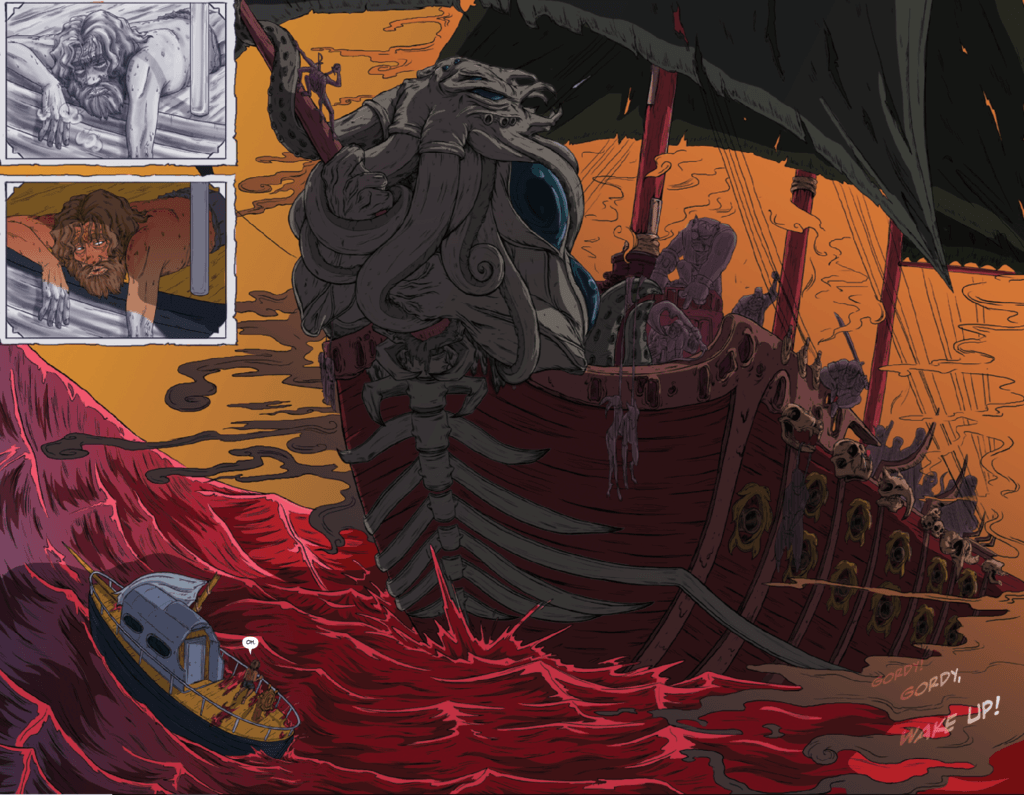 The fantastical element of The Margins stem from the existence of Elad, a high fantasy realm that becomes connected to Charley as she illustrates Lamb’s great grandfather manuscript. The magic of the world gets factored into the story’s second and third acts and provides a heaping bunch of metacommentary on the process of creating a comic and adapting work. Part of The Margins is the discovery of these magical elements, so we won’t delve too deeply into them in this review, but you should be assured that if you love fantasy this book has plenty of it.

What truly makes Accampo and Montgomery’s tale came to life is the enchanting artwork of Donahue. The skeleton of the story requires a mastery of multiple mediums and Donahue does a wonderful job illustrating cinematic story boards, beautiful high fantasy scenes, and homey depictions of Portland. The end result is something that feels uniquely comic book-ish, something that could only every exist in this particular format because of how it presents narrative and information. The composition of pages, the way artwork bleeds from panel to panel, the use of color, the level of detail that one can seek out in a still image. 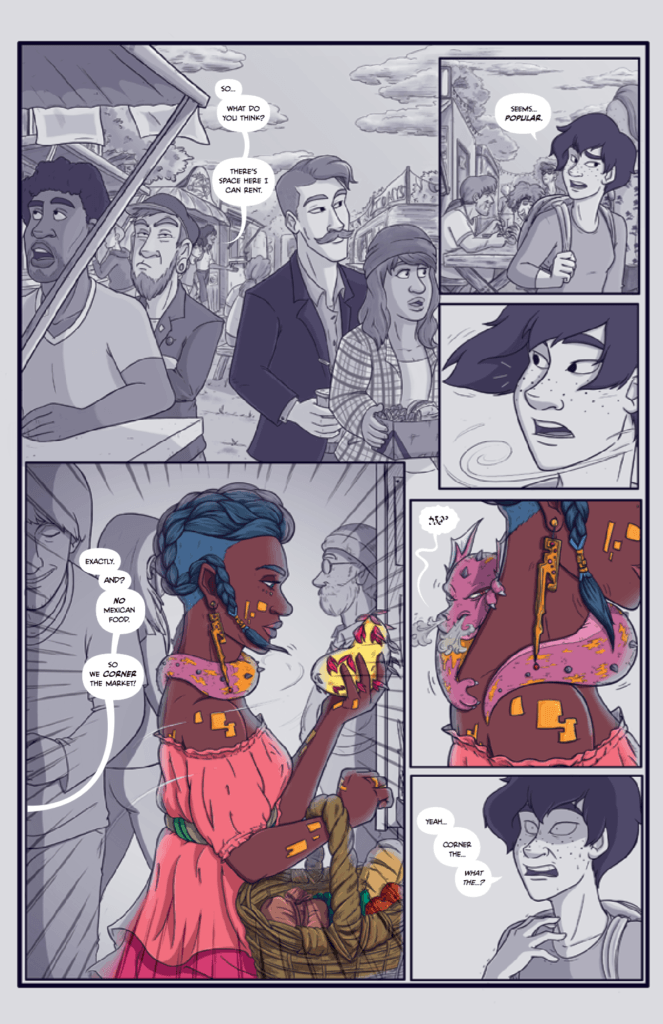 Most of my critique stems from the prolonged second act. It becomes easy to lose track of some of the cause and effect between scenes and the story gets very busy trying to world build to the point where I personally had to reread sections of the story to try and understand it. It’s a complicated story, but I felt like I had to reread pages to piece together how the artist thread and Elad thread.

All in all, I enjoyed my time with The Margins. While I have minor qualms, the premise and overall execution of the story make it an easy recommendation for fellow creators interested in the craft.