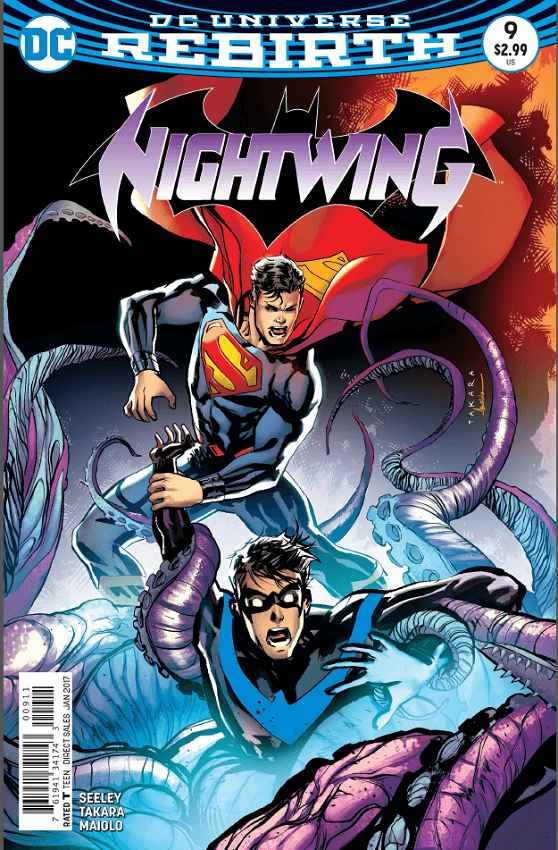 After a pretty successful run of arcs to open Nightwing’s new existence in Gotham, we were treated to what I’m guessing was a one shot of Nightwing joining alt-Superman for a mini adventure. Apparently, Grayson has been having nightmares where his friends are getting merked in gruesome ways and he’s helpless to stop. Alt-Superman recognizes this as a tactic from a foe in his home dimension and decides to go into Grayson’s dreams to help him defeat the dream invading foe. Meh. The Inception-light story element serves a couple of masters as it makes way for a surreal setting in Nightwing’s dreamscape where literally anything can happen, but overall gives us a plot that can be thoroughly unattached from anything else in the story thus far.

There’s lots of fighting, lots of alt-Superman mentorship and guidance and a nice/neat resolution, but the story doesn’t really elevate to a height of supreme interest. Essentially, this seems to be just a transition issue to introduce Nightwing to a new (and for us familiar) setting. And that’s fine, not every issue needs to be a must read the second our comic book opens on Wednesday morning. it’s not a waste of your time by any means, but its not a highlight of the series by any stretch. 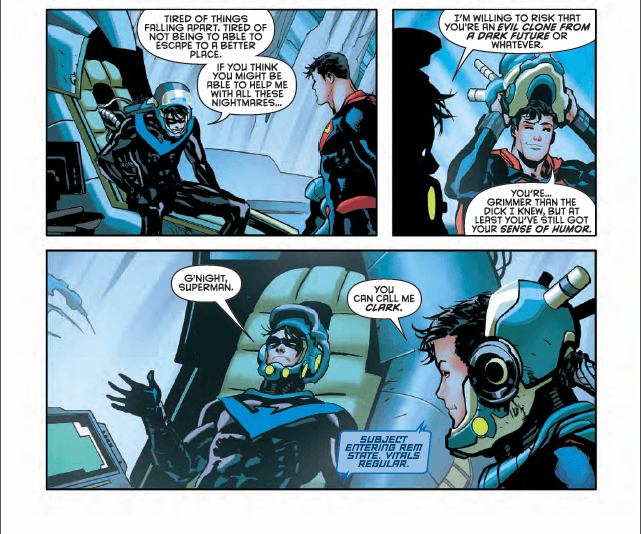 Takara fills in this month on the art and the style is definitely suited for the trippy dreamscape. Nothing explicitly stands out, but I did think the character models were handled well in the exterior environments and the plot of this particular book allowed Takara to draw just about everybody in the DCU. At the end of the day, and adequate showing to carry the water for this particular issue.

Nightwing takes a month off from the arc it was building and sacrificed an issue for the transition of Nightwing to familiar places. And that’s enough, I’m still excited to see Nightwing’s progression and maturation with this creative team.