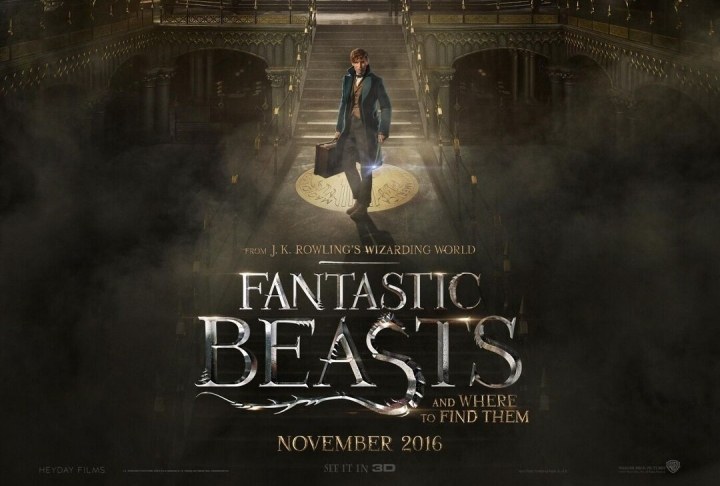 It has been 5 years since the last Harry Potter film graced the silver screen and 2016 beginning to look as refreshing as a cold glass of butter beer. In February, J.K.Rowling announced the production of the forthcoming screenplay Harry Potter and the Cursed Child Parts I & II, which is set 19 years after Harry Potter and the Deathly Hallows ended. Later when casting was announced, we learned that the woman cast as Hermione (Noma Dumezweni) is Black and all the haters and the celebrators went crazy in the Twittersphere.

If that weren’t enough, the mother of the Wizarding World drops another bomb by giving us the full trailer to Fantastic Beasts and Where to Find Them!

I about lost my mind when I saw this. Here I am trying to justify thousands of dollars on a rushed passport and trip to London to see the play before the end of May and J.K. is all “chill to November and I got you, boo.” YES!

Fantastic Beasts and Where to Find Them does not pick up where the Harry Potter books or films left off at all, but gives us deeper insight into magizoology (the study of magical creatures). The film follows the life of Newt Scamander, writer of the book from whom the film is based and takes place at the Magical Congress of the United States of America in 1926. If you were looking to get another glimpse at Harry, Hermione or Ron in this one, that seems to be highly unlikely since this is 70 years prior to the first Harry Potter book.

If you were looking to see if J.K. was going to slip some more #blackgirlmagic up in the Wizarding World, you’ve got the right movie. Fantastic Beasts will not only include Newt Scamander and a possible glimpse at Albus Dumbledore, but we will get to know Seraphina.

Seraphina Picquery, the President of the Magical Congress of the United States of America is a sistah y’all! Yes! You may recognize Carmen Elizabeth Ejogo for her role as the matriarch Coretta Scott King in both Selma (2015) and Boycott (2001). Here she is Head Sistah In Charge in 1926 America, ya’ll. A Black woman! Ok… let’s refresh ourselves on a little American history. In Muggle America circa 1926, Calvin Coolidge was the 30th POTUS, the House and the Senate reigned Republican. 1926 is only 61 years post slavery. Calvin Coolidge made it known that he was against the unjust treatment of Black folks and repeatedly called for laws against lynching.

In 1926 Carter G. Woodson declared the second week in February as “Negro History Week,” what we now know as Black History Month. However, there were no senators of congress members who were Black or female. So basically…. Fantastic Beasts may be getting ready to show us how progressive the Wizarding World was or has always been, giving us full on literal #BLACKGIRLMAGIC.

Here’s what I can tell you to expect from Fantastic Beasts once you place your hot sauce back in your bag and set your lemonade down for a second or two:

1. A Hufflepuff protagonist who is a Hogwarts drop out (not really, he was expelled)
2. Magic in America
3. A suitcase full of all kinds of crazy
4. #blackgirlmagic
5. Political drama sans Trump and of course,
6. Fantastic Beasts

Fantastic Beasts is at the top of my “must see” list for the year. Fantastic Beasts and Where to Find Them is scheduled to be released on November 18, 2016 worldwide in both 3D and IMAX 4K Laser format. In true Rowling fashion, the film doesn’t stop there. Fantastic Beasts is set to be a trilogy with release dates rumored for 2018 and 2020 consecutively.