Pacific Rim Uprising already knows what the deal is in terms of its role as a sequel. The film makes enough references to the first movie while expanding the universe post-war with the Kaiju (big ass monsters). The audience is brought up to speed quickly, it’s ten years after the war was won. Some cities rebuilt while others did not. Jake Pentecost (John Boyega) thrives in an underworld where there are no rules. Currency is in the eye of the beholder but leftover Jaeger parts reap big rewards. Jake Pentecost is a mixture of Han Solo and Lando Calrissian when we meet him in the midst of a deal.

It’s another chance encounter with a fellow underworld thief Amara Namani (Cailee Spaeny) that thrusts Jake back into Pan-Pacific Defense Corps as an instructor, thanks to his sister Mako Mori (Rinko Kikuchi). Amara is sent to the PPDC as well. When we meet Nathan Lambert (Scott Eastwood), Jake’s former life as a Jaeger pilot and as Stacker Pentecost’s son comes to light. There’s more to battle then just monsters in this sequel as the Jaeger program’s future is threatened by Lien Shawo (Tian Jing).

Pacific Rim Uprising will charm your face off

John Boyega is so charming and likable in real life that it’s an effortless transition for that same charisma on screen. Jake can be a bit self-centered one moment and yet a great team player the next. Jake’s interactions with Mako Mori are believable as on-screen family members should be. We see how close they are and what Jake is willing to set aside for her. Boyega and Eastwood work well on screen as Boyega’s character can clearly annoy Eastwood’s with ease. Jake and Nathan represent a different side of Jaeger pilots that we’ve seen as they’re coming back together, Nathan holding a lot of animosity and disappointment toward Jake but when it’s show time, they’re a cohesive tag team unit.

What I like about the sequel is this time around the pilots are still from various countries, however, they aren’t all Japanese pilots in a Japanese Jaeger or Indian pilots in an Indian Jaeger. They’re pilots of different nationalities and ethnicities mixed together to pilot the Jaegers. Having been 10 years later from the first film, realistically that greater diversity makes sense and is a great detail to the development of the PPDC’s depth. 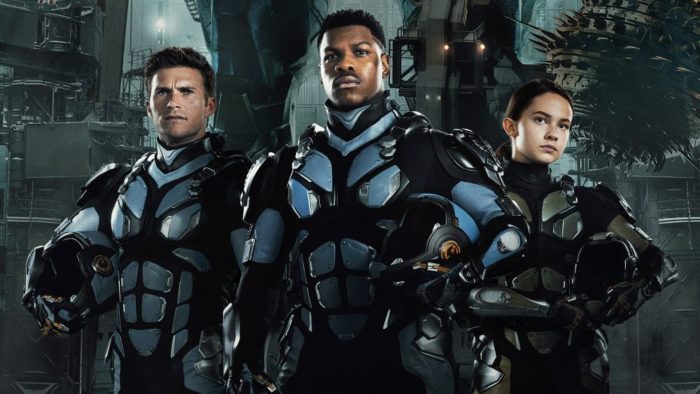 There are new faces to the film via Cadet Suresh (Karan Brar), Cadet Jinhai (Wesley Wong), Cadet Viktoria (Ivanna Sakhno), Cadet Ryoichi (Mackenyu), Cadet Meilin (Lily Ji), Cadet Renata (Shyrely Rodriguez), and Amara Namani (Cailee Spaeny) as the newest cadet. There is a heavy emphasis on teamwork and camaraderie that are a constant theme with these cadets. Lambert and Pentecost have two vastly different approaches to teaching these cadets. Again, Boyega is such an adapter as an actor that he not only plays a supportive younger brother but can act as the cool older brother to the cadets. Boyega’s comedic timing as Jake is impeccable throughout the movie and eases tense situations at just the right time.

I won’t give away the threat the monsters present, but I will say it’s in a way that makes sense given how the threat of war and unrest never truly goes away. The fights were way brighter this time around, which is a good stylistic choice. In the first Pacific Rim, shit was was mad dreary. As the world has recovered in Pacific Rim Uprising, showing fights during the day and things being brighter gives the audience an impression of how much things have changed as well as the time that has passed.

I came to see giant robots get fucked up

This is a movie about robots punching the faces of giant monsters. There’s not going to be a reimagining of the wheel here. Yet, Pacific Rim Uprising is a movie that cares. Thought was put out into the series and the characters in it in order to keep the ball rolling for a good reason. I have to note that like Black Panther and A Wrinkle in Time, this film has more people of color than white folks in the main cast with speaking roles! Also: this film passes the Bechdel test as well. I love a good fight scene and this movie delivers that in spades. What’s good about this is that the experience of the cadets shows, they contribute greatly and even with Jake and Lambert present. This is a whole new type of war, they aren’t the heroes of ten years ago, but they’re still the last line of defense. There are some serious beat downs in this film and it all works really well. That’s all you need to know.

For fans of the first film, There are enough appearances of characters from the first film where you’ll say, “Yes!” however, those that don’t appear will leave you wondering their fate (possibly reading fan fiction). There’s clearly room for another go of the series as well (no spoiler, you already knew what it was) but how that will be done is anyone’s guess. Pacific Rim Uprising is an enjoyable sequel that serves it’s purpose and provides an avenue for more stories. If you already know the series, you’re going to be pleased. If you’re not familiar, you’ll still have a good time as well. It’s a win-win either way. Lastly, Big shout-out to John Boyega for all the work he put in behind the scenes as well, helping to produce this film and get it out to world as it had been sitting in obscurity for a minute.