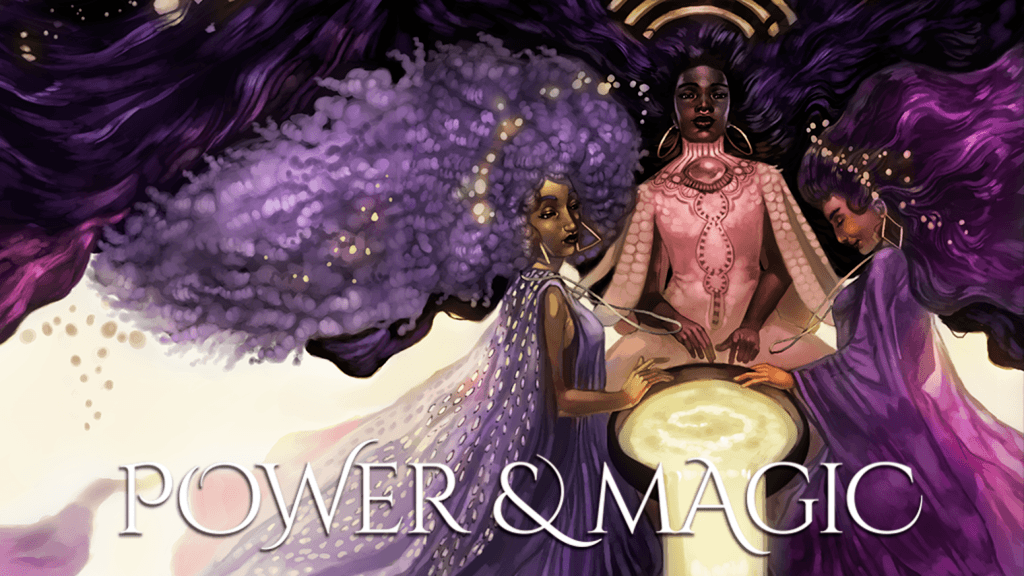 The Queer Witch Anthology from Power and Magic Press is a project that has been near and dear to me for a number for reasons: it was a Kickstarted comics project, it was put out into the world by a publisher of creator-owned comics that is QPOC-operated. Lastly it was led by one of my favorite artists/comics personalities from Twitter which would be Joamette Gil whom I had the opportunity to finally meet in person at Geek Girl Con last year. (Jo gives GREAT hugs by the way!)This review is a long time coming and I’m happy to finally get it out: The Queer Witch Anthology from Power & Magic Press is one of my favorite comics Anthologies that rise from Kickstarter and a book you should have on your shelves.

First thing’s first, I gotta applaud the editorial staff for labeling table of contents with trigger warnings. This was something I noticed immediately on my first read through and wanted to publicly acknowledge because I can’t remember if I did so on Twitter. Here’s a few of my favorite stories that serve as great offerings for what this anthology has to offer:

After The Dust Settles

“After The Dust Settles” focuses on Jia a witch who is quickly working her way through what magic can teach her. One day her mother gives her something that once belonged to her grandmother who was also a witch. It’s a type of family heirloom that has been passed down from generation to generation and it’s a more fitting gift for Jia because her mother never got the chance to read and use it. She takes it, immediately grateful and eager to see what’s within. What she isn’t expecting is to feel so left out of the loop as her grimoire is written in her grandmother’s native language and it’s been far too long since Jia has spoken or felt a need to use it.

Insecurities rush in. Jia is nearly swallowed up by them: she’s never had to work so hard at magic. Everything she’s been taught so far seems insignificant. She feel insignificant. Her magic feels insignificant. On top of that she’s starting to feel like a failure; that she’s be the one that her grandmother, and ultimately her people, all the witches before her will have a legacy that will die with her. I won’t lie to you–it’s a story that will pull on your heartstrings–but it is also a story about dedication. Xu’s short is also about commitment to yourself: to bettering yourself, to believing in yourself and in knowing that your ancestors are never too far away.

Xu’s artsytle masterfully captures the spell casting in a way that sets the tone where you can see Jia’s struggles each and everytime she casts. When she’s studying hard pouring over the text, you can amost see her desperation on the pages. “When the Dust Settles” is a damn good example of the best that this book has to offer.

“Te Perdi” is a darker tale that lets you know from jump that this is a sinking ship: The love of her life is dying. Surely, but ever so slowly and she wants to save her. By any means possible. The main character wants to save her lover and every day tragically brings more bad news than good. At her wits ends of what’s in her power she goes to consult her Abuela. There the two women go through rituals and prayers to different deities with no success.

She then decides to take matters to her own hands. Neogi’s art works swiftly to demonstrate just how otherworldly and frightening the mess our MC can gotten herself into, the grayscale coloring adds to the bleakness of the situation of her lover’s illness and even their vulnerability. Overall, “Te Perdi” is about coming to terms with what has to happen and how our loved ones want us to cope, to live and remember us–as they were.

Your Heart is An Apple 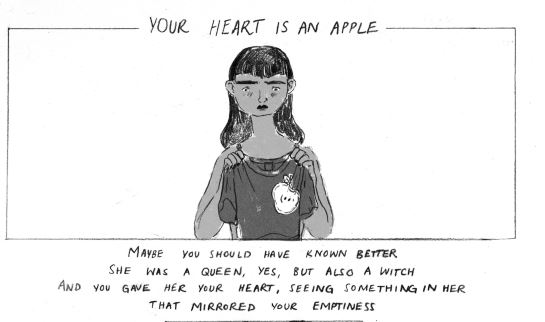 “Your Heart is An Apple” will resonate with readers who have been in love and felt less than whole when that relationship ceased to be. It may also resonate with readers who have found themselves in that slump, that limbo, the place where you haven’t quite moved on but you’re not sure what steps to take to do so. Our main character who is named Snow is drifting–she’s less than who she was and is struggling to move on. Summer has come and she bravely tries again. She goes on dates, tries to open herself up, and be present.

There’s layers to the writing here: being hurt, feeling less than and wanting better, to do better, to not get held back or sucked back into the life of someone who doesn’t want you anymore. (Also? In the other women Snow meets I totally get the nod to fairy tale stories and lore!)

Sekar’s art isn’t all crisp lines and it doesn’t have to be when panels of characters blending into the ocean or a bunch of thorns even, drive the story home visually. Perhaps the best message of “Your Heart is An Apple” is to be brave and open your heart to trust again because you never know how and when love can heal and transform you. 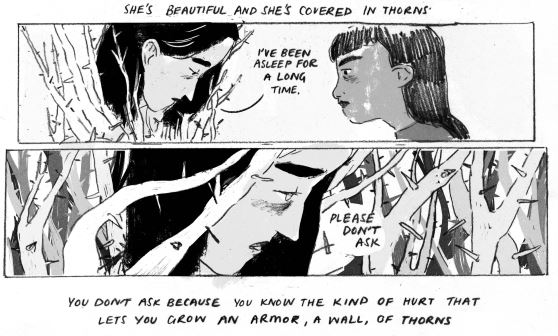 As The Roots Undo 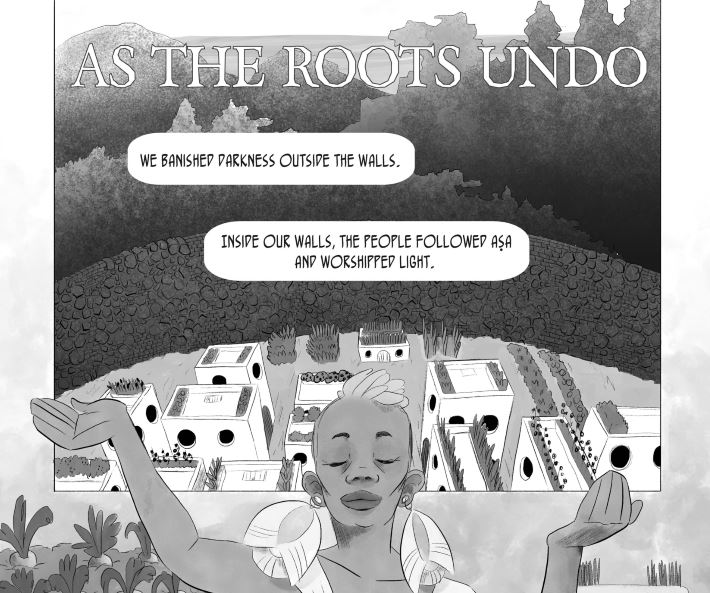 Editor in chief of Power & Magic Press and artist in her own right, Gil’s story “As The Roots Undo” is one of the later entries that graces the book. It’s a shorter but still worthy contender as one of the best stories as it deals with loving someone and the repercussions of doing so when the one you love is someone who shouldn’t. As it is in life not everyone follows the status quo: not everyone follows the same path.

That is what happens here in this short and it reveals much about our main character and what must be given up to follow the one you adore. Being different will cast you off, maybe cause to banish you but if you know what really matters in the grand scheme of it all–it doesn’t matter. Knowing where your heart truly is will led you from the light to the darkness and beyond because that’s where your truth lies and that’s where you and where your true path will align. 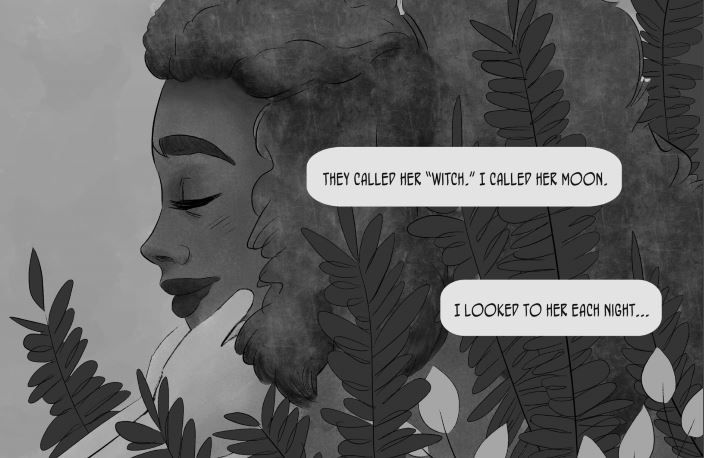 Power & Magic carried so much weight! Here you had themes of grief, bravery, life transitions, and challenging the norm. You had your children of immigrants, children being wanting to make their ancestors proud, and children seeking validation. You had Folks who didn’t see them selves as female all the time, those who were falling in love, disabled folks, folks just trying to cope in healthy ways. You had way younger characters and older characters. People using sign language and people using their canes to get around. Each creative team in this book brought their A game and it showed weaving some many great tales involving magic, mischeiviousness, wisdom and the power of friendship, community and sometimes love.

Follow Power & Magic Press’s official Twitter and Tumblr. Subscribe to their newsletter as well! Copies of the book both physical soft cover and digital copies can be found here.

As I wrote in my earlier coverage of P&M, I wanted to place an emphasis on how imperative that it is that we support the types of media that has the representation that we want to see, that we talk about and want for future generations to come. Power & Magic Press is one of those publishers that I really want to see thrive so we can see future anthologies and comic projects from womenfolk and also other marginalized folks who make comics.