Princeless is back, y’all! For those of you who were reading  Princeless: The  Pirate Princess with art team Ted Brandt and Rosy Higgins, that will return with Raven’s solo series next month in July, (I was at my comicbook store last Saturday and my folks ordered me the Katie Cook variant at my request!). Princeless: Be Yourself #1 is a fabulous issue that hits back to the basics with Whitley joined by artist and Princeless veteran Emily Martin, alongside Brett Grunig and Emily Spura. We’re going back to Adrienne’s quest to free another sister of hers, and this time it’s Angoisse. But Adrienne is not alone, she traveling with Bedelia, and of course the  faithful dragon steed Sparky. 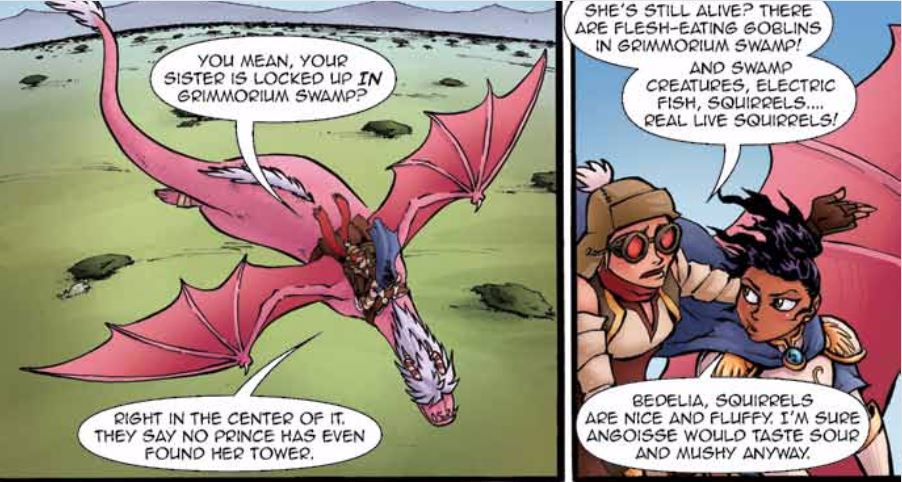 Back at the castle, the Prince Devon is enjoying one of his hobbies (sewing) when his toxic masculinity-spewing father (bless his heart), the King, storms in and drags him along for an adventure meant to toughen him up. They ride out determined to investigate the scene where the Queen’s carriage was last seen and gain any insight or clue on her current whereabouts. What follows is the King introducing Devon to some very important characters from issues back and a very keen observation and somewhat of an appraisal of him that leads to more and more clues about the Black Knight, the missing Queen, and a number of other relating issues. 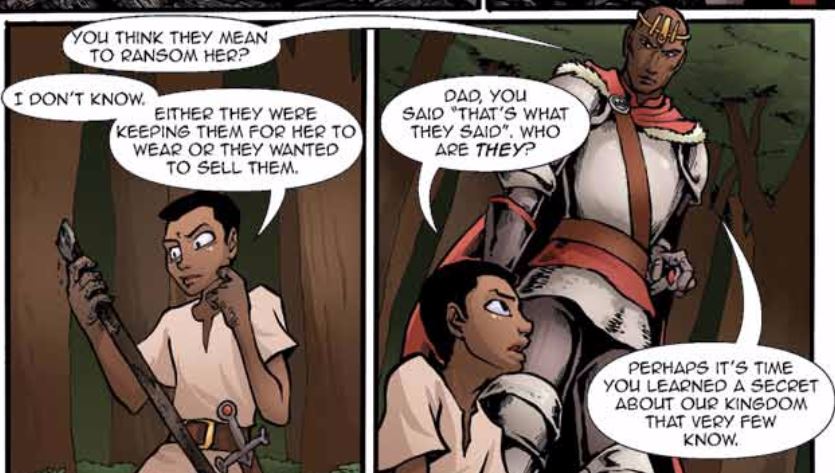 Sparky sends the girls into deep trouble DEEP into the swamp and they have only themselves to get out. I was snort-laughing because Andrienne pulled a classic Winnie The Pooh here and things just get worse and worse on her end.

Hooray for more Princeless! Those girls above just finished their Free Comic book Day freebies and the Pirate Princeless issues so I’m ready to present them with Be Yourself issue #1 when I see them next week and let them go bananas. A solid start for #TeamPrinceless going back to the original story with hijinks and hilarity and coming one step closer to the Black Knight, and also being dinner (hopefully not for goblins like these) but we still can’t rule out those darn killer squirrels!