Thanks to the recent success of the Bundle for Racial Justice and Equality, players are experiencing many games they might not have tried otherwise. Among the over 1700 titles on display is Pyre, developer SuperGiant Games’ third title. Three years ago, Pyre debuted to a critical reception best characterized as ‘polite confusion’. The creators of indie darlings such as Bastion and Transistor made a game where players manage a fantasy sports team? Not fantasy sports as in ‘an All-Star line-up of legendary real-life players’, but more like ‘a talking dog passes a glowing power orb down field to the horned giantess’?

Unless someone missed a #Blitzball4Life trending tag, there was no reason to believe the game industry was losing out on any particular cross-section of Final Fantasy and FIFA fans. Despite a lack of comparable mechanics, it’s worth discussing the shared narrative arc at the heart of these games. Whether a championship or a Lord of Ultimate Darkness looms at the end, the roads to the finales are paved in much the same way: conflict and competition, level-ups and losses, setbacks and sacrifices. 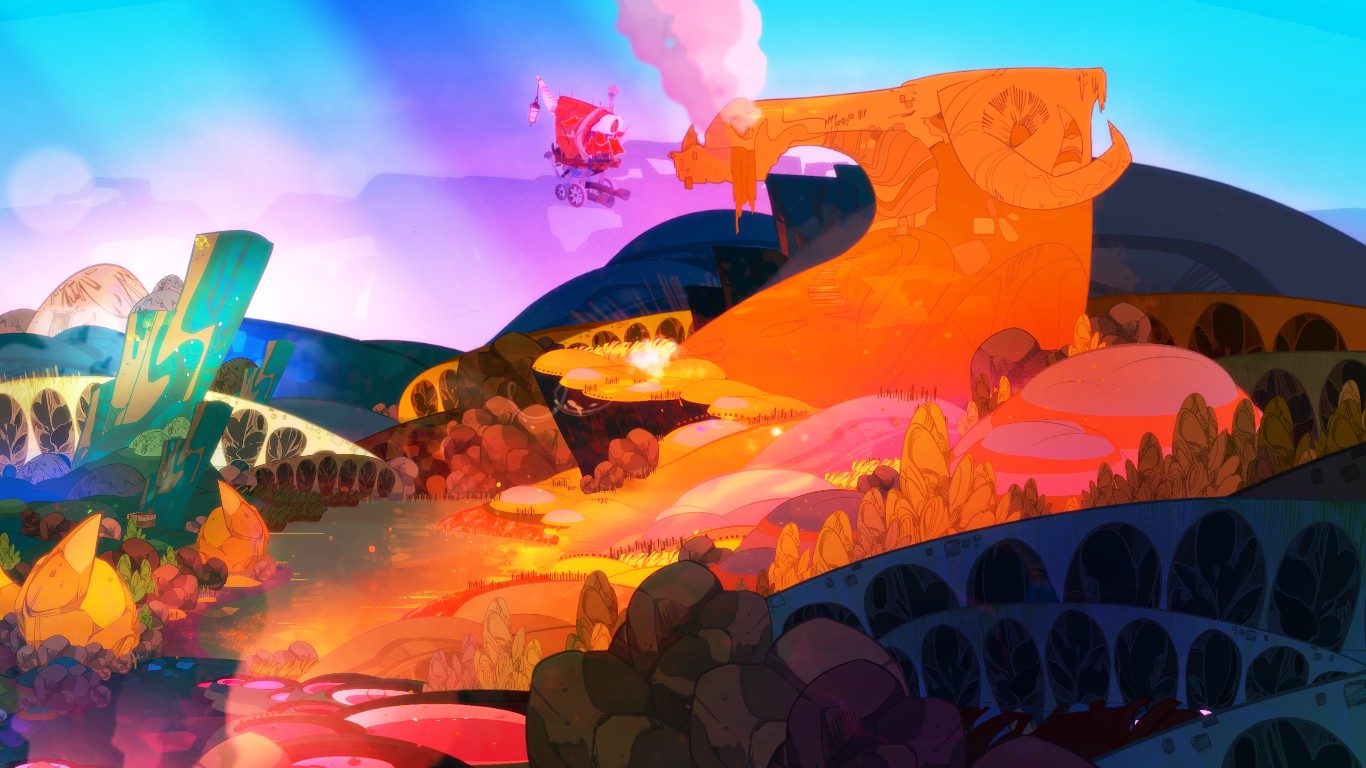 Pyre’s road begins with you…quite literally. Players are embodied (with their own preferred pronouns) in the story as a nameless wanderer in a peculiar desert. Three strangers in a broken-down wagon pick you up, revealing that you share their fate as outcasts in the wasteland known as the Downside. The only way to return from exile is to win your return to the society that exiled you is through the ‘Rites’. Making up the bulk of gameplay, the Rites consist of what could be considered a 3-on-3 game of ‘keep-away’.

Each team has a goal represented by a flame. To score, players must grab the orb at the center of the field and carry it into the other team’s burning goal. Each success lowers the flame, and whichever team’s pyre still burns by the end of the match determines the winner. It is possible to ‘free throw’ the orb into the flame, but max points are made by having your character go for a dunk directly into the blaze. This also, briefly, removes them from play. 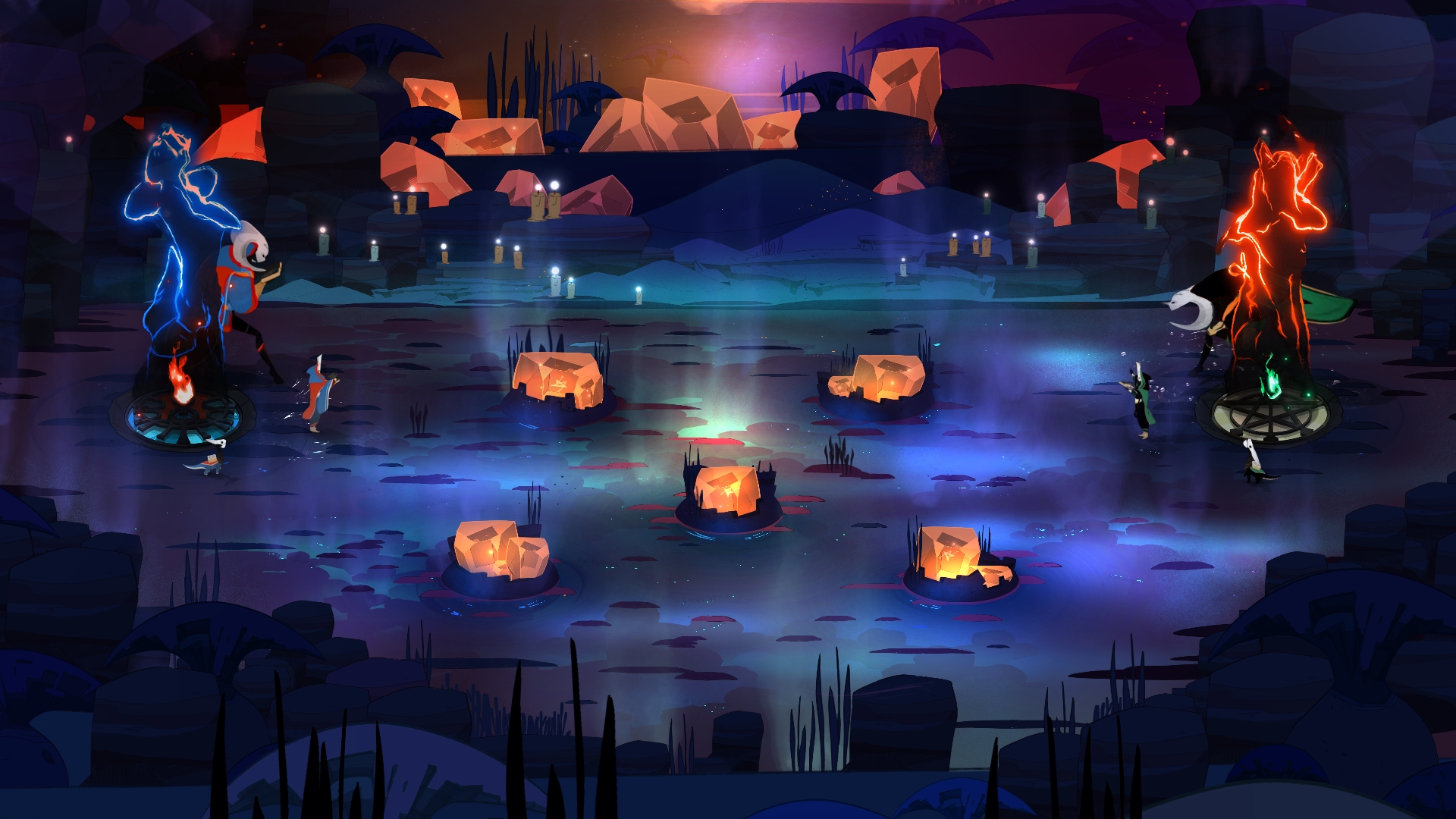 There’s nothing in the rules saying a dog can’t play…whatever the hell game this is.

THINGS LOST IN THE FIRE

To win the Rites, careful juggling of teammates is required to keep you scoring and from being scored on. Even with an RPG-style leveling system to unlock skills, over-reliance on any one star player in the roster is a losing strategy. Winning in Pyre carries just as high a cost, though. The promise of return from exile prized by your band of outcasts and their rivals is a single-seat, one-way ticket. Whoever triumphs must choose someone from their ranks to literally offer up from the Downside.

As the game progresses, those left behind will have other chances to ascend. The question each time remains the same, however: what are you willing to sacrifice for that chance? Do you keep your winning starting line together at the expense of denying them a well-earned retirement? The answers might come easier if the team at SuperGiant hadn’t done such a compelling job of fleshing out Pyre’s characters. 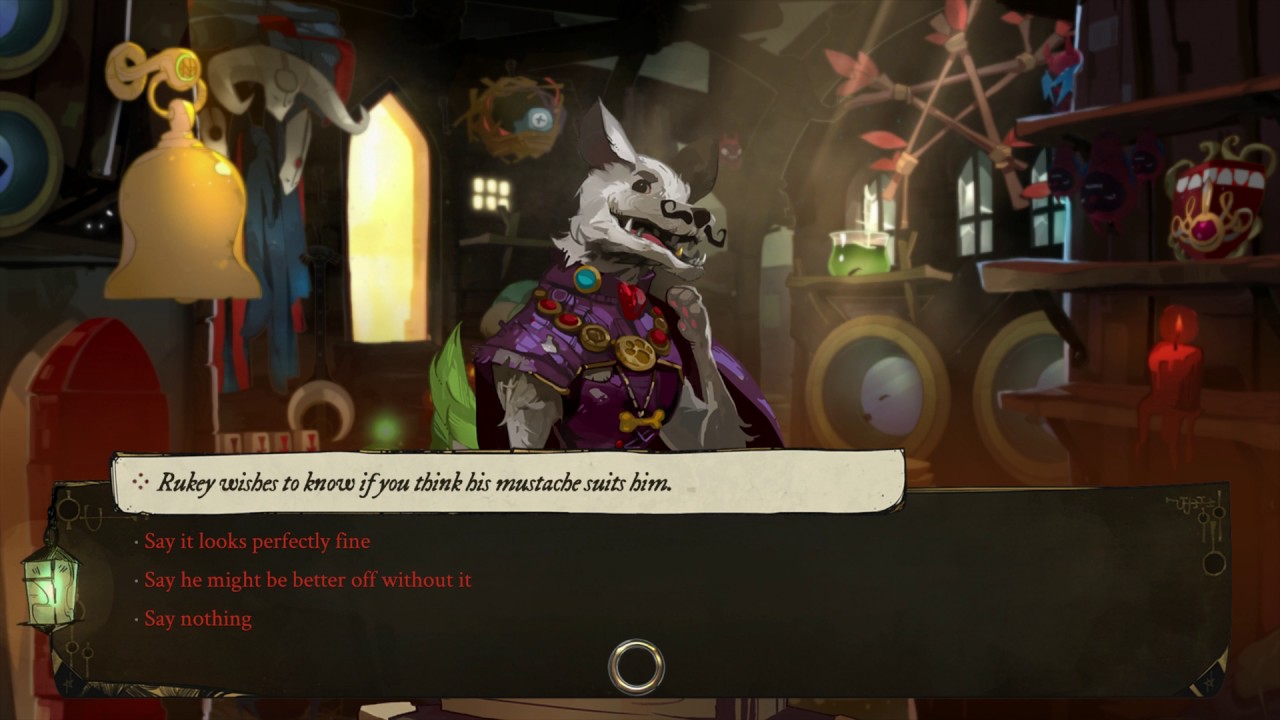 During the down time between Rites, you’ll navigate your team bus / wagon to their next playoff game / destination. Delivered in a visual novel format, players will gradually get to know their teammates and their connections to the bizarre world you traverse. How do they — and you — feel about being pushed to the fringes of a nation? Is a nation that pits its ‘undesirables’ against each other like this even worth rejoining? Is such a nation worth even being allowed to continue?

RPGs are often littered with inconsequential mini-games, but every Rite in Pyre feels weighted with the slow-motion tension of a buzzer-beating shot. Its overall structure may seem limiting, but this makes the way it approaches its subject matter all the stronger. Without spoiling anything, when the inherent inequality of the Rites — and the society that imposes them — are challenged, an opportunity presents itself. Like all choices in this game, however, it comes with a cost. Thankfully, the game itself isn’t all that expensive.

If Pyre passed you by initially, it’s definitely worth a look to see if it sparks anything in you.

8 Out Of 10 Glowing Orb Field Goals