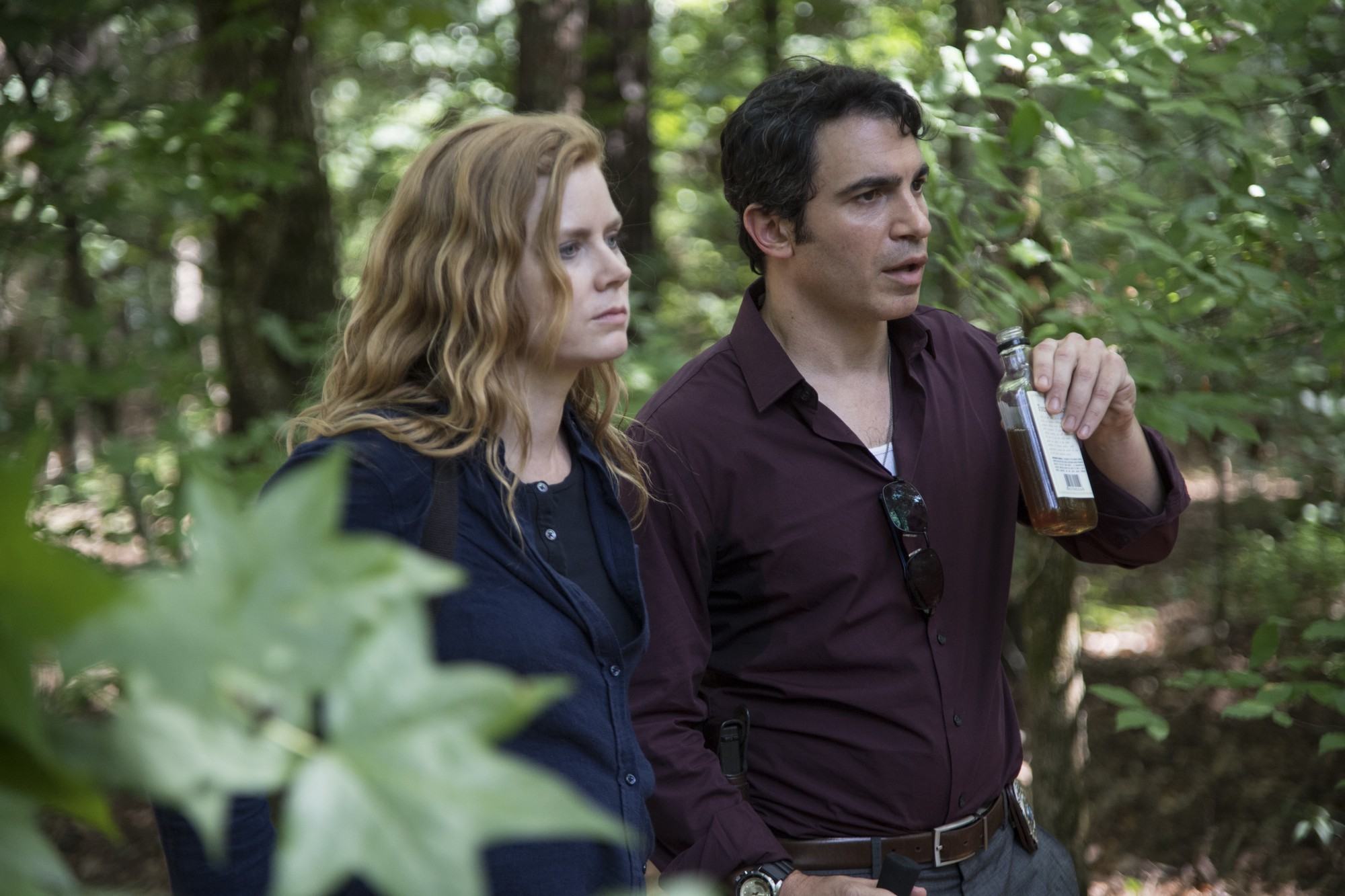 This week on Sharp Objects, Camille takes Kansas City on a gruesome tour of Wind Gap. Alan and Adora’s dysfunctional relationship gets some attention–as does Adora’s work husband, Chief Vickery. Calhoun Day looms on the horizon for Amma, her hoodlums, and the town. John Keene opens up about his sister.

Now that we know what happens, can we just talk about these people? These broken, damaged people? I’m pretty sure that they are all in a race to see who can be the worst.And if they aren’t in the game itself, they’re on the sidelines taking bets and talking shit. And this week, I just can’t. For just a day, I want to not be overwhelming disappointed in people, so for my own mental health’s sake I need to think of them as the best. The best at something, at anything really. Ot the most. I need these people to excel.

Most Accurate Statement Upon Waking

Kansas City wakes up, looks around and say “Shit. I’m still in Wind Gap.” I feel you, fam. If you aren’t from this town full of what barely qualifies as people, I don’t even know how you survive. Everyone hates him even though he’s literally only there to help. And to prevent more murders.

Most Oblivious Parent on Your Kid’s Birthday

Congratulations, Adora. The parents in Sixteen Candles have been holding this title down for decades but here you are coming through dripping with disdain and indifference toward your oldest.

In flashback/memories, we see high school aged Camille in her full cheerleader get up see her mom on her dead sister’d bed crying. Initially, I’m just like “oh that sucks,” but then Alan and Gayla try to throw the world’s saddest surprise party (just the two of them and a cake in the kitchen). Once that happens, I knew this award was yours. Not for being sad. As the parent of a child that died, you get to be sad. But.

But Camille had time enough to grow out a whole ass pixie cut so your daughter didn’t die yesterday.

You definitely had time to call up Betty Crocker or even her sister Mrs. Fields and do a little something for your one surviving kid. But no, you had your eye on this prize. And it’s all yours, Adora.

Who else could it be? I see you, Amma.

You been putting in work at the gym, girl? By “gym” I mean the parking lot behind Staples. By “work” I mean smoking weed with your hoodlum ass friends while thinking of ways you can interfere with your sister doing her job and maybe–if you’re lucky–ruin the one human connection she seems to have with KC. I.See.You. You’re tryna move up from the minor’s and get on Adora’s level?

Camille is up early and looking surprisingly… sober. She’s headed to an all-ladies brunch with her mom. Isn’t that wholesome and quaint and such? Except, Adora aint going. Why, you ask. Because her hand hurts. Se’s feigning gangrene from her run-in with the rose bushes.

Camille is as sick of her mom’s shit as I am and says what I’ve been thinking, “It’s barely a scratch.”

But hold up, Adora is ready. She’s been training her whole life with these hurtful, biting, emotionally devastating comments and now is her time to shine [drum roll]

KC and Vickery in Vickery’s office arguing over… what exactly? Who knows? Who cares? It doesn’t actually matter because what we were actually seeing was an impromptu measure of [squares shoulders; put hand on hips in superhero pose] manliness. It doesn’t matter that are literally on the same side. Or that they are on the same team. Nothing matters except who has more BDE.

Camille is out here doing the lawd’s work. At brunch with these bored gossipy Wind Gap wives, they try to pin her down about who done it. She swings around with the redirect on some [leans in to create a false sense of intimacy] “I really want to know what y’all think.” She never lifts her foot. In this moment, she’s Demarcus Cousins. She never gives away anything. And they are off and running on their Bob Nash and John Keene theories. It was a thing of beauty.

Kansas City AKA Richard AKA Dick AKA Camille’s fake-not-quite-maybe-love interest and Camille are taking a scenic tour of Wind Gap via all its crime scenes. Instead of a picnic basket, they share bottle of cheap booze. Instead of the regular small talk, Camille tells him about mysterious deaths that could have been homicides, but might have been suicides and the ensuing trauma inflicted on the survivors by the town of Wind Gap.

Camille does ask him why he became a cop, so there was some of the typical fair mixed in to their visit the creedy hunter’s shed where KC explained why he thought the killer knew the two dead girls; he must have watched them and waited for them to be alone. Then she took KC to the spot in the woods called the End Zone, where she was either gangraped or engaged in consensual group sex–they debated which.

Then they talked about tire samples and theories on who murdered who and how and when. The date ended with Camille allowing KC to pleasure her… manually, but her rules so, she didn’t let him kiss her or really touch her at all.

Adora really had her husband, Alan, fix her work husband, Chief Vickery “his usual” drink and then essentially kicked him out of the room so the two grownups could talk. And Vickery talmbout my wife sends her love. Adora is like “Oh, send it back to her of course.” Trick, you are longuing on your couch with that woman’s husband, don’t send her shit.

Adora’s absolute dearth of fucks is inspiring. I mean, what could any of us really be doing with our lives? What secret ambitions could we achieve if we killed off any human warmth inside our heart and replaced it with… well… nothing?

Vickery wants her to cancel Calhoun Day (which sounds a lot like something wherein people say Yankee–not the basball team– and wonder what life would be like if their grandparents hadn’t lost that particular war). Adora says nope and then threatens to have him fired. They both giggle a little and all my questions about whose the bottom in that relationship are answered.

Most Patient Person in Wind Gap

Gayla. Oh, I see you. Every day in that big ass plantation house actively not slaping the shit out of someone. You deserve all the awards. And a raise.

I felt that in my bones.

Runner Up: Most Patient Person in Wind Gap

Camille is sitting at the bar drinking when obviously underage John Keene comes in, orders a drink, and is served. Okay. He starts reminiscing about his sister, Natalie, and what she was like. Turns out she stabbed a girl in the eye with a pencil (because the girl stole the pencil and that was obviously a proportionate and well thought out reaction) back in Philly. He mentioned that she and Ann Nash were good friends and even though Bob Nash thought Natalie was a wild child and Ann was a good girl. They were always together even though they fought a lot. Luckily Amma was there to keep them from killing each other.

At that revelation, Cammile jumps up to find her sister because on her date with KC they agreed that whoever killed the two girls had been watching them play in the hunting shed and stalking them. So if Amma was up there playing with them too…

What hapened to Camille at the End Zone? Who is Camille’s dad? How old was Adora when she had Camille? What were Amma, Ann, and Natalie doing up there in the hunting shed? What does Jackie know that she isn’t telling anyone?

If you or someone you know struggles with self-harm or substance abuse, please seek help by contacting the Substance Abuse and Mental Health Services Administration (SAMHSA) at 1–800–662-HELP (4357). For additional resources visit www.hbo.com/sharp-objects/resources.

Need to refresh your memory? Check out our recaps of Sharp Objects here.