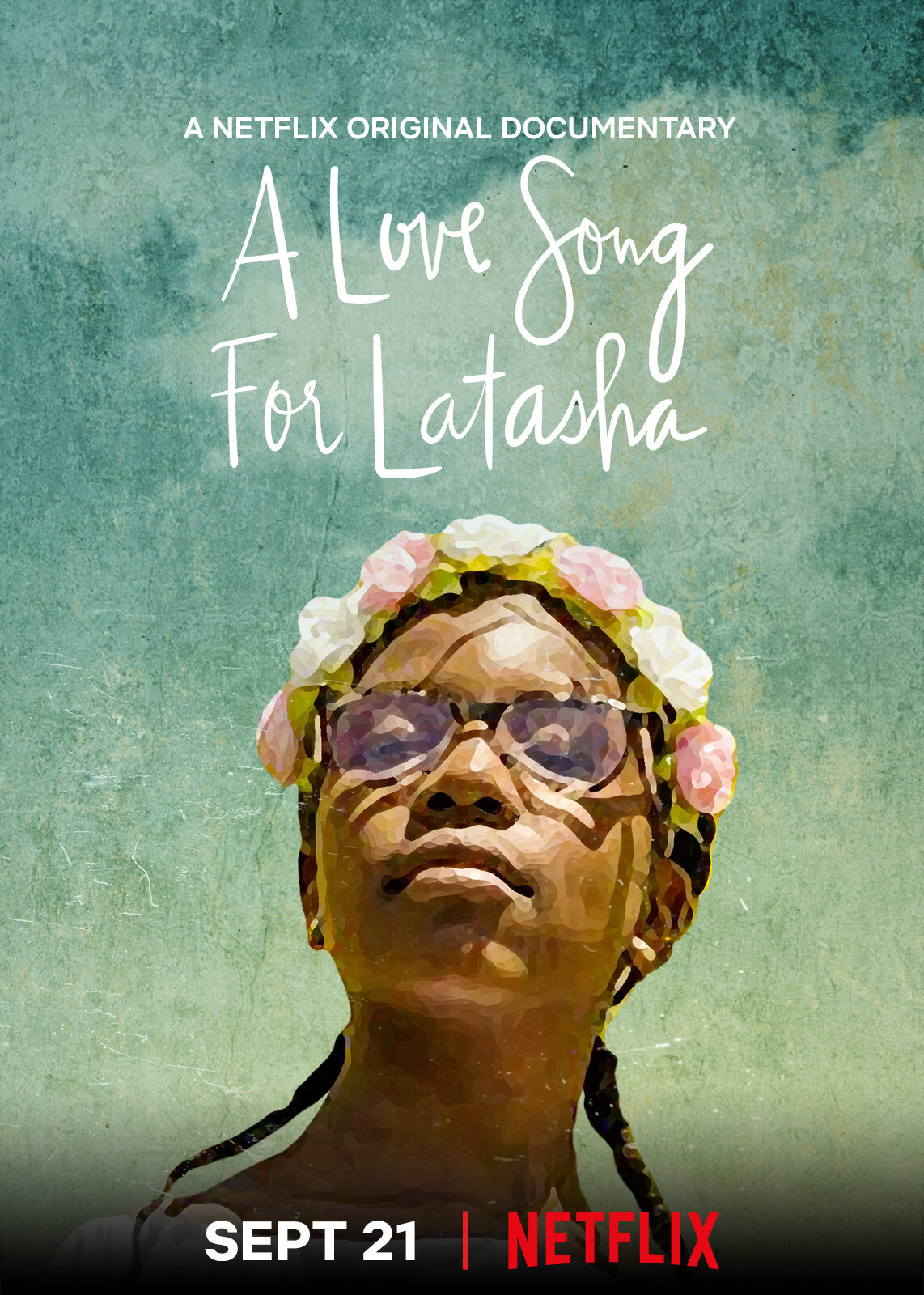 It is important to note that when I first started writing this review it was Tuesday, September 22, 2020. A Love Song For Latasha dropped on Netflix the day before on Monday.

That Tuesday I sat at my computer trying to place myself in some zen state to type up this review.

I remember checking my phone, popping in and out through four different apps regarding news of the upcoming decision of the Breonna Taylor case. For a point of reference, it was the day before the announcement of the results which brought no justice to Breonna and no statements of wrongdoings.

I am used to many things as a Black woman living in America; I am used to Black death, I am used to Black pain and I am used to injustices done to Black folks. I am used to this feeling of seeing Black girls and women dead, gone too soon, and the collective mourning we carry, like a purse or some sort of accessory. The following day, when the full announcement via the press conference was relayed to the public, I remember looking again at the nearly blank screen and feeling hollow. Just empty. I saved whatever writing I had, brief as it was, and went back to bed with my grief.

And I picked this review back up this week.

The City of Angels

There are some stories you hear about as an Angeleno, that stay with you forever.

In my written reaction to the trailer for the documentary film, I wrote that growing up in Los Angeles I often thought about the slain teen. I would look at the black and white photo that was more widely circulated of her and the proximity of this dead Black girl made me think about being Black in public spaces. It made me think about the value of Black life years before most of my classmates and peers outside my neighborhood and the folks I’d go to college with, would have to.

As a Black kid, you were told explicitly not to open a drink or a bag of chips in the store–even if you were in line, money in hand, ready to buy it. Even if the store’s owner knew you. Your mama. In fact, don’t even be fidgety. Don’t give them a “reason” to suspect you. As a Black child, you were shown that you are a suspect due to your skin color by simply entering a corner store and being followed by the shopkeeper.

“Store Policies” that demanded shoppers with backpacks leave them at the counter only applied to you and your friends. If you tried to voice a complaint, you were threatened with a call to the police which was another sort of violence you wanted to avoid. A lot of this stemmed from the climate of the uneasy Black and Korean relations in Los Angeles in the 90’s–and Latasha’s story served as a quietly talked about tragedy when I was growing up.

So many of us know who Latasha Harlins was only given the context of her death. To many people, that’s all they really know about her. Just a Black girl whose life was forfeit. Just a Black girl in South Central whose life seemed to be worth only $1.79. For so much of history, she’s not removed from the injustice of her life. Some even forget and history has glossed over that her murder became a flashpoint for the 1992 LA uprising that forever changed the city. She deserves to have information about her articulately presented and archived. She deserves to be remembered and that’s what director Sophia Nahli Allison and crew set out to do.

How to tell a story

The film opens with a voice over telling us that Latasha was a protector. A guardian figure of sorts in the neighborhood. Raised by her grandmother when her mother was killed, she helped look after her two siblings–she was dependable. She was present. She loved. She was a girl who commanded attention with a sort of grace when she intervened and stopped the bullying of a newer girl to the block and when she played basketball, not with the kids her age, but with the OGs of the area.

Weaving this dreamlike vision that combines the past with the future, the film tells us Latasha was in the words and memories of Ty and Shinese– her best friends. Shinese being her cousin–with both she and Ty as adult women share who they were as children, as teenagers knowing and living with Lastasha. There are moments of grief, of course, especially when recounting her death and the circumstances surrounding it. Yet there are also moments of sweet remembrance, moments of disbelief and yes, moments of laughter.

The film operates and looks like a documentary film in that the footage looks archival, with photos shown on screen, audio of the sounds of the neighborhood of the talking heads of Ty and Shinese, and reenactments and even animation that doesn’t distract from the emotional scene on the screen. The film also operates as an experience, a visual one. It feels like a short road trip where you’re not riding shotgun, you’re in the backseat hearing a story for the very first time. A story that has been told before, a story that is well-loved and well-worn around the edges but one you just haven’t heard before, and now you’re glad you have.

Every Choice is Deliberate

When I was in college, I took a documentary film class. What will forever stay with me, perhaps one of the most important truths about doc film is that every choice is deliberate. What photos, if any, are used? How might song and music choice emotionally charge up or cool down a scene? How is this person or issue or place framed in the context of the narrative? Every choice is intentional. There are many choices that I felt enhanced the film and its message like a certain Noname song and the footage of Black girls everywhere, on porches, eating fries at Tam’s and counting dollar bills.

Perhaps the best of these decisions, that is appreciated on my end as a viewer and someone who also wanted to know more about Latasha as a Black girl growing up in Los Angeles, was the decision to not include the death footage–the store footage of her death. Have I seen it before? Yes. Have many others? Yes. And that footage has defined Latasha for so long, it was worked to dehumanize her for so long. It has also traumatized people like her friends, like her family, like the folks in her neighborhood, like every Black girl who has had the misfortune of watching it, for so long.

At a recent (virtual) talk hosted by the California African American Museum, the director expressed a time for a change. Time for the narrative to change. Its time to aim to move past trauma and looking for a reinterpretation of Latasha’s story that remembers her and remembers her well. As someone loved. As someone worth flowers, not just tears. As the neighborhood big sister who looked after others who needed someone tall and someone who wouldn’t turn the other way when she saw someone in trouble. As someone who should have been able to get home, safe.

A Love Song for Latasha is a dreamy and loving tribute to Black girls everywhere, but especially the ones that are taken from us too soon. This doc film is a tribute especially for those who history tries to deem unimportant with inaccurate information. This film is for those Black girls that society falsely tells us are too insignificant to be remembered, that deserved their deaths somehow.

I often look to my favorite images throughout the film: of Black girls being unburdened, free from systemic racism, catcalling, and everything else that attempts to age them up in the way that the world wants in order to further dehumanize them. These Black girls look free of all of that–even just momentarily for a few seconds at a time as the camera rolls. There are Black girls walking through fields of flowers, sitting in empty classrooms, embracing each other.

In them, I see Latasha. In them, I see Latasha Lavon Harlins and Ty and Shinese whose stories matter and whose lives matter. And they always will matter. This is a daring film with a touch of magical realism that will take your heart, on a journey that will be a bit hard at times but worth hearing, receiving and knowing who this Black girl was and still is to the Black women who love her.

This film is worth watching because it imagines the life of a Black girl in the hands of someone who once was one. It is perhaps an even greater illustrative work when we consider happens when the stories of Black folks are told by Black folks with nuance and the ability to put us first. This film is worth watching because it demonstrates that the work of Black women continues in many different forms and that the lives of Black girls will always matter to us now and forever. Including Latasha.

A Love Song For Latasha is now available for viewing on Netflix.