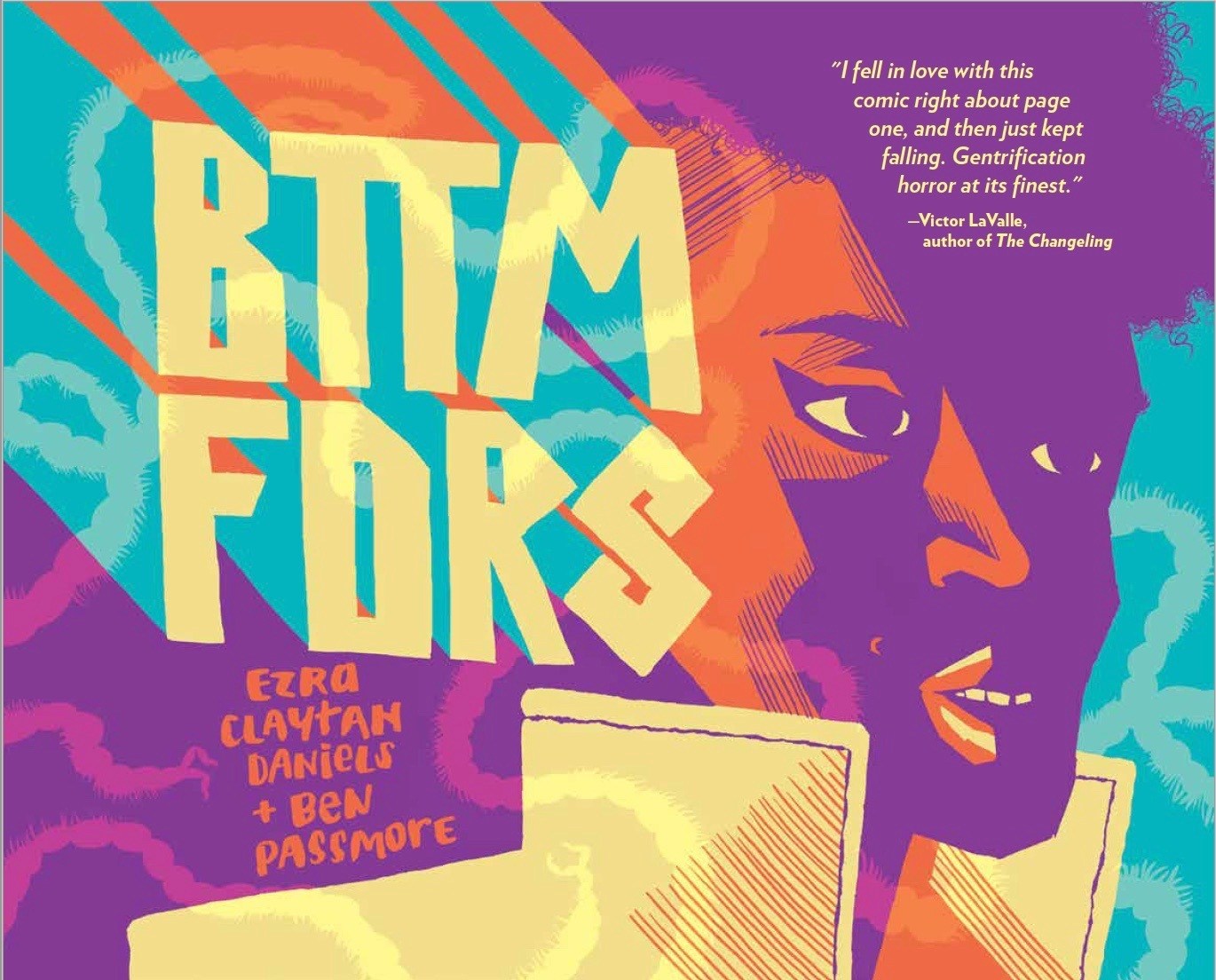 BTTM FDRS is a spot-on critique of the causality of urban gentrification. Packaged as a razor-sharp, pastel flavored fever dream, this book is scary, good, and scary good. Bttm Fdrs is the latest from multimedia dynamo Ezra Claytan Daniels whose last few entries The Changers and Upgrade Soul are already revered as modern classics in the genre. Paired up with Eisner award-winning indie comic creator and illustrator Ben Passmore, whose collection of race-savvy comics “Your Black Friend” are a gem unto themselves. Daniels and Passmore aren’t just writing about the issue at hand, they genuinely know what they’re talking about. Even the synopsis is a stroke of comprehension: “Once a thriving working-class neighborhood on Chicago’s south side, the ‘Bottomyards’ is now the definition of urban blight. When an aspiring fashion designer and her image-obsessed BFF descend upon the hood in search of cheap rent, they discover something far more seductive… and deadly.” The levity of this synopsis alone rivals the pretentious gravitas of several Steven King made for TV series trailers, it’s pitch perfect!

THERE GOES THE NEIGHBORHOOD

The title is a play on “bottom feeders”, the name given to a particular fictional neighborhood with very real parallels to that part of town. You know, the other side of the tracks. You really can’t put creators this woke (and this humble) on a project and not expect a fantastic product. For real. Instead of just talking about gentrification, Daniels and Passmore go the extra mile to build out a macrocosmic metaphor in the space of one building.

ME, YOU, YOUR MAMA & YOUR COUSIN TOO

The writing in BTTM FDRS is top-notch millennial ‘newspeak’. There is a blend of acerbic wit, apathy, and unearned wisdom in the dialogue that just drips of youthful realism. Mastery of that voice is key in understanding how to engage this topic. Comics have been a bastion for folks looking to talk about the ‘ways of the world’, even more recently with titles like Scarlet and Infidel, breaking down the -isms that plague society. What sets BTTM FDRS apart is the exactitude with which it analyzes the issues at hand: the racism that has distilled down to classism that leads to redlining designed to create property devaluation which leads to gentrification to prepare for displacement. In short, Daniels and Passmore point the blame where it’s due and that makes the book even more impactful because everyone plays a role. 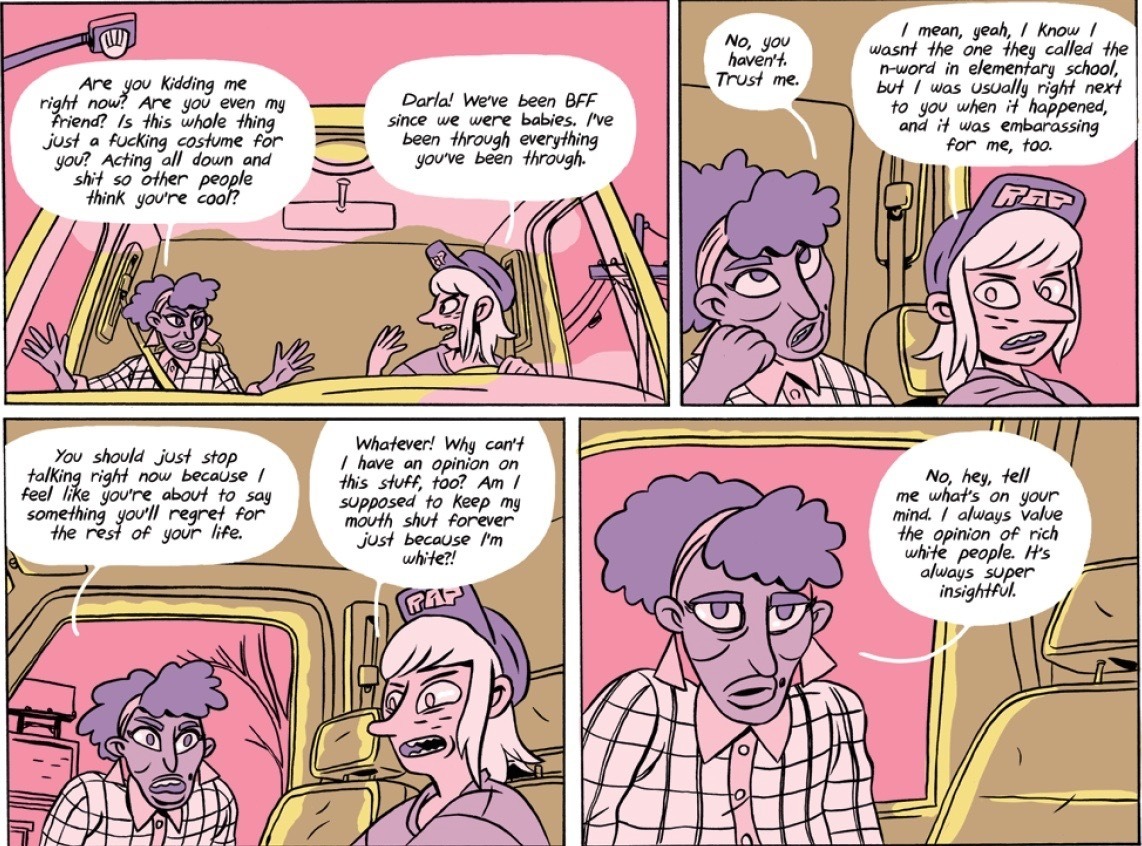 WHAT’S A GOON TO A GOBLIN

Horror elements are hard to execute in 2019. Especially when one views any of the thousands of bootleg, off-brand versions of popular horror franchises out there. Daniels and Passmore didn’t even choose one kind of element to lean on – they did them all. In two dimensions. In neon and pastels. Daniels and Passmore made this book in a cave, with a box of scraps!!! That said, BTTM FDRS handles the nightmare beats very well and does it in tandem with a level of intersectionality that would earn it blue check on any social media platform.

Suspense, horror, and intrigue are difficult to sustain in a comic without dynamic illustration. Passmore’s lively and deeply detailed cartoon style is a distraction; bright and a little surreal – the perfect camouflage for the dark and gory elements of BTTM FDRS. Let me tell you, it goes there. It begins with the use of extremes, a whole page shifts from green to full-bright yellow meant to signify the turning on of fluorescent lights. The simple use of pink and purple hues to indicate the coming of dusk. Seemingly beautiful and innocuous…Until boom! The toilet filled to the brim with innards splashes across the panels! Boom! A guy gets his whole body splattered to bits! 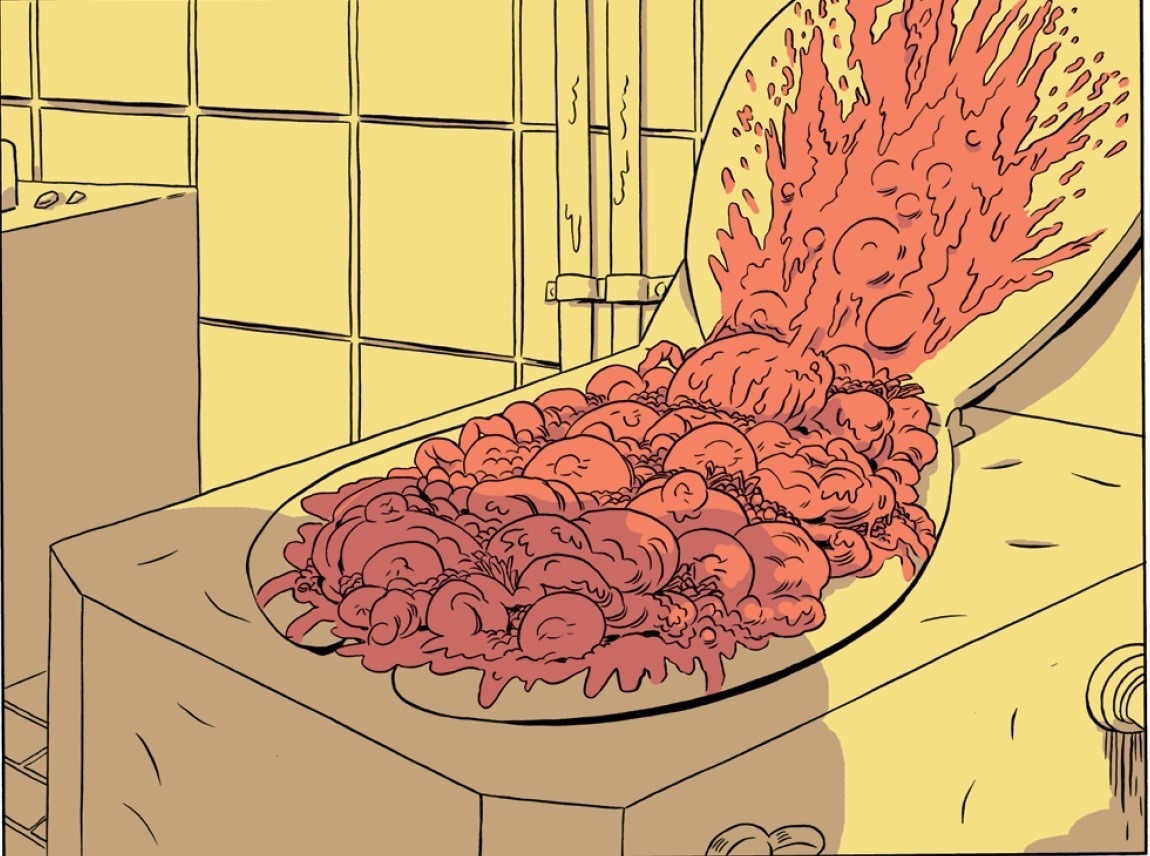 It sneaks up on you but Ben Passmore’s art is as sharp as writer’s wit. His attention to character-specific detail is alarming given how loose and flowing the illustrations are. In reality, Passmore’s style is as subversive as ever: he gives the details needed to make the point he wants to make. He truly commands a style that never ceases to amaze, surprise, stun, gross-out or outright terrify. While the lettering isn’t distinct, there’s a lot of text (dope dialogue by Daniels). Extra props go to Passmore’s keen eye to design panels that retain the proportion of the action while keeping all the humor attached. 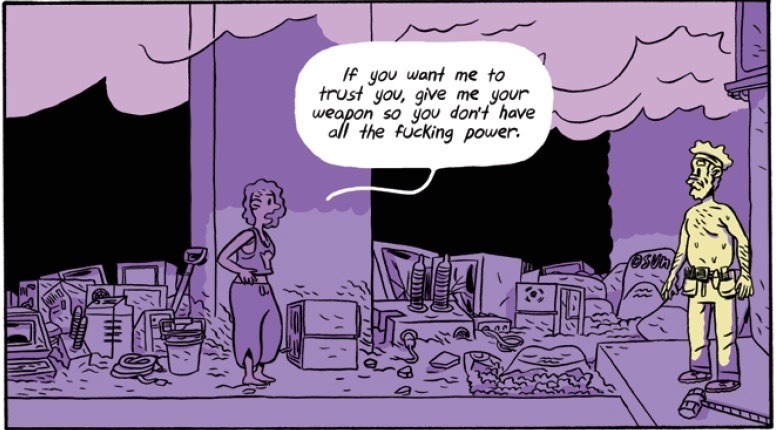 We finally got to meet famous author and #BTTMFDRS blurber @victorlavalle in New York! pic.twitter.com/PvZgwd4RNP