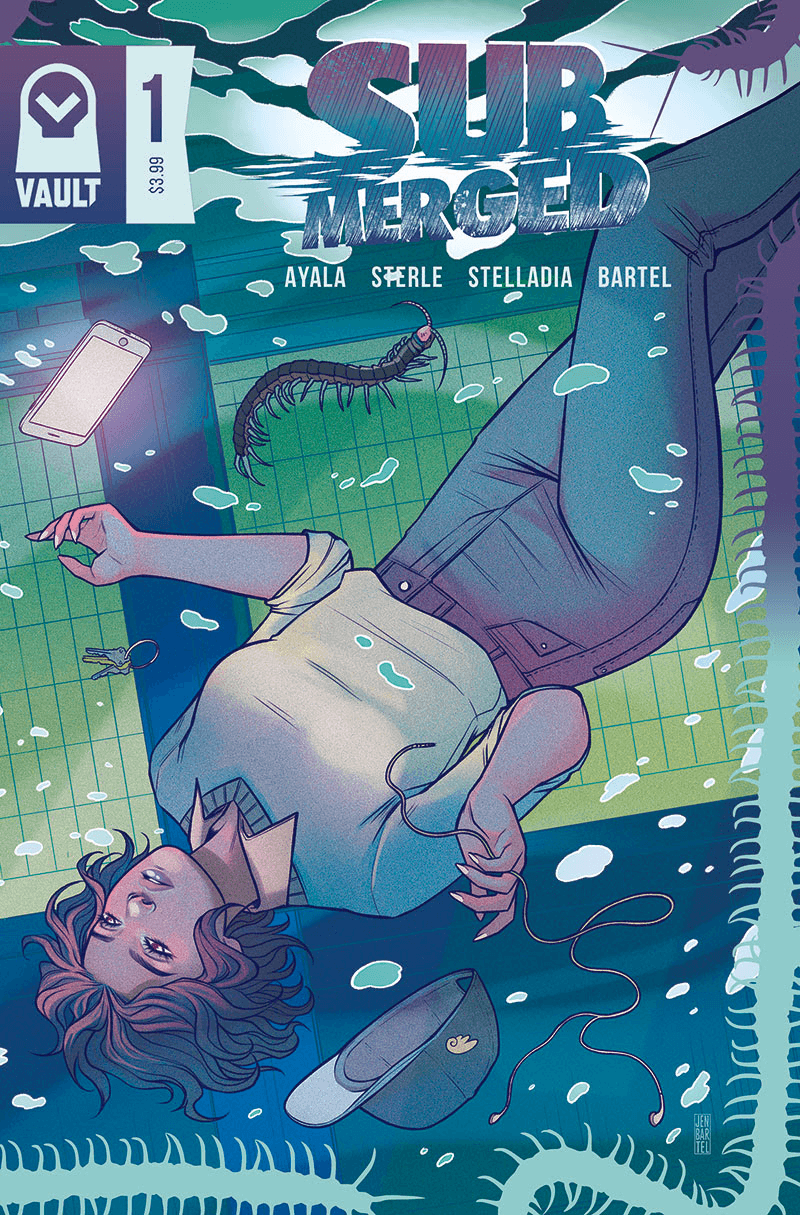 Secure the bag because I love it when a plan comes together.

I also love it when a creative team for a comic brings me something fresh to fangirl about.

Submerged, a new comic from one of our favorite comics publishers put together by some of my favorite folks in comics including writer Vita Ayala who pens The Wilds, artist Lisa Sterle (who illustrates Long Lost) and Stelladia, a colorist who has done work on the latest issue of The Wilds. Add Rachel Derring who is a notable letterer in the comics industry.

“A Queer & Brown contemporary retelling of the Orpheus/Eurydice myth set in the NYC subway.”-Vita Ayala

Elysia Puente is just trying to get home on a night where the weather is getting ready to show its own entire ass. A big storm is on its way there, perhaps the biggest in such a long time and she just wants to get home to possibly Netflix and chill solo dolo. She’s a popular person because her phone keeps blowing up and she learns of a voicemail from her always-in-trouble little brother Angel that she’d rather not even get into tonight.

But he’s got bad news.

He’s in big trouble. BIG TROUBLE. Somebodies are out looking for him and he’s sure he’s messed up REAL BAD. So off El goes into the night, into the crappy weather and into the subways looking for the lost soul that is her kid brother as she finds she is hot on his tracks. Elysia has no idea wants she’s getting into, truly. She’s desperate, that makes he knows. The longer and longer this night carries on, the stranger thing gets and she’s just trying to right a wrong and do what shed always done: save her brother. 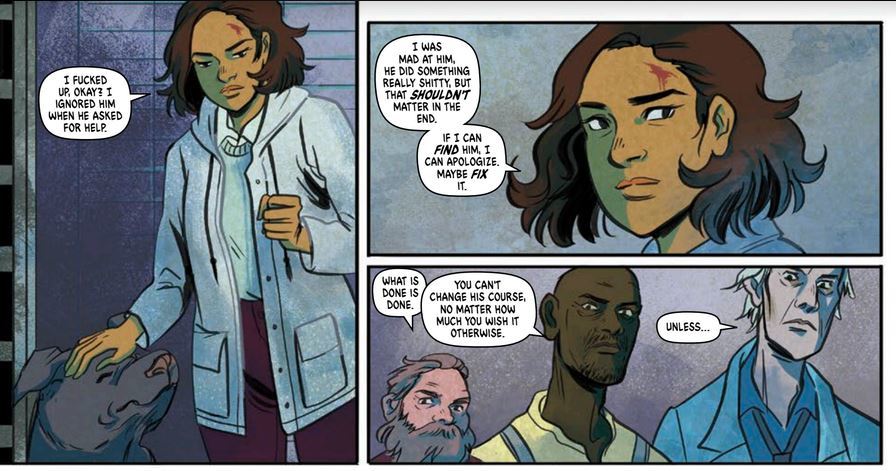 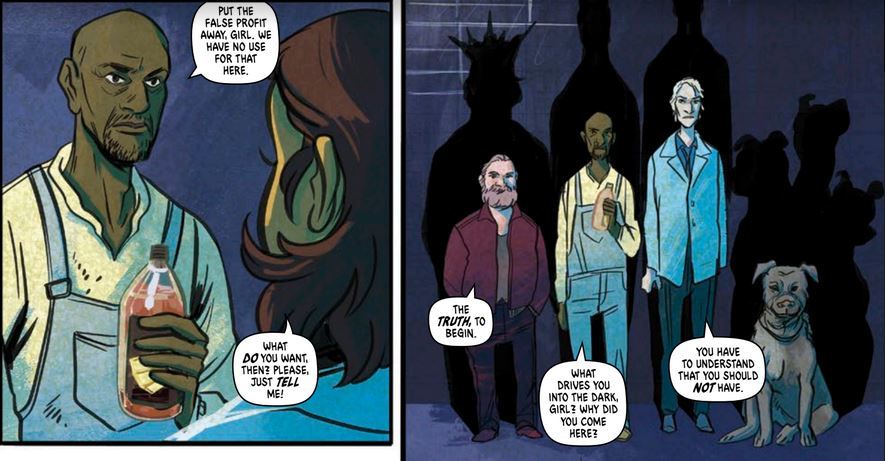 Initially, I had worried how accessible this comic book be in the set up of the narrative as I’m not super knowledgeable of Greek mythology outside of the little I remember learning about in school but I was fine. While the first issue is just the first toe into the pool of what’s to come, writer Ayala grounds us in establishing who El is: a young woman who is tired.

A person who is comfortable with creating distance with others. A girl who grew up into adulthood spurned on the complicated relationship of being held accountable for a brother who was raised with way less responsibilities than she ever had. The flashbacks help immensely in retelling El and Angel’s lives from mere children to young adults to start to flesh out who these two are and help explain, in the way of exposition, why Elysia is so determined to get to Angel. 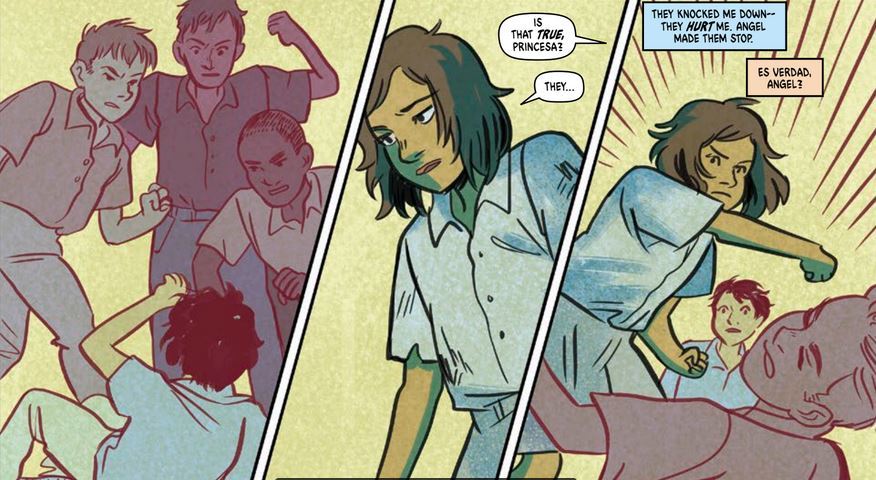 I’m here for Sterle who is the artist for Submerged, knocking it out the park like I know her to do always. You may think subways among other places must always look drab and places devoid of personality, but Sterle adds just enough detail to make it all enticing and aide in following along.

Along with characters, I like the tiny details like the coins offered to El by the men in the subways/muses?, their shadows, even the little (Card Captor Sakura influence?) wing design on Angel’s hat that El takes with her finding it abandoned. I’d be re-missed if I didn’t add that she nails illustrating the creepy, the things that go bump in the night, the monstrous as I’ve known her to do with her time as artist for Long Lost.

I really have to handle it to Stelladia whose coloring skills only add to the unique atmosphere and mood for this book. The blues are an ever-present theme color wise, sure there is a storm coming, sure she’s headed into a dark and dank subway, sure El has her emotions bottled up inside worry being the only that bubbles up first. I especially appreciate the yellowed gaze of the flashbacks that aptly set apart present day from the past. I gotta give a shout out to Deering, as letterer who helps bring this entire visual project together.

Submerged #1 is a long time coming. Leslie and Morgan took a look at this first issue before I did and we were all in agreement, once I read it that it is something special. Something worth picking up. Most definitely a comic worth reading and sharing about.

I want more brown and queer stories. I want more women and non-binary folks on creative teams together in the comics industry. I want more comics featuring female protagonists. I want it all! Submerged #1 is a strong first issue that is an intriguing page-turner with more to look forward.