Season 2/ Episode 6/ The CW
And you say National City all over CW!

[dropcap1]I[/dropcap1]f you live in New York, you know why this Recap is late. My bad to the rest of the country.

Supergirl fans, I hope you’re ready for this one!! CW pulled out all the stops for an action packed, emotional struggle of an episode. I’m talkin bout, these writers pulled source material from John Carpenter’s The Thing, Game of Thrones, Captain America and Blue is the Warmest Color (find it on Netflix if you haven’t seen), then balled all that up into a heart string tuggin, Sci Fi infused episode they had to drop on a Saturday night cuz it was too dam hot to keep under wraps (actually NY got deaded on this episode until Saturday..cuz NFL > Errythang) They waste no time picking up where Alex left herself off. Confused, anxious and scared out of her fractured psychi. Her and Kara go for a stroll alongside a beautiful body of water. There’s mommas walking newborns, guys walking dogs, kites being flown overhead, it was like a scene out of a dystopian world of 24 karat rainbows and Beverly Hills privilege. So that’s our setting for Alex’s big reveal. She tells Kara she has feelings for Detective Mollie and Kara has the dam nerve to respond with, “It sounds like you’re coming out to me.” Really KARA?! That’s the first thing you say to your sister after she pours her heat out to you?? Not, I’m here for you girl? Not, a joke to lighten the mood? Just confused clarification. Maaaaannnnn I was ready to jump through the screen and drop Kara with a severe Leaf Hurricane! Of course Alex don’t feel supported one bit so she runs off to contemplate life in this ever-shifting world.

On the frozen side of the world, a Norwegian research team discovered a canine of a super rare breed that’s been frozen in the tundra for 5,000 years..but is still fresh fleshed. Doctor Rudy Jones begins to dissect and investigate the undead wolf beast..and by investigate, I mean dude sticks his entire hand inside this creature and of course this guy starts to convulse as his body gets overtaken by this thing..no pun intended. Camera cuts away and all we hear is blood curdling screams. Alien Stonewall Inn:
Kara continues to push her “become a hero” agenda and Mon El let’s her know, he’s good. He picked up a gig as an enforcer, beating the plasma snot out of aliens who forget to pay their alien mob debts. Kara’s disgusted with his code of work..so much so, that she accepts his offer of a drink that would kill an Earthling but just gets aliens like them tore up from the floor up! Kara pounds her drink then the team calls them in to debrief the Arctic research facility situation. An SOS was sent out and all we get is a video of a woman screaming “It’s not human!!” into the camera as mayhem ensues behind her. Supergirl and the team fly out to the facility but Kara passes out like the drunk uncle at Thanksgiving and Alex, Hank, and the DEO take the jet out for a spin to the 0 Kelvin zone.

Sub-Zero’s Lair:
The lab is destroyed with only one survivor. They rescue him and bring him back to the DEO for observations. He’s soon let go because he says he needs to finish his research and seems to be the lucky soul who made it out the Arctic unscathed..cuz sole survivors are never suspicious on superhero shows. The girls find out how real my sarcasm is when Winn hacks into the lab’s security footage and witness Dr. Rudy Jones suck the life out of everyone. They move out with the quickness and find the National City lab that Dr. Jones was supposed to be at, but instead find a dude who’s dead as all mummified hell. They run into the parasitic villain and Alex immediately opens fire, but homie clearly been training with Clark cuz them bullets bounce right off his chest and Supergirl does a whole lot of nothing besides getting herself drained by Dr. Parasite.

DEO: James storms in to find Winn and demand that he receive the suit that Winn’s been working on. Too bad Winn ain’t having that shit. He knows that James would catch the RIPs if he goes out there with an unfinished suit, so he makes him wait.

Dem Streetz:
Dr. Rudy Parasite is back on the prowl so Supergirl and J’onn J’onzz get ready to do their Jordan and Stockton thang and I’m gettin hypeeee! These two rarely get to flex on this show, and when they do it usually means beddy bye time for out villain of the week. BUT GUESS WHAT?? Dr. Rudy Parasite ain’t wit none of that noise! This dude out here performing 720 windmill backboard shattering through the legs tomahawk slams on our heroes! He gives Supergirl and J’onn the GreyWorm and Ser Barristan bodied by the Sons of the Harpy in the alleyway treatment. They had their life force sucked damn near dry, turning them into husks of their former selves and this cat Dr. Parasite went from Geico Gecko Nerdlucks to Godzilla Monstar status and went on a rampage.

The city’s leading experts on tossin’ DEM HANDS are out for the count, so who can the city turn to?! Oh you got that right. The triple threat squad of Winn, Mon-El, and fresh out the suit factory, Guardian. James and Winn gave a pretty dope little nod to us fans when they dropped the Super Friends line then rolled out to stop some evil doing.

I’m not gonna lie, Guardian and Winn was out here looking like Black Panther and Tony Stark in the streets! Also can’t lie about how trash compacter garbage Mon-El was out here looking with his zero hours of training and experience. Dude was flailing around like a Magikarp vs Gyarados fight. And booooyyyyyyy oh boy, I was expecting Guardian’s suit to be butt ugly but my son came out here lookin’ like a chrome plated War Machine with a shield that seems second to none… well, besides the Captain himself. That shield put in that work too. Guardian was out here defending like a platinum plated Broncos Superbowl win. Guardian rolled up with the Sprewells spinnin’! He was wheelin’ and dealin’! Dishin’ n swishin’! Stylin’ and profilin’! And Winn the Mugsy Bowes ass glory hobbit himself is in the van putting up Phil Jackson ring numbers on the board!! They force Dr. Rudy Parasite to take off which buys the Super team just enough time to get back into the game. 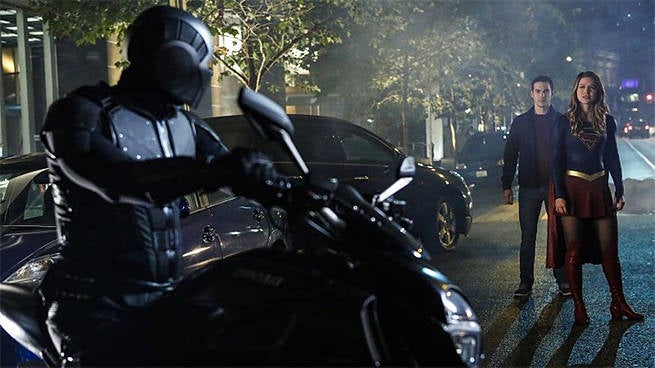 Martian Bloodhunter
DEO: The team wasn’t too worried about Supergirl, but J’onn was a whole nother story. Shit was looking grim… I’m talkin’ King Robert after the boar attack fatal, so they got M’gann to come donate some blood to the homie and whispers that’s she’s sorry for doing that..cuz, you know, she’s a white Martian and not a green one, which means he’s probably going to die or have some mean ass side effects. Supergirl wakes up and goes back on the offensive. Supergirl hears that Mon-El stopped acting like a dick and put his ass on the line so she insists on going to help and somehow she figure out that if the parasite is absorbing all this energy that there must be a way to overload his system…cuz of the premonition she had while in her husk coma? Let’s just chalk it up to her getting her finally being able to science the shit out of their predicament. She stops by the power plant to pick up some plutonium and heads into battle.

Supergirl tracks his giant troll in the face ass down and baits him into attacking. It works and his big dumb environment hating self is disintegrated thanks to the plutonium 239 overload…even though that plan could’ve easily backfired and caused a Kaiju level beast to be unleashed on the city. Kara and Alex have another conversation because Kaya realizes she was kind of a shitty friend and sister when Alex came out to her. Kara also realizes she has been hogging all the emotional spotlight with her gargantuan secret, and never created an environment where Alex could reveal big secrets and come to terms with who she really is. Is was a very mature moment for Kara and solidifies this episode as one of the best written stories they’ve ever had on the show. The LGBTQ community is hyped off this storyline, and for good reason.

Mon-El gives us the cliffhanger we’ve been waiting for as he gets that ass kidnapped by CADMUS and Lana Luther’s mom dukes. One beef I have with this? How da fuq they set up that homeless dude to help kidnap him? CADMUS is weak as hell man.

Anybody ears perk up when you heard that Supergirl and Martian Manhunter were turned into husks?? Flash connection anyone?

They’re definitely beginning to tease this 4 show crossover event with that husk line and then that SUPER FRIENDS line. So great.

Mon-El might’ve been super trash when fighting Dr. Parasite, but at least he saved that little girl who was about to be crushed by a car. And what exactly was that child doing standing there with her hand out bout to cast a Patronus Charm? Come on writers, you better than that.

I’m glad we didn’t get a cookie cutter coming out episode where the girl gets the girl and everybody fully understands. This golden age of television is about authenticity and relatability. We all know relationships end badly as often as not. Woke ones know coming out is insanely hard and even harder when you want to admit feelings for someone of the same gender RIGHT AFTER you became comfortable with your own orientation. Alex went in for the end of the episode kill with that kiss and was shot DOWNN because Maggie isn’t interested in dating someone who’s so new to the queer lifestyle. It was rough, but it was real. Good work, CW.