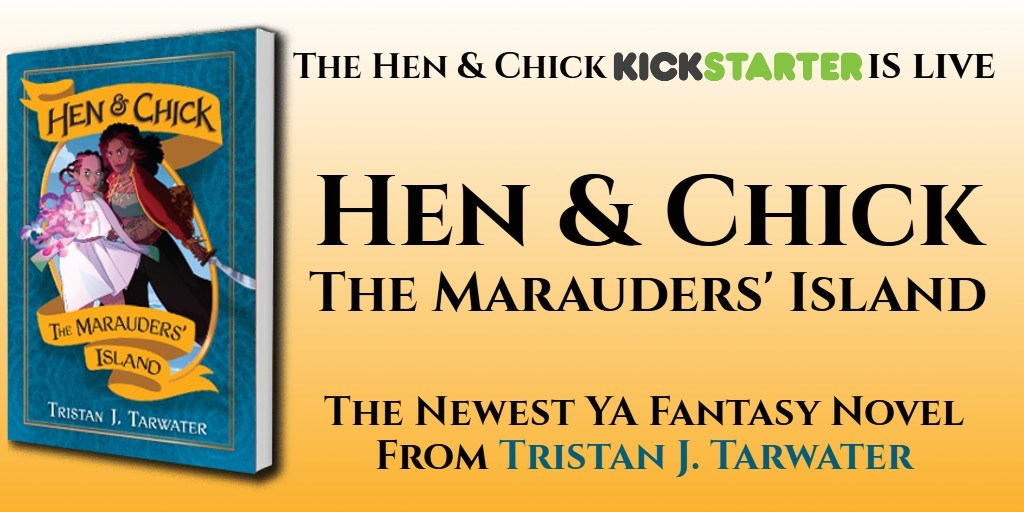 Truthfully, BNP is no stranger to writer Tristan J. Tarwater and her body of work, which includes comics, fiction, and other written bits (see this gem of a short story for example). Fun fact: I first stumbled upon her work on Twitter two years ago when she was tweeting about her Kickstarter campaign then to fund a print run of her comic book, Shamsee: A Fistful of Lunars. Since then she’s kept writing, creating and adding great commentary as a woman of color in an industry that is sadly not always safe nor easy to navigate if you aren’t a cis-gender white male.

Which brings me to the project that she’s currently campaigning to have funded: A print run of her fantasy series Hen & Chick. The novel has been delivered to subscribers on a monthly basis and has been available for purchase on several different platforms. We’ve covered it here on the site before. The Hen & Chick Kickstarter campaign would supply the funds to have the chapters collected, edited, and printed in both hard and soft cover editions, along with a few other fun goodies.

Hen & Chick is the story of one young woman, Azria, who has been training most of her life to be a mage with a feeling in her gut that she’s made for something more, something bigger than the island that she’s grown up on. Each month that I’ve received a new chapter I’ve found a multi-layered story: not only is it a coming-of-age tale, I’ve found it to be a story of a young woman reconciling with her mother and choosing what path ahead is for her. There’s blood spilled. There’s treasure and secrets. There’s an eccentric crew that’s totally squad-worthy, with each crew member complete with plenty of backstories. There are family ties and vague connections. There’s magic as old as the seas the characters travel upon. Needless to say, I love it.

Tarwater describes the collected Hen & Chick: The Marauders’ Island book as
“a swashbuckling fantasy story, where a wizard of immense talent and legacy must find her own place in the World of Mun. The power to control the elements is trumped by long grudges, old lies, and personal desires. Magic is for the bold, and surviving the ambitions of the powerful isn’t for the faint of heart.” 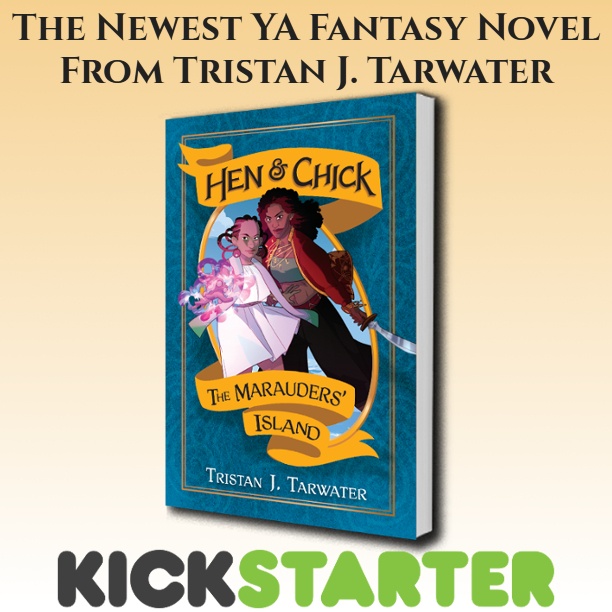 Over the last few years, an incredible movement to bring attention to the lack of diversity in publishing has grown, using social media and personal connections to drive home the importance of supporting the artists we want to see in the world. (One significant hashtag that hasn’t lost it’s power is #WeNeedDiverseBooks. Give it a look for recommendations and information.) It is only recently that creators have had so much access to audiences through the internet, allowing them to achieve success with self-publishing through different platforms like Kickstarter and Indiegogo.  And as much as we preach it, we must support the creators, authors, artists, and other folks involved in the creative process. If I can quote the author herself, Tristan J. Tarwater says:

I didn’t want to do another fantasy story full of European backdrops and orphans.

What better goal is there to support than that? Let’s make sure that that this impressive young adult fantasy adventure offering gets the backing it needs from people who believe in making fiction by people of color with fantastic stories to tell accessible. Hen & Chick is something you surely will want to read again and again.

Find your way to the Kickstarter page to see more about this project, the author, and all the great perks you can receive at each pledging tier: from digital copies of the book to soft and hard copies to coloring pages, enamel pins, and even a couple of ambitious stretch goals! Join me and a crew of other folks ready for our fill of swords and sorcery as we depart for a new adventure crafted by Tarwater completed, edited, and ready to be printed.

Successful funding of this project will also mean a better projection of the next story arc of Azria’s adventures as Tarwater plans to continue the story into book two, using the same unique monthly subscription service they have set up and used for the first book — if you want first access now’s the time to check it all out! For all those on the fence unsure or for those who are simply curious: the first chapter is available for free here.

Editor’s Note: This Kickstarter announcement was first published on May 5, 2016. The interview, since then has been updated and now includes the writer’s newer pronouns that they prefer and answer to: they/them. All Kickstarter campaigns mentioned have long finished their days of seeking funding and Tarwater’s Patreon is currently not active. See more of Tarwater online of their website where a complete listing of their work is linked for purchase and find them on Twitter. They contributed to several projects since this interview wrapped up like penning comics about Harriet Tubman featured on The Nib.