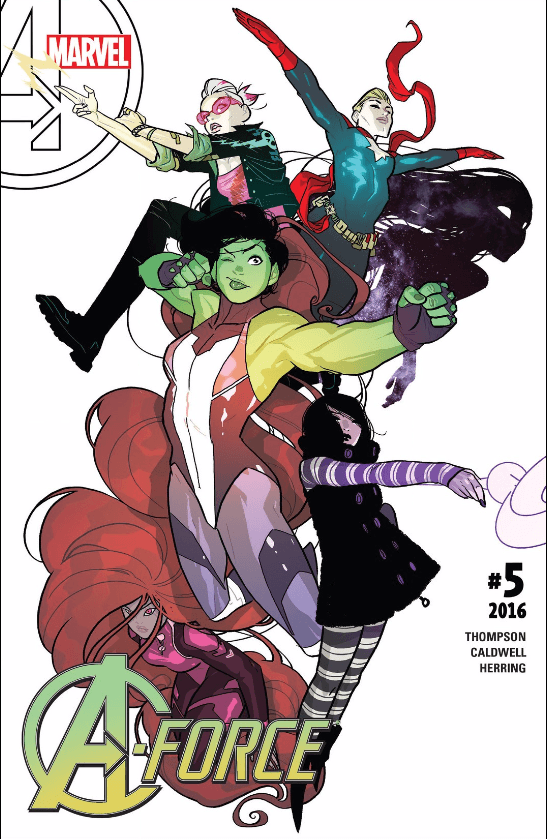 Here in Issue 5, of the many things we learn, the most important is that the events and people of BattleWorld will not stay in their own dimension. Singularity isn’t the only person to have transferred from that reality to this one. It appears we have a THOR! Recall from Secret Wars that the Thors were the police force for God Doom. In that comic, each of the Thors had the body, appearance, and personality of some other hero or villain from one of the other universes. When informed of all of this, our A-Force team is of divided opinions about it. 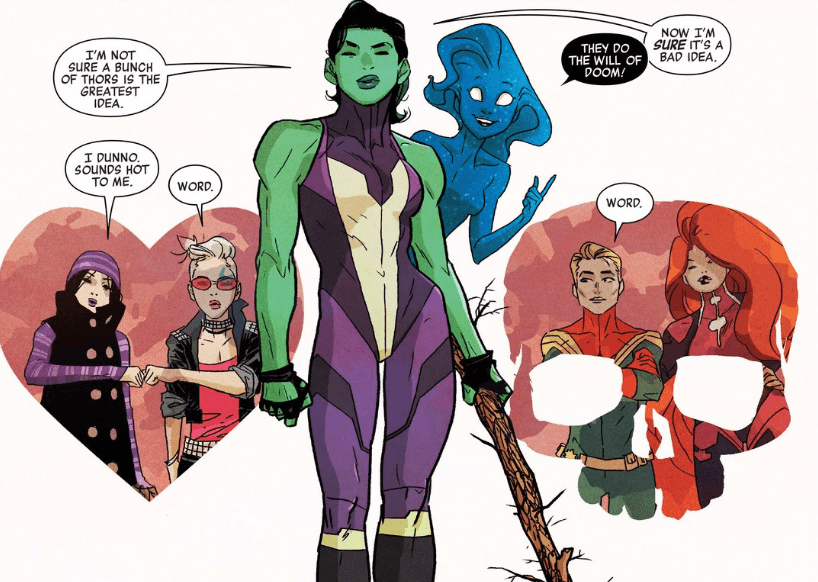 For the record, that panel is my favorite one of the comic, hands down. The heart and the skull with She-Hulk and Singularity in between? Come on, now. It is clear that Caldwell and Herring did not come to mess around.

So which Thor do we ge? We get Dazzler Thor. Which is one of those phrases that I as a comic reviewer couldn’t ever have imagined writing, but which feels so good to see and say. Dazzler Thor. Because really, Dazzler has a little bit of Thor’s self-righteousness and Thor has a lot of Dazzler’s love of joy and life, so they’ve been destined to be together, in some twisted alternative reality BattleWorld kind of way.

And what is Dazzler Thor doing on the Oregon coast? Fighting a dragon she calls The Countess, of course. The team and Dazzler Thor knock The Countess back into her own dimension in a watercolor version of a forest that is so magical that it looks like it could actually house a dragon. The art style is a big change from Molina and Milla’s ’s bold colors and deep shadows, but it works, with the art team bringing a new color palette and keeping the focus on facial expressions.

Caldwell and Herring aren’t afraid to draw their women with muscles and strong chins, broad smiles and shaved hair styles. This is exactly the kind of variety of female characters that women have been looking for in comics — now if only we could get some racial and ethnic diversity on the team that’d be you know, ideal.

As expected, Thompson delivers the characterization and female relationships that you’re looking for, drawing the team closer together even as they reveal all the secrets they’re keeping from each other. This is a fun read that doesn’t disappoint. You’d be hard pressed to find a better comic for your money. I recommend you get in on this before the plot gets any deeper, you don’t want to miss out.

Speaking of missing out: Did you miss an issue? Read all of our A-Force reviews here, so you’ll always be ready for the next issue.