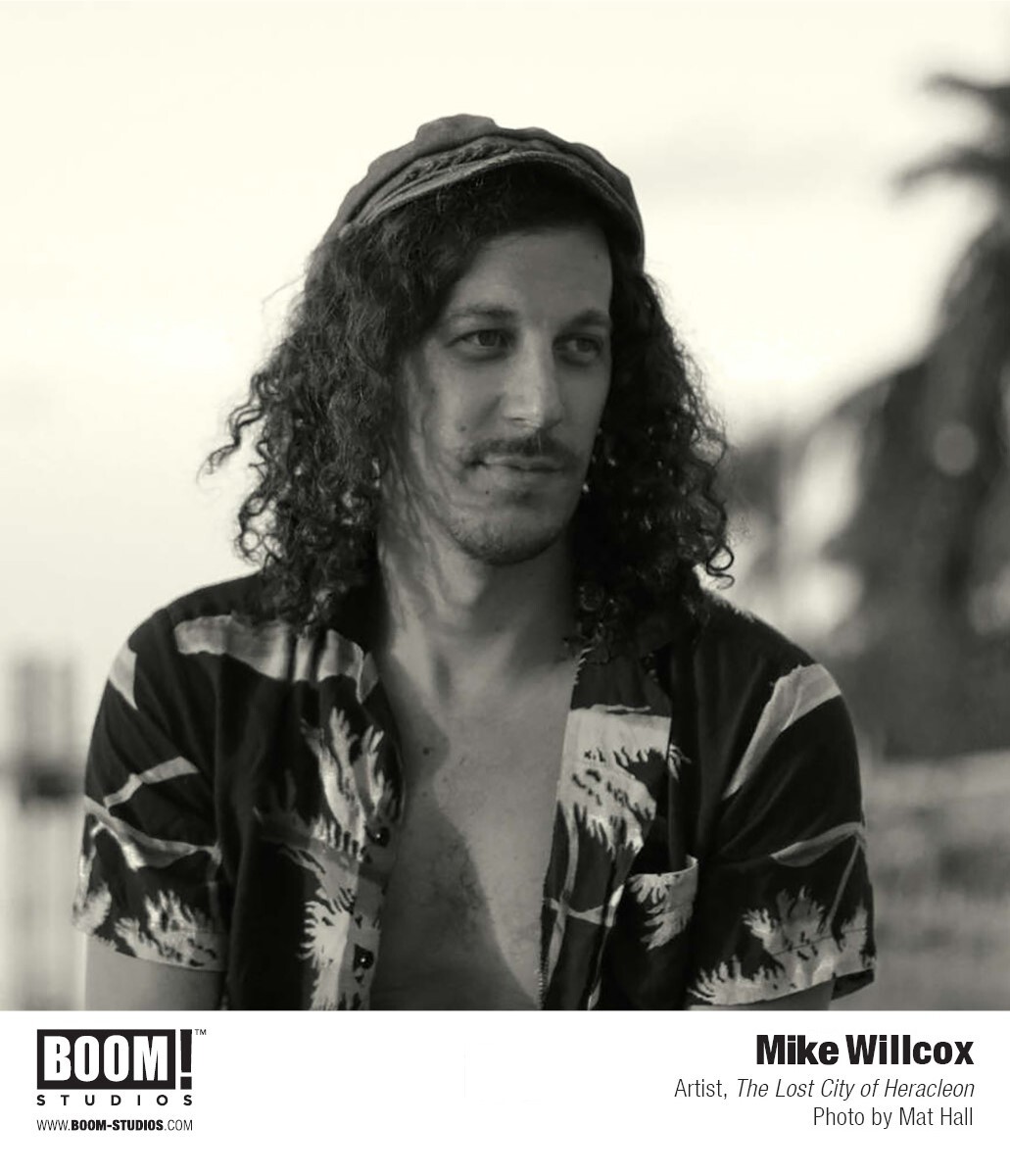 Last week, you might have seen our advance review of BOOM! Studios’ graphic novel, The Lost City of Heracleon. Well, this week, we are happy to say that we got a chance to interview with both the writer, Bruce Livingstone, and artist, Mike Willcox. Be sure to read both ahead of the release on August 29th.

BNP: From a visual standpoint, The Lost City of Heracleon is so visually distinct in how it tells the story of Lou and Shiro. Can you walk us through your own artistic background and the tools you utilized to make these beautiful spreads?

I am self-taught but have learned a lot of classical techniques from friends and mentors over the years. I teach myself through books and other resources. I used to be much more involved in realism painting, but pen and ink has always been part of what I do. I ended up doing a lot of concert posters and that sort of led me down a road to this style of working. I would make pen and ink drawings and then layer behind them with the same principles as Japanese woodblock printing. Which is a very similar process to making comics the old-fashioned way.

So for this project, I started with Hot Pressed watercolor paper, I wanted the book to be a specific size, so I would measure out the dimensions and bleed area and draw that in prior to doing my pages for the week. I would pencil in the artwork, then ink it, then photograph it and put it into photoshop. Then I would layer in colors behind the ink drawings and send Bruce my work every week. I think we made one change the whole book, so it was the best working relationship I had ever experienced. I did everything with Micron liners and Kuretake brush pens. I love working this way because of its efficiency, and I can still do everything by hand on paper.

BNP: What was the process like getting Bruce’s scripts and then crafting the pages?

Mike: Bruce had written this very rich and descriptive manuscript. My plan was to draft a storyboard, and then do 4/5 pages a week. So as I read through the script, I roughed out the images that came to mind and planned out each page with panels and dialogue. It came quite easily the way Bruce had written the story. I then took out a lot of his descriptive writing and let that guide the artwork and left in the dialogue and narration. I have no background in comics, so I took a more cinematic approach in my mind and did my best to make it really easy and fun to read through.

BNP: Between illustration, coloring, lettering, fine detail work of things like keyboards and other mechanical objects, and the more fantastical elements that get introduced as the story progresses: what took the longest? What got easier over time?

Mike: Actually, making the little devices like the face of the watch, for example, was really fun for me and I spent a lot of extra time designing those things to be new designs. Making up things that you have freedom with is always fun, like jetpacks and animal bones that don’t exist. The character drawing got easier over time as I got more and more familiar with the characters faces and anatomy. I went back at the end and fixed some things from the beginning to keep more continuity in the artwork.

BNP: What type of research did you do/what references did you use while illustrating the story and did any of your discoveries make you or Bruce adjust course?

Mike: That’s the most fun thing about making artwork for me is all the research and things I learn. I’m already a big history buff on Ancient Greece and the Early 20th Century, so I was really happy to dive into those things. My grandfather worked on submarines and built the periscopes in WW2 so that was fulfilling to learn more about. I got a few books on Greek and Egyptian architecture that I studied pretty thoroughly and then I would research period pieces for specific things like submarine doors and things like that, but still would allow myself liberties to be creative in service of the story. Some things in Sarajevo, like the car and the city, we kept pretty accurate. Nothing we found really moved the story in any new direction. We had initially stopped the book at chapter 7 where they make it to the city, but then we were encouraged by the publisher to continue on and Bruce wrote a wonderful second half of the story, where I got to get into some really cool stuff.

Also I only looked at 1950’s comics prior to working on the book and nothing else. And in preparation for the work I used the same anatomy type studying that those guys would have done. Continuing to study anatomy is important when you are making things up from scratch.

BNP: What do you hope readers will get out of experiencing seeing your illustrations?

Mike: I haven’t really thought about that… I suppose I hope they feel excited and inspired in some way.

BNP: Between the two principal characters, Lou and Shiro, which one do you relate more with?

Mike: I feel like I relate more to Hector and Bruce would be Syd and we are both Shorty. But between those two maybe Shiro since he’s a joker.

BNP: What piece of media do you wish more people knew about? (Not necessarily your favorite, but a book/comic/TV show/etc. That you think deserves more shine).

Mike: Joe Versus the Volcano with Tom Hanks.

BNP: Anything you want to share with your audience at Black Nerd Problems.

Mike: Since completing the book Bruce and I developed a tropical comedy cartoon, called Flip Flops together that we are working on getting made.