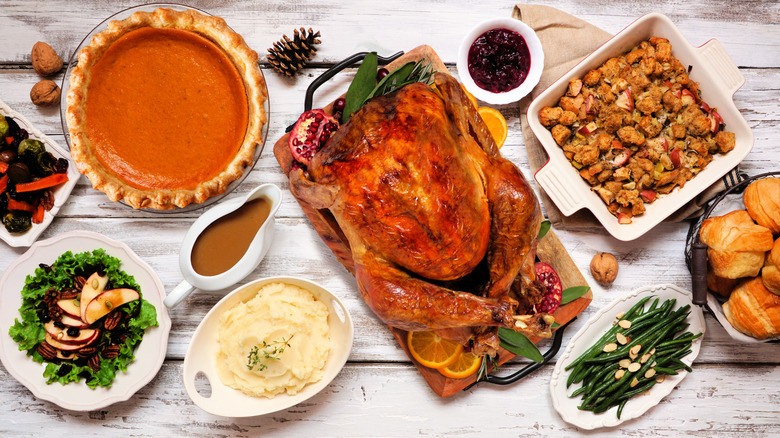 I reveled in their proclamations “Eh eh?!” My mother knows I just alley-ooped her when I came down with the stairs with a platter. Eight apple roses, fresh from the oven, one for each guest. The looks started when I presented my family apple roses for Mother’s Day dinner. A flashy, light, dessert with beams of red, and a scent that lit up the room. Cardamom, cinnamon, nutmeg, the aunties went wild.

Bring out the Starting Lineup

First, we have the specialists; those are the aunties designated to the potato salad, or the person designated one dish and it’s the same dish each year. The heavy hitters, those that handle the entrees and can serve as back up on the sides if there aren’t enough reinforcements from the specialists. The ranged fighters; those on desserts. They aren’t appreciated as much as they should be, but their sacrifices are well documented by the children. And finally, we have the healers, the blessed ones on the drinks. A couple sips rejuvenates the crowd for seconds. Not every thanksgiving committee got a healer. Sometimes there are committee members who do this reluctantly or as an afterthought, but a well-crafted drink will get the spades/dominoes table hollering within minutes. The tryouts to get on the “sides and entrees” committee happens all year round. You will know when you get the call.

I need to plan out my method of attack. What am I aiming for? Heavy hitters show versatility. Specialists improve their dishes or got a solid recipe the family doesn’t stray from. I want to be realistic, I don’t have the appeal of a long-range fighter. I am notoriously anti-cake. And I watched enough cooking competitions to understand if you have never done something this intricate before, if you’re doing it now, when the pressure is at 9,000?! You’re asking for trouble.

Prepping the Thanksgiving line up feels reminiscent to the MasterChef team challenges. Contestants are split into reluctant teams of two and are placed in a pressure service. The contestants are sometimes asked to serve first responders, owners of famous restaurants, anything that would feel embarrassing to mess up. For the lineup, we have team leaders, wanna-be team leaders, the consistent support, and the chefs that fall behind. A notable heavy hitter that was frustrating to watch was Subha Ramiah.

For the entirety of MasterChef Season 10, I was angry at Subha. This man was lax in the kitchen. Time management? Terrible. Awareness? On three. But when he was on the bottom and had to pull out all the stops to save himself? His flavor? Supreme. Everyone was afraid to be matched with Subha in challenges, but in the same breath, they were afraid to be in the bottom with him because chances are, you were going home.

On episode 16 of season 10, the contestants were booked to serve NASCAR drivers. Set them plopped in the middle of the racetrack as they circle around them, loud noises and all. We’re in the top 10 of the competition so the stakes are high, and any mess up can be critical. Subha is on the red team, with Micah as the team captain. It seems that Micah’s biggest issue is managing Subha because somehow Subha burns the chicken. But the plot twist is, Subha, was not originally assigned to the meat station. He charred it. The kind of char that makes the top of the skin look like a NASCAR tire.

So, when Micah’s team wins and is given an advantage to put one of his team members up for elimination, he doesn’t pick the front-runner Dorian; he picks Subha. Subha came out of that elimination challenge unscathed, but Thanksgiving potlucks run similar to this: If you don’t come consistent you will be thrown under the bus at the meeting.

Weakness in the Structure

In RPGs, I am either one of two characters: the first line of attack, going head first into battle, or the micro-managing healer making sure no one’s health drops below 60%. I know I got heavy hitter capabilities, but that requires me to go into the thanksgiving line up with a plan. My first thought? Look for weaknesses in the structure.

There are a couple of dishes I think could be much better. But pointing this out can come at the expense of people’s egos. I already got a few culprits in mind because I see the stats. When the to-go containers come out, whose dishes are in immediate danger? The person that be bringing the potato salad? They been lacking ever since they put the green peas in there. The person that prepares the chicken? Those legs been overcooked for three straight holidays. I can offer myself as tribute, throw in an improvement, but Thanksgiving lineups hide behind the veil of respectability politics. If you don’t come out the doors with stats, your argument for improvement does not suffice. If you don’t have enough “guts” character stats to say, “putting BBQ sauce on that leg not gonna make the chicken any less Sahara;” and then pop out with the juiciest jerk chicken alive? You’ll be banished from future consideration if you don’t come correct.

Or maybe I can bring something new to the table. The safe way to not piss anybody off. But being a team sport is arguably much harder. Not only do you have to bring something new, it has to be fire enough where people want to get it more than once. If I notice we have a lot of decadent dishes, maybe I can craft something light to balance the plate.

Shokugeki No Soma taught me nothing but violence

Like Thanksgiving, Food Wars! taught me nothing but violence. You prove your place with flavor. Respectability politics in the Afro-Caribbean household always made me cringe. If someone normally makes this dish, even if it’s bad and we have ways of improving, they must keep making this dish. They know best because they have been doing it for so long. Respecting culture is different than adhering to hierarchy. In episode 45 of Shokugeki No Soma, the food clubs are under fire. They must throw out their innovations and practices in order to adhere to the new director’s food manual. Everyone must only make a certain type of dish and made in a specific way. Students disassociating from this manual will be expelled.

Innovation was frowned upon while classism had taken its hold. In order to save his dorm, protagonist Soma Yukihira challenged Chef Eizan “The Alchemist” seat number seven in the Council of Ten to a food war. With a board of judges willing to forego tasting a dish because it uses ingredients not considered “top quality” or doesn’t put the quality of an ingredient above its preparation, it goes completely against Soma Yukihira’s style. Soma utilizes every day’s cheap delights and elevating it into deliciousness. Chef Eizan presented Khao Man Gai, taking careful attention to not alter the chicken’s natural flavors too much. One bite and every tongue squealed with bliss. Eizan presented a formidable classic that didn’t stray too far from the books.

Season of the Underdog

Soma Yukihira was the underdog. The judges were prepared to discard his dish and name Soma defeated without taking a bite. Soma prepared a chicken wing gyoza with a rich ankake sauce. He removed the bones of the chicken and stuffed the cavity with ground pork, shiitake mushrooms, scallions and cabbage, then prepared a bone broth and used it to make the ankake sauce. From the jump, I was like oh shit, that’s fire. Captivated by the scent, a judge took a bite. He was taken aback by the flavor! The delight. Soma Yukihira won the food war and saved his dorm.

In Shokugeki No Soma, you can tell how delicious food is due to the sudden unraveling of clothes. A character takes a bite and is immediately transported into a haven where they’re doused in sauce and relishing in spices. Food wars, where the food is so delicious, threads are no longer worthy of people’s body. I aspire to such deliciousness, but Thanksgiving is a place where I look for cracks in a foundation…it’s where I find my place. I got it. Appetizers. People are always waiting hours for food. Sometimes, the kitchen is not done until 6pm, but there’s people with kids and you know what people can’t get enough of? Wings.

If all else fails, wing it!

I realized this might be the passive aggressive way of knocking out the other heavy hitter that brings in the jerk chicken every year. I got enough exp points to throw hands if I must. I marinated the wings in a berbere overnight with a slight pinch of baking powder. Baking powder dehydrates the skin and allows it to crisp in the oven.

Round one. Crispy berbere wings served with a lemon thyme yogurt sauce. The spice for the heat lovers, served with a cooling agent for those on the less daring side. 30+ hit damage. Brought it out on one of those appetizer towers you see at tea shops. 40+ hit damage. The aunties are scrambling. The visuals, kept them coming. What were they going to argue about? If anything, I saved them time and alley-ooped my mother once again. +20 hit damage. The final boss is down, but you have to keep rolling. I pulled out three rounds of fresh wings. One after the other. People got off the cooks’ backs and stayed out of the kitchen. The kids, no longer screaming. I have won. I have secured my spot in the heavy hitter’s ceremony in my 20s by creating a wave of delicious convenience.

I realized this when my grandmother started calling me for cooking advice. Or last week when my mother tried to convince me to fly down and prepare a platter. Food became all about experimentation and bringing smiles to the people I loved and indulging in cultures I couldn’t when I was a kid. My thanksgiving prep is never complete if I’m not returning to Tōtsuki Culinary Academy or cringing at kitchen mistakes in culinary competitions. Always returning to my roots, because if I must, I’m willing to sheathe knives.