It’s easy to overlook a book like Captain Marvel, even as well put together as it is. Marvel has so many books where its most popular heroes crossover, you can probably access three other current books where Carol Danvers is an active participant. More astutely, there is the confusion of a new Ms. Marvel book that has had such a social relevance on top of being an excellent book. I am frequently surprised that some of my fellow nerds aren’t aware that Earth’s Mightiest Hero has her own book right now. Well, she does. And it’s marvelous. With Kelly Sue DeConnick at the helm, that doesn’t necessarily surprise me, but something she did with Carol’s story did.

I have been reading the new run of Captain Marvel from the beginning, but I hadn’t begun reviewing it until issue #3. To catch you up with the broadest of strokes, in the fallout of the Infinity story-line in which the Builders destroyed so many homelands and civilizations, an alien race known as the Nowlian have become refugees. Their remaining civilization has been forced to live on a planet that is making them gravely ill, yet they have nowhere else to go. After returning one of those refugees to the planet, Carol sees them Nowlian in their dire straights and decides to do the hero thing like any good Avenger would. When Carol is asked by President Elianides of the Nowlian why she is still there after dropping off the refugee, she goes on this long diatribe about how she is there to help them, how her presence has been requested and needed for the sake of the Nowlian people.

While I love Captain Marvel, and feel like Carol Danvers is one of the most likable characters (especially the way DeConnick writes her) in all of comics, we can’t ignore the aesthetics here. Danvers is (and always has been) the visual equivalent to the Barbie superhero. Beautiful. White. Blond. Blue Eyed. And up till recently, quite buxom. There is a long history of the white savior coming to save the natives, be they members of a Na’vi in Avatar, the indigenous peoples in a Far Cry game or, ya know…Africans or inner city youth. Especially, dare I say, with white women as the protagonists. Hollywood would have you believe its some pre-destined vocation for a strong white woman to cradle a gravely wounded and dark-skinned young girl in her arms while whispering, Never again. Never again. This isn’t the same situation if you substituted Kamala (the Muslim teenage girl who has succeeded Carol as Ms. Marvel) or Black Falcon swooping in for the defense of these people, and DeConnick has recognized that. 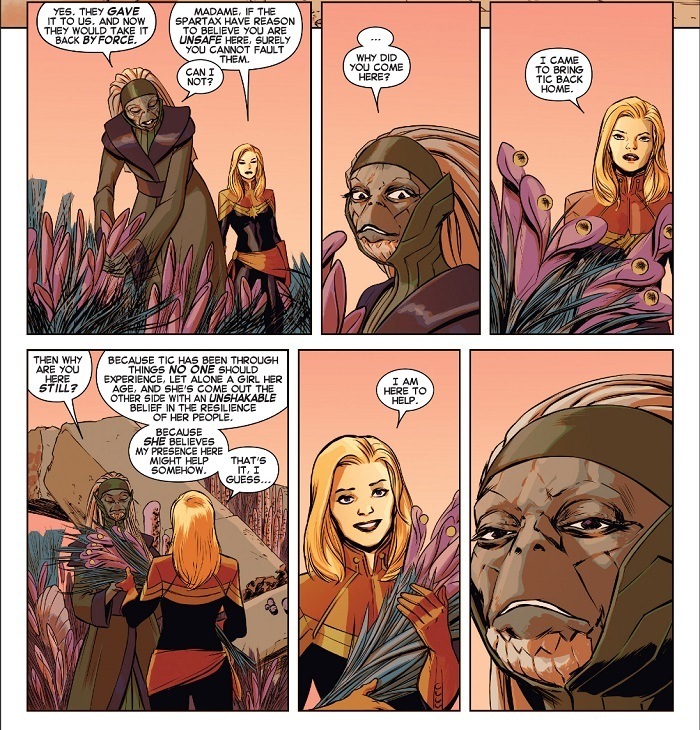 It would have been so easy to use this same mechanic in Captain Marvel #3. We’ve seen this story so many times and the fact that it would’ve been happening in a pretty good book, I doubt many people would’ve batted an eye at such a familiar trope. But that isn’t what happens. The president asks her some very simple questions: Where is the medicine for my dying people? Where are the weapons for them to defend themselves? Carol has brought none of these things and the President lets her have it full force. It’s a sobering moment for Carol in the story, but such an eye-opening moment for this tried and true (American) story as well. As it is relayed in the text, there is an arrogance to this mind state. One that where he or she of means selflessly gives themselves over to those that couldn’t possibly survive without them. 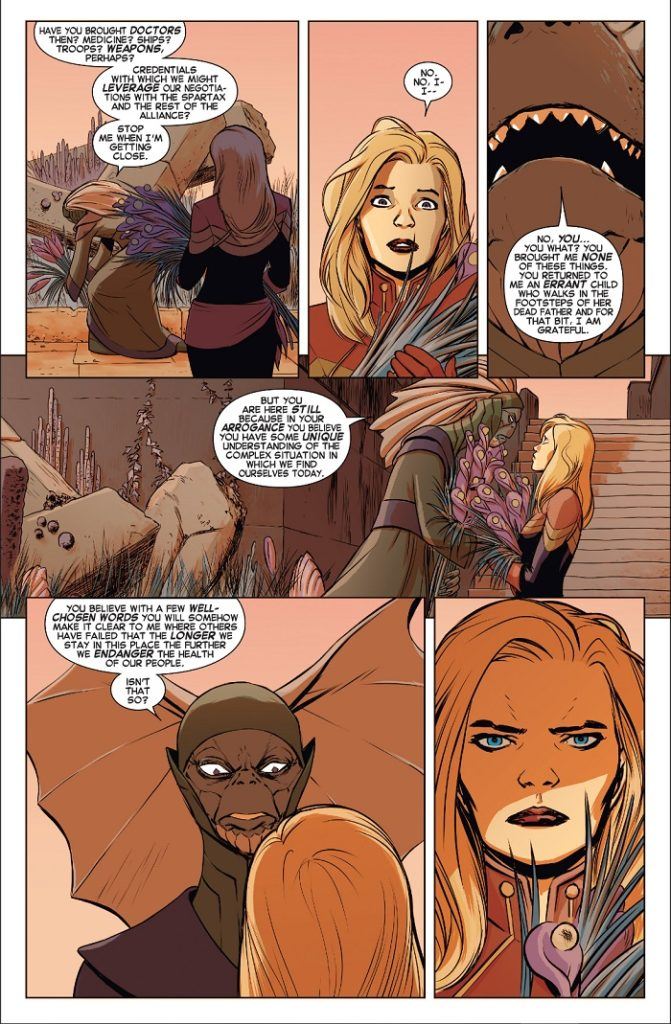 By the time we get to Captain Marvel #5, the book has spent the time giving Carol real relationships with the members of this community, tying herself to them in an organic way. She becomes less “for” them and more “of” them when she decides to enter the fight on the eve of an invasion. Do we end up in the same place with Captain Marvel fighting for the underpowered people? Yes. But it is much more earned and it makes a world of difference when we’ve been fed the alternative for so long. As someone who is typically represented in the demographic of those that need the saving, the extra mile and earnest storytelling makes a big difference.

I’ve said it before: if you haven’t been reading Captain Marvel, you should be. Not only is it just a well done comic book with one of the most kick-ass protagonists on the shelves, but it’s also thoughtful in the way many comic books aren’t and frankly because of their audience, seldom need to be. DeConnick deserves credit for not only writing a consistently good book, but one that can subtly include moments like these that challenge the status quo.