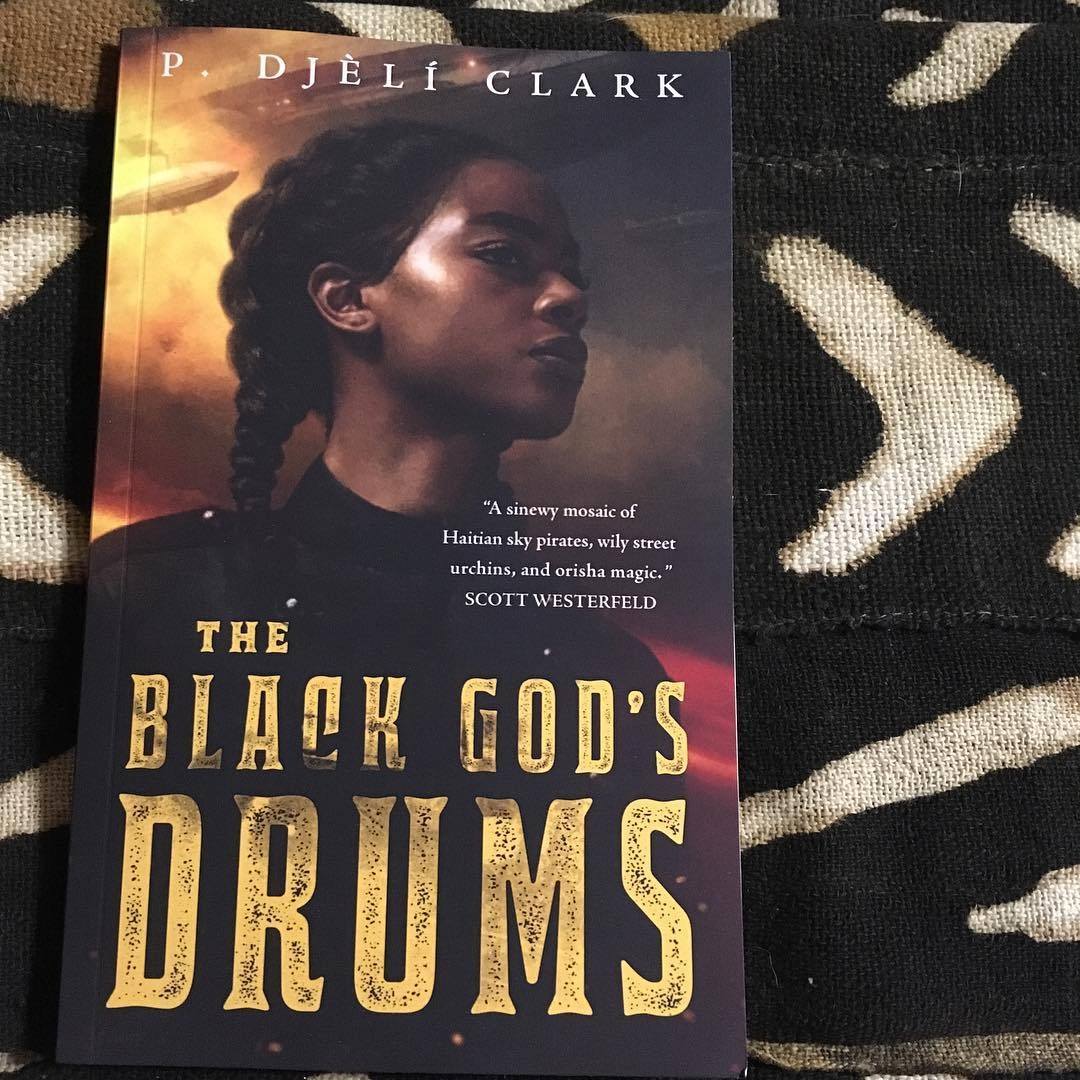 We are deep in the middle of a novella explosion, fam. This shorter format has always been popular with science fiction, but the novellas I’ve read in the last year have been mind-bogglingly good. The Black God’s Drums by Phenderson Djèlí Clark is absolutely a perfect example of the style. It is also a showcase for the interest from Black writers in the steampunk and alternative history subgenres. Am I telling you that everything P.D. Clark sets out to do, he does to 100? Yes, that’s what I’m telling you.

“My nickname on the streets is Creeper, and for good reason. Just like ma maman in the sweet gum tree, I’m a damn good climber.

Creeper is our main character. She’s a handful. She’s spent the last few years surviving on the streets of alternative history New Orleans. She’s a pickpocket, an information salesperson, and a survivor. Her New Orleans is a “free city” that survived the Civil War and has maintained its independence due to the help of the English, French, and the Caribbean powers, chief among them Haiti. Meanwhile, the North and South have ended open hostilities, settling down to a cold war with significant consequences for everyone unlucky enough to share the hemisphere with them.

While going about the business of living, Creeper overhears some information she thinks she can sell. It is the selling of her eavesdropped secrets, who she meets and what she does with the information, that forms the story. She’s wily enough to try to trade the secrets to the captain of the Midnight Robber, a Free Isle privateer by the name of Ann-Marie St. Augustine.

(And if you’re wondering if the name of the ship, Midnight Robber, is a reference to Hopkinson’s novel, and to the traditional carnival character, I’M SURE IT IS!)

Augustine is my favorite character in the novella, she’s a mature woman who knows her mind. She’s sharp enough to stay ahead of the law, but not too stubborn to admit she doesn’t know everything. Her character arc features just as much evolution and change as Creeper’s does.

“Calling on her was always like flipping a coin: one side blessings, the other chaos. I’m throwing up that coin now, and praying it comes down on the right side.”

Oh, and then there are the deities of this world, Shango, Oya, Oshun, and the other orisha. None of them “appear” as such in The Black God’s Drums, but they influence everything through flips of luck, gentle breezes, and lightning strikes. Clark does a seamless job of integrating this mythology/pantheon into the story without letting it become *about* them.

Clark assembles all the pieces of a strong unique alternate history setting. More and more, I’m exhausted by alt history that can only place Black people into slavery, but never imagine other outcomes. This one does exactly that — pushing Haiti forward as the new superpower of the area, and having that revolutionary country influence all of its neighbors. In our list of Alt-History Projects that Would be better than Confederate, this setting is definitely one of them.

Along with the alternative history, there is a well-realized steampunk aesthetic throughout, with mysterious machines, death gases, and weapons that activate nature itself.

There’s plenty of adventure, running through the streets, finding secret allies, and raiding swamp hideaways. This is all described by Creeper in the course of the action. Her voice, and those of her friends and enemies, are fresh and varied.

“We get dropped off just a little ways in and the boatmen turn back, leaving us with wishes of luck and God’s protection.”

The aspect of The Black God’s Drums that I enjoyed the most was the way that Clark skillfully flips so many tropes in constructing his characters. I attended a panel about this at a convention — about how to take the expected stereotype and invert it to make a social comment. Clark’s got that skill down-pat. His Creeper is the daughter of a prostitute without shame, she wears “boy’s clothes” without necessarily indicating something beyond what she finds comfortable. The Captain is a one-legged pirate, but a woman who defies all kinds of categorization. Her ship’s crew consists of Native Americans, Indians, and Mongolians. I want a follow-up novella that just explains how all of them ended up on the Midnight Robber together.

This fantastic New Orleans is integrated, gritty, dangerous, flooded, and a little sexy — like our modern New Orleans. I am reminded again that good speculative fiction sinks its roots deep into our present and re-imagines it. That rooting in reality, at its best, includes all of the kinds of diversity that are on display in The Black God’s Drums.

Clark pulls all of his pieces together in a fantastic way. I can recommend checking out his other works, listed on his site

If you’re interested in steampunk, alt history, or just a speedy speculative fiction adventure, I can absolutely recommend The Black God’s Drums. It is available in print and in digital everywhere. You can also ask about it at your local library.

“The magic of those old African gods is part of this city, ma maman used to say, buried in its bones and roots with the slaves that built it, making the ground and air and waterways sacred land. Only we forgot the names that went with that power we brought over here” • • • #theblackgodsdrums #pdjeliclark #bnplit #blackbookstagram #blackspeculativefiction