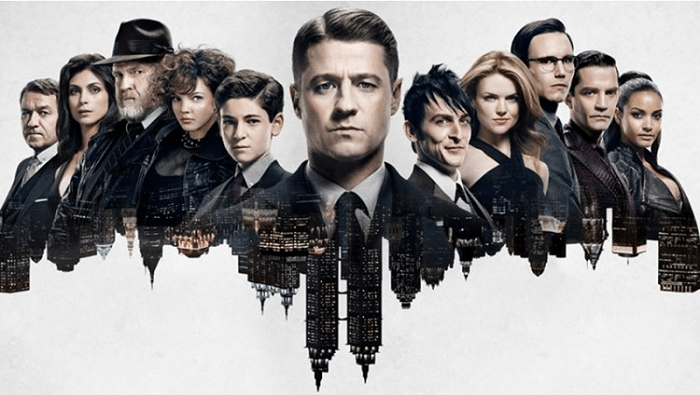 Season 3 of Fox’s hit TV show Gotham airs on September 19th and it’s going to be bonkers! The cyber streets have been buzzing about the new cast members and the return of others. Gotham was nice enough to let us watch the first new episode and talk season 3 bars with the the cast over some cheeseburger sliders and vegetarian puffs. The first episode of the season was lit, too. The best part was chopping it up with the cast and getting their thoughts on the new season. From what I hear these character developments bout to be flames! Story lines gon’ be mad intricate. People bout to get got left and right. The come up is about to be super official. This may be the most fire season of Gotham so far. Got season 3 out here looking like the cinematic manifestation of started from the bottom now we here.

We watched the first episode in a super sketchy, incognito, hole in the wall location with a lot of finger food. My favorite part of the episode, which is really hard to choose, were the easter eggs. The Dark Knight die hards and comic book junkies aren’t going to be disappointed. The first episode drops a couple of secret messages and character appearances that you won’t catch unless you were really with us shooting in the gym. The first show definitely leaves you wanting to binge the whole season but filming has only gotten 7 shows deep. So I grabbed a veggie puff and some cheese burger sliders and made my way through the crowd to talk to the cast and see what we could expect from the new season.

I run into Chris Chalk (Lusicus Fox) and Cameron Bicondova (Catwoman), who has on the flyest jacket I’ve ever seen. I tried to get the scoop from Chris about any of the new gadgets we’re going to see this season but the force was not strong with me so he wasn’t able to give me much. I also, finally, got to ask Cameron about the Gotham City Sirens possibility now that we have Harley coming to the show. Check out the interview below:

The surprise guest that you were hearing was Benedict Sammuel (Mad Hatter) who just got back from Australia and was stoked to be on the new season. We don’t get to see him in the opening episode but he says that when the Mad Hatter comes “he comes with a whirlwind!” I don’t even know what that means. Nobody knows what that means but it’s provocative and gets the people going. While the Hatter and I were having some tea I found out Ben’s favorite Wu Tang member is ODB. I’m a Method Man fanatic myself but you have to respect anyone that says Dirty is their favorite. It’s the law of the Wu.

I got a hold of Ben Mckenzie (Jim Gordon), Cory Michael Smith (Edward Nygma), and Sean Pertwee (Alfred), on my way to find the fancy cheese burger sliders and we had a lot to talk about. Sean was looking forward to being back in London for a little while but did let slip that Alfred was getting a love interest this season. I’m going to be looking out for the Gotham Relationship goals memes real soon! He also does most of his own stunts. Ben McKenzie and I were chilling by the bar awkwardly trying not to have a conversation about him being on The O.C. in the early 2000’s. He was keeping it a buck with me and said that halfway into season Jim Gordon was going to go “cray cray.” On gawd he said that. Cory is feeling pretty good about The Riddler this season. Right now we’re at about 74% full riddle me this. By the end of the new season we may be at a strong 88%.

Drew Powell (Butch) was so much fun and kind enough to cop a squat with me and talk some real rap raw about S3 and what we should expect from the big homie Butch. We heard the news that Jada Pinkett Smith (Fish) was making a return to the show. What I really wanted to know about was how that was gonna play out, seeing as how the last time Butch and Fish were together he busted a cap in her leg. Drew is also trying to put some points on his nerd card and is reading some books you may have heard of. Peep the interview and let me know if you have any suggestions for the homie Drew on what he should be reading.

The super secret night at a sketchy location somewhere in the country was coming to an end and all the veggie puffs were gone. Which meant it was time for me to leave. But, I see Michael Chiklis (Barnes) in the distance and I had to chop it up with him before I bounced. We sat down and talked about everything under the gargoyles. Michael has 40 plus years in the game and he dropped some gems about Gotham. Chiklis has played cops in the past but he let out to me that what happens with Barnes in this new season was the reason he said yes to the role.

Some blerds may best recognize Chiklis as The Thing in the Marvel’s Fantastic Four Movies. Now that he plays a DC character I asked the question that could end a fragile friendship… Marvel vs DC. Chiklis gave me the spin move on the question for a few seconds but he did say…” The only right answer when you’re on a DC show is DC… but that might not be the answer… but I’m also not saying it isn’t.”

Let me know what you think of Chiklis’ answer is in the comments and on Twitter!