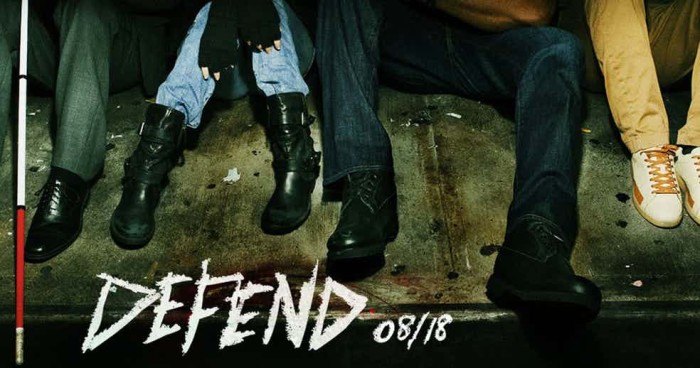 The first official Defenders trailer just dropped and boooooy does it finally give us some ass kickin’ madness for us to sink our teeth into. The teaser trailer dropped back in July last summer and was enough to hold us over until it was time for the team to come together and blow the hype levels up on some four fighter DBZ fusion dance shit!

Misty Knight opens up the trailer pressin’ that girl Jessica Jones for all the fuck shit she been into. Stealing evidence from crime scenes and getting lone leads in a citywide investigation killed among plenty of other debauchery that she most definitely got into. It ain’t lookin good for ol’ girl, until da blind homie Matt Murdock rolls up like, “You can refrain from answering those incriminating ass questions cuz your savior attorney just walked up in the mufuckin’ building!” Jones’ face was absolutely perfect when she looked at him like, “Da fuq is this guy?”

Out in Harlem, the other half of the team is getting acquainted, thanks to last year’s Fictional Bae, Claire Temple. Luke Cage knows he just wants to help others so Claire puts him onto another man who has experienced some unusual circumstances obtaining hero fame; Iron Fist. Their meet up isn’t exactly the makings of a gang gang gang squad up moment, though. Hot headed ass Iron Fist was about to to put a crater in some dudes face when Luke Cage stops him. Danny Rand, being who he is, goes to put the beats on Luke Cage but quickly finds out he’s basically punching a titanium wall. Iight, time to level up. Danny unleashes his explosive power and hits Luke with the mean illuminated One Punch Man right hook of doom. The slow motion capture on that hit was tsunami wave rippling flames! you can tell they’re not going to spare any SFX/CGI expenses when these four come together to defend the city. Leeeeets just hope they got rid of whoever did the choreography for Iron Fist and stick with the Daredevil style fighting cuz we all know how that went.

“The war for New York is here, so get your shit together.”

Fam, I can never get enough of a Stick voiceover. Especially when he talkin’ allll the shit in the world. Yo, Stick is best audience stand in. He says all the things we want to about this team of fighters. On some real shit, him simply calling each team member exactly what they should be called or who they’re known as would’ve been enough for me.

Did my eyes just see that trailer correctly?! Just who was that leading the evil charge? The OG femme badass, none other than Sigourney Weaver as the mysterious villain, Alexandra! Well, cot dam.

Clearly they bringin Elektra back from her time laid up in the coffin. Didn’t get to see much of her, but they made sure to include a little payback for Daredevil.

“The more connections you have, the easier it will be to break you.” was a pretty menacing ass quote. I think I can officially get down with Sigourney causing mayhem for our team. That office hallway fight scene looks like it bout to be another sweeping single shot of epic magnitude.

This trailer brought a proper mix of comedy, action and genuine surprises. Here’s to hoping it all comes together into dopeness this summer.

Mark your calendars and set a reminder in your phone for August 18th folks! The Defenders each had their origin stories laid out, not it’s time to see them unite for the sake of the greatest city in the world.