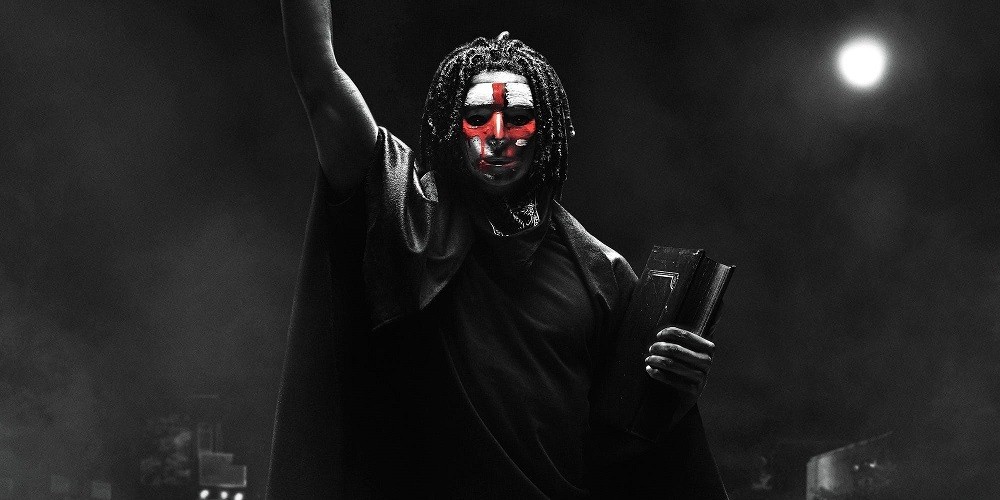 Did We Need a Black Lives Centered ‘The First Purge’ Right Now?

The First Purge is a heavy handed metaphor on the real actions of the United States government and classism, with a Black Lives Matter neck snapping revenge. I went into this film with no expectation of … well anything at all. It’s been a while since I’ve seen a Purge film, and I missed Purge Election. I’ve been down for the socio-political lens that The Purge movies have executed, so I am not surprised by the direction this film was taking after seeing the first trailers. A history of the purge where the country targets poor people to experiment on, makes sense…sadly.

The film takes place on the borough of Staten Island, this being the test zone for the purge experiment. We begin the film in a close up of a black man with facial scarring, portraying an unhinged violent drifter being interviewed by a blue eyed white man, asking him if he feels violent, if he is angry. With over the top fervor, the man who calls himself “Skeletor,” played by actor, Rotimi Paul pleasantly agrees that he is angry and would kill anyone. As I said… heavy handed metaphor, which at this moment, I did not appreciate. I stuck with it to see how they were going to make the movie worth it, for enduring that first scene.

This scene set up the stage for what was really going on with the Purge experiment. The newly formed government NFFA (New Founding Fathers of America) worked with renowned psychologist and scientist, “The Architect” Dr. Updale played by Marisa Tomei, to develop a way to change America for the better. Using a small control to see what benefits a “Purge” night would have.

The exposition in this film made me feel like I was watching a 90s classic, Boyz in the Hood style flick, you would think – ok nostalgic! It just made the writing and character development seem out of place. I know the timing is supposed to be around current times, this being a prequel and all, but it didn’t translate real well.

After being introduced to the premise, we then get introduced to our main characters. Nya played by Lex Scott Davis (Superfly) is the do good, looking out for the hood and her little brother, on the front lines protesting Janet Jackson Poetic Justice character from the streets. She’s the only caretaker of her brother, the one organizing people to stay at the church for the night to be safe, and is just doing the best she can, in the “best” way, meaning honorable I guess. 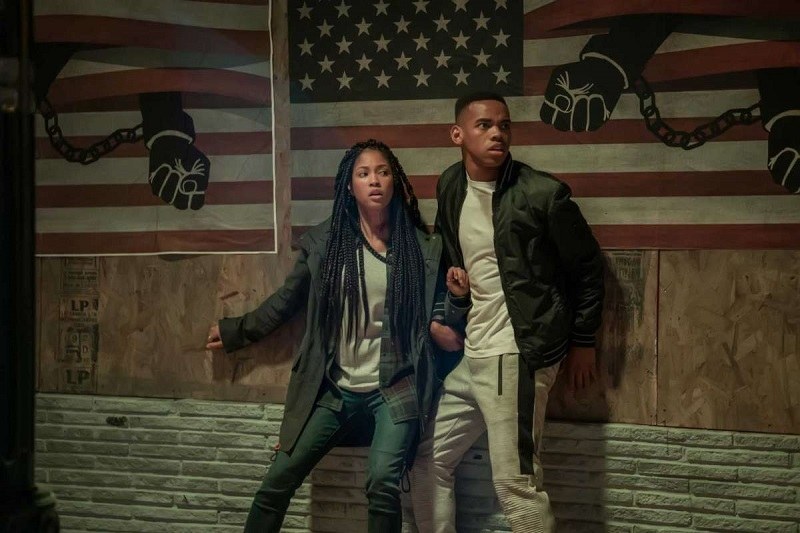 Her brother on the other hand is trying to help any way he can. Character Isaiah played by Joivan Wade (Doctor Who) a black boy who decides to start drug dealing to make more money to correct his current impoverished situation… you know that story. The sister has to find out and reprimand him – “There’s other ways!” I’m being harsh, only because I am spoiled with super nuanced movies that give me a deeper slant on what is happening in the country that motivate me for change much better than this. In all seriousness, it is a Purge movie, so I did let my guard down more and more as I watched. Sometimes a simple metaphor is all we really need.

We then meet our star of the film, Y’lan Noel (Insecure) local gang kingpin Dmitri. This man is the truth. He rides up in the all black SUV to the projects to check in with the hood. We get a glimpse of his relationship with the neighborhood elders, one of them being Steve Harris (Friday Night Lights) haven’t seen that guy in a minute! Basically, everyone knows this Dmitri guy to “own the block” as we say. Since he is the leader he institutes that the gang is gonna lay low and protect their own during The Purge, since they would be a target for the other gangs. Oh yea and he used to date Nya.

As the night progresses and I won’t give spoilers, as you would imagine ish goes down. The government does some more shady F-ed up ish that has my man Dmitri in the streets John Wick-ing people. FrickinYippee ki-yaying motherFers like he should be re-casted as The Punisher out here. I say see the film just for this dude snapping necks. Maybe on discount Tuesday or matinee showing, save yourself some cash, but you will thoroughly enjoy this man’s journey more than anything else that happens in the film. 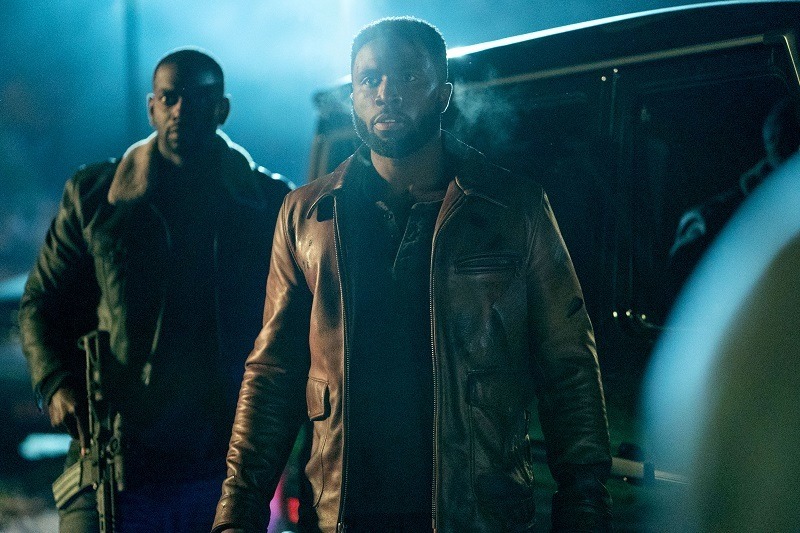 That said, I felt they tried too hard to show the nuance between black on black crime and what the government does to black and brown impoverished people. The introduction of the skeletor character was almost a classic Michael Meyers sadistic horror tactic but just too over the top, and in the end not as interesting as what else was going on. At the same time they worked real hard to instill current politics in the film, having a – (trigger warning) LITERAL pussy grabbing scene in the street that makes you uncomfortable, but the main character gets to yell “pussy grabbing MotherFer!” as she escapes – just not necessary. The evident black and white split was not inventive and wasn’t a game changing metaphor or newly inspiring, but seeing black people get revenge on KKK and Nazi’s is always fun.

There is a mid credit scene linking to the sequel Purge films so check that out. And another bonus credit moment, that’s basically a commercial for The Purge TV Series coming out…not sure how that is gonna work but it’s happening…

In the end, I don’t think director Gerard McMurray (Producer, Fruitvale Station) did a bad job, but didn’t meet the bar for me. I wish the writing were stronger, some of it made sense when I saw Michael Bay was one of the producers on the film. I may not be keen on such a blatant telling of the Government trying to kill us off in droves through a Purge night, but I’m sure someone can appreciate the gesture. And it allowed for a Black Lives Matter focused Purge movie to get out there, whether we needed that or not, I’ll leave up to you.