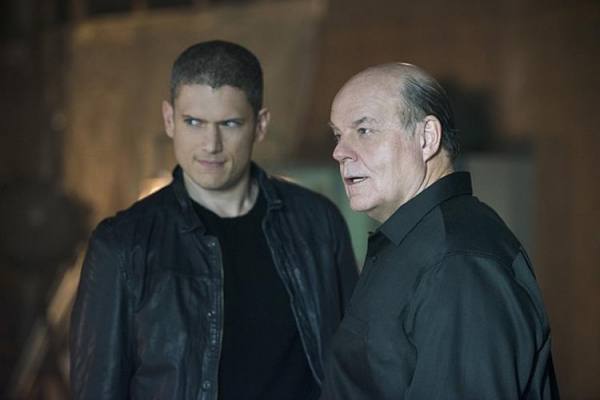 Just another day in Central City. Barry is up in his lab mixing shit for a new fruit drink when he gets a call from Iris and hears gunshots in the background. He asks if she is in the studio and those are just sound effects for the contemporary hip-hop track she is working on or if they’re for real. Oh yeah, they’re real. Sooo what’s Barry’s solution? Find a window and jump from that shit. At this point in the game I’d rather take my chances with the bullets ’cause these dudes bucking gotta run out of ’em eventually, right? You telling me I gotta do this trust fall from 20 stories up and my partner isn’t even there? NOOOoooooOOOOoooope, Iris way better than me.

Back at Star Labs we get a glimpse of the biggest breach between Earth 1 and Earth 2 chillin’ in the basement. How do you not notice that shit for days? Again, who is doing security in this place and doesn’t see that giant worm hole? Maybe the guard does see it and is like:

“See this that weird shit these nerds are always on? Worm holes in the basement, meta-human prison cells in the attic, flux capacitors and hidden rooms with future computers? Oh but they gon’ blame me when giant telepathic gorillas break in… *sees Barry trying to use his speed to jump through the portal* I’m moving to Gotham. I’ll take my chances with the cats killin’ with weather balloons. These nerds are weird.”

Professor Stein walks in and the countdown to when he faints again begins. The gang concludes that the portal must be stabilized in order to reach the other side. Jay gets to work doing that ’cause the more news he sees stuck here on Earth 1 the sooner he wants to get outta dodge.

The crew all goes to get Coffee at Jitters cause that’s the “it” thing to do. Barry runs into Patti and Cisco and literally bumps into Lisa Snart a.k.a Golden Glider a.k.a Captain Cold’s younger sister. Cisco threatens to call the Flash but that’s what she wants because she believes her brother was kidnapped. They take her back to Star Labs (this is why y’all security is still trash) as she explains on their last heist — Cold was being thrown into a van, she got knocked before she could help, and Mick (Heatwave) helped in his own way by making off with the money (they knew his heart).

Flash owes Snart one for not killing him back when he had the chance, so he’s down. Cisco put a tracker in Cold’s gun (think reverse heat signature) and found his latest location. Barry speeds over to the rescue…

Or you know, not. Barry lookin’ at him Snart confused and fed up, like “Dude are you kidnapped or not? Your sister said you were, I said I’d check it out, I’m here now. You’re either filing TPS reports or robbing this office, which is weird but, wait, someone else is here? Who tha– AHH YOU’RE FREEING ME?! THE FUCK, MAN?! WHY’D YOU DO IT FROM MY JUNK UP!?


[divider type=”space_thin”]
In walks a man that was at a couple Johnny Cash concerts back in the day and we see that it’s Lewis Snart. Lenard and Lisa’s father. Lewis is type ehhhhhhhhh impressed with what Lenard did to Flash. They bounce and Cisco activates the heated thermal threading he added to the suit to save Barry and all his privates. That’s some fucked up shit, man. Lenard didn’t have to put Barry’s generations on ice like that. Back at Star Labs Barry is in Lisa’s face talkin’ ’bout getting his junk frozen and Lenard teaming up with their father Lewis. Lisa got the “Come again?” face on. Lenard haaaaaaates their father, and it’s true hate, that is past the level where dad won’t let you borrow the car ’cause you left an empty milk carton in the fridge type hate. We learn exactly why that is as Lisa demonstrates.

Yeah, Lewis Snart is the physical incarnate of taking a dry shit. It becomes understood that he must have something on Lenard in order for him to be working with him.

Meanwhile Joe West wants his wife Francine, who is very much not dead, to get gone. He gives her money to skip town but she wants to get to see Iris. Which is hard on Joe because, you know, she thinks Francine is dead since that’s what Joe told her. Joe goes to Iris’ work to try and tell her ’bout her mother being alive then, Linda Park informs him of how great in the field Iris is. Joe gotta be proud:

Barry meets up with Lenard Snart (I assume at the bar from 48 Hours) as he is eating dinner. How Lenard gon’ not even acknowledge giving Barry the icy(no hot) to the nether region and ask dude to pass the salt. Barry tells him that since his father won’t honor the no killing clause of their deal, they goin’ get the take down, don’t matter if Lenard leaks Flash’s identity either. Lenard proceeds to finish up his food (spill salt out of spite) and then leaves Barry to pay the bill. That’s the coldest shit I done EVER seen a villain do. That’s some straight up foul shit right there. That shit deserves mics in the source if we’re being honest.

Later on, Joe tells Barry that Francine is alive. Barry doesn’t think Iris will hate Joe for keeping this from here. Barry said, “You ain’t want Iris to grow up with the wrong influence. Look at Lenard, his father was a straight up criminal… hence why he freezes folk tying to help him out in the dick but that’s not here or there. Just tell Iris the truth, you good.”

Lewis is goin’ over the details of the next job with his son and another guy joining them on their crime spree. Lenard offers better solutions that don’t involve killing as well as providing stealth but Lewis is just about the easy in, shoot some folks, and easy out. Lewis tells Lenard to make sure his freeze gun or super soaker will find some way to be useful. When other guy starts goin’ in on Lenard Snart, Lewis pulls out a detonator and dude’s head explodes.

Joe and Barry join Patti on the scene where headless dude is discovered. The question is how was just his head able to explode. The guess is that a micro bomb was placed in his head, which means that in order to get Lenard’s help, Lewis must have done the same to his own daughter. Bingo! The crew sees that Lisa also has a micro bomb in here and that taking it out isn’t going to leave them many options since exposing it to air will cause it to go off. Cisco works on trying to create something that’ll take the bomb out and Barry decides that Lewis blew up his crew member who happened to be a techie, he’d act as a criminal and infiltrate them from the inside.

Now imagining Barry being a criminal is like imagining Dick Van Dyke doing Richard Pryor’s style of stand up. Barry shows up to Lenard’s hide out and tells him this. Lenard is just like, “That is a horrible… you know what, I’d actually like to see this. Fuck it, let’s go for it.” Lewis buys the act even though Barry says his name is “Sam”. Lewis looked him up and down thinkin’, “This dude too fucking geeky to be a “Sam.” He’s an Archibald, at best… or a fucking Bartholomew”

The plan is to impersonate being janitors so they can steal some diamonds. This shit gotta be weird for Barry ’cause he’s doing real-life cosplay and having to listen to Lenard and Lewis fight with one another. I don’t think I coulda handled that. 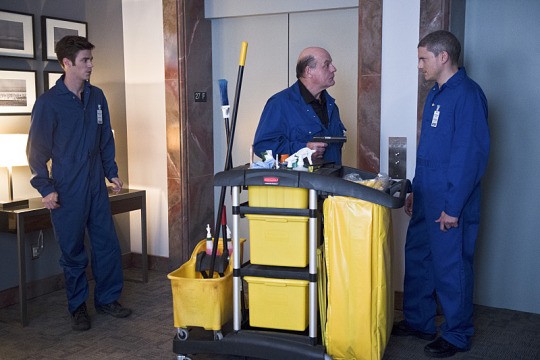 [divider type=”space_thin”]
Barry used his wits and super speed to prevent Lewis from killing multiple people. As soon as Barry cracked the code for the tech locked door (by punching in every combination… which isn’t really THAT skillful, but whatever). He gets rewarded with a bullet to the body from Lewis, worst boss ever. Lenard gets them past the lasers guarding the Diamonds then The Flash shows up. Flash stalls long enough for Cisco to use the device he created to extract the bomb from Lisa with success. Upon hearing that Cold proceeds to point the Freezer (Get it? ‘Cause guns are usually called “The Burner” but his gun creates sub-zero temp… never mind) on his pops and pulls the trigger on ’em.

Barry: Daaaaaaaaaaaaaayuuuuuuuuum *slowly takes gun away from Lenard* I mean. Ya sister was safe… You ain’t have to go and do all that but… I’m not going judge you. I am going take you to jail cause TECHNICALLY you did kill someone sooooooooo.

Joe West finally tells Iris that her mother is still alive. She was an addict and it put Iris in danger many a time which was too many. She skipped town on them and he didn’t want Iris to have to deal with the reality of how her mother truly is, instead of the fondness she remembered her for. You can see the straight up distress it brought him because Jesse L. Martin OUT HERE ACTING HIS ASS OFF! YOU BETTER ACT BOI!

Lisa leaves Cisco thanking him and realizing that he is the first true friend she ever had. Jay Garrick was finally able to stabilize the wormhole with a compound Earth 1 don’t even know about. He is about to go home but the gang’s puppy dog eyes keep him there for a while longer. It’s almost a happy ending until Professor Stein iron gets low or sciatica starts acting up or Firestorm matrix blood pressure is up.

Oh… and guess who back on Earth 1