On this week of fun, the girls step out for a bachelorette night on the town, but their party takes an unexpected slithering turn! On the flip side, the boys save Barry from a boring night at the West Household and turn the groom-to-be into a raging, yaking, identity-revealing Speedster bro. Let’s jump into this episode of Jersey Shore meets UFC meets Girls Trip.

The guys are at HQ trying to figure out who this future Devoe villain might be. But there’s…ya know, like thousands of Devoes out there so they settle for testing Ralph Dibney’s stretch power abilities. Felicity drops by with bachelorette party trinkets and bounces almost immediately after seeing the lower half of a man standing in the room, while his upper body extends through the halls of S.T.A.R. Labs. Speaking of the secret hideout of The Flash, Felicity continues this season’s barrage of straight roasting flames on their lack of security or intruder alarms. Barry and Cisco straight up acknowledge it like, “Really? Never noticed.” *Fuck it Shrugs* At this point it’s an inside joke that’ll never get old. 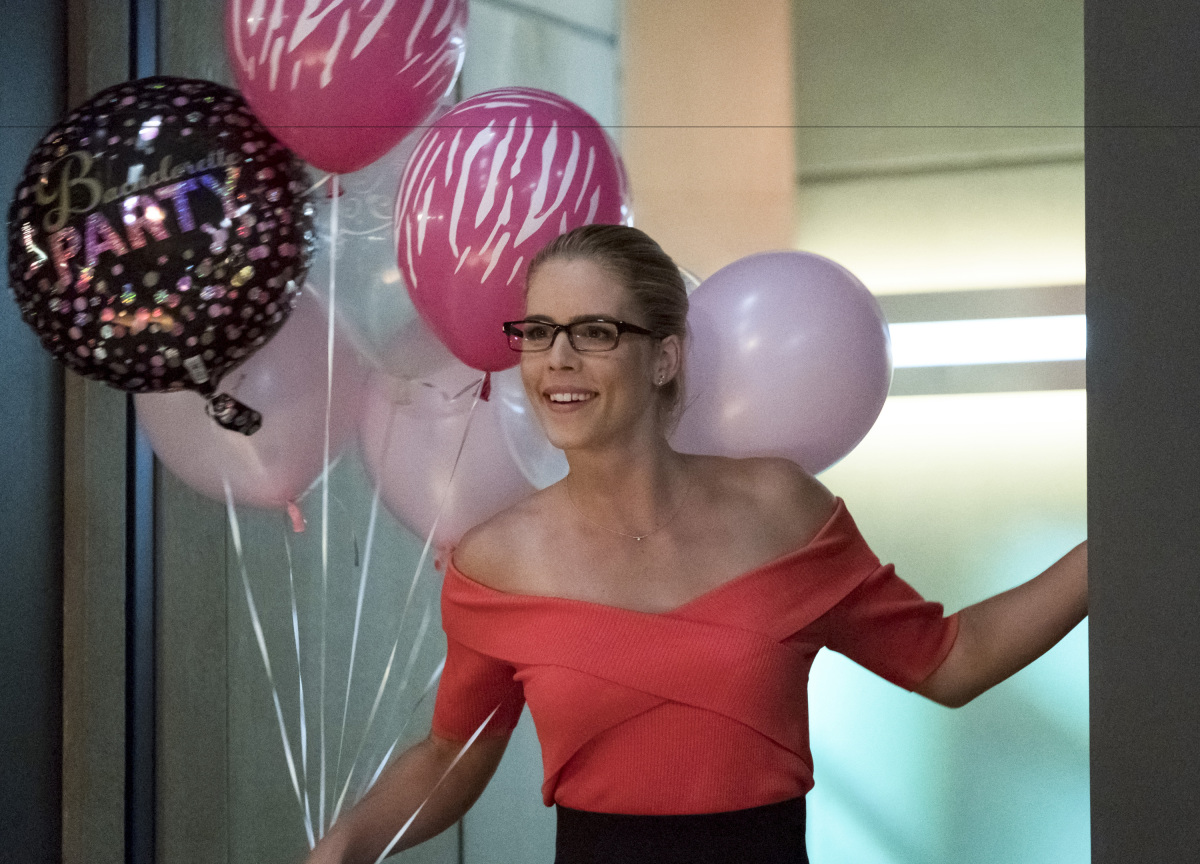 I was really hoping the director/showrunners were going to bless the fans by playing the song “Ladies Night” as the backdrop for this low-key bachelorette party, but I settled for figuring out who each of them most closely resembled and reminded me of. Iris is the gangsta, freaky (when CW lets her and Barry shine) and always queen, Lil Kim. Cecile is the voice of Central City, the overseer and guiding light, Angie Martinez. Caitlin is the loose cannon of the group, always ready to go from 0 to 100 (or in her case, 0 to -100), Da Brat. And Felicity is the always Super Duper Fly, Missy Elliott.

The girls are out having a good time when that goon Norvok, who keeps pressing Caitlin, shows up talmbout Amunet needs to see her not now, not right now but right the fuck now. His glass eyeball flies out of his socket and out pops some extraterrestrial looking snake appendage trying to…I don’t even know! What the hell would that thing have done? Latched onto her face and drained her? Poisoned her? Snatch her up by the eye and yank her across town to this evil crime boss? Anyways, Caitlin goes full Killer Frost mode and blasts dude through a huge window. 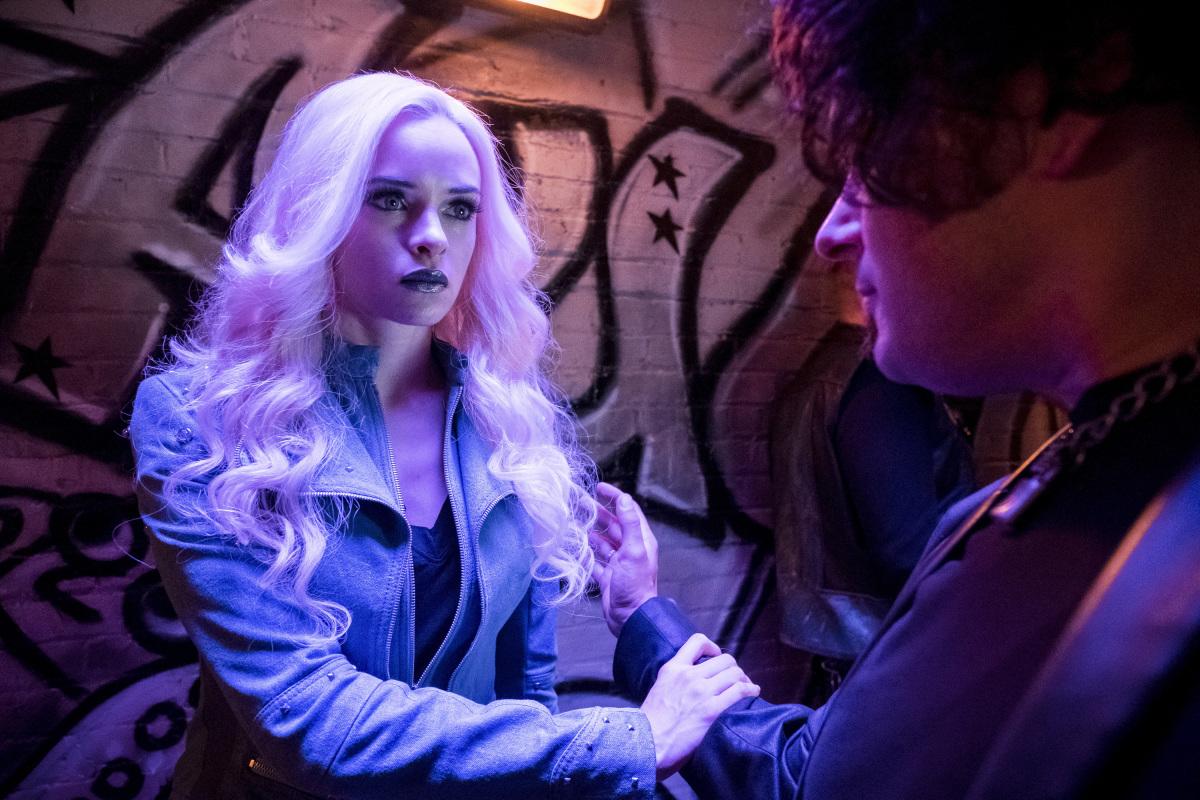 Frost admits to Iris that Caitlin was planning on skipping town to avoid all this meta-crime boss drama but now it’s time to face her between seasons employer and bounces. The rest of the ladies ain’t letting their homegirl go in solo dolo and follow on the low. Amunet runs a rave-type club, cuz of course she does. Killer Frost bodies bodyguard after bouncer on her way in. She looking like Morgan’s return to savagery out there. Her and Amunet exchange differences of opinion, as Iris sneaks in and watches this all play out.

Frost wants to chuck up the deuces on the criminal underground, but Amunet got some incentive to stay. She’s in possession of a meta by the name of Weeper, created just a few weeks ago (wink wink). Weeper cries tears of love, literally, and Amunet wants Frost to become her bodyguard once more so they can make boatloads of cash off the Molly x Ecstasy on cupid steroids. Killer Frost declines and it’s a showdown at high midnight! Amunet’s bucket of metal was itchin to pop off, and Caitlin was ready to shoot the Sub-Zero. Iris appears just in time to stop Killer Frost and Amunet from murkin each other out, but it wont be the last time these two go toe to toe. 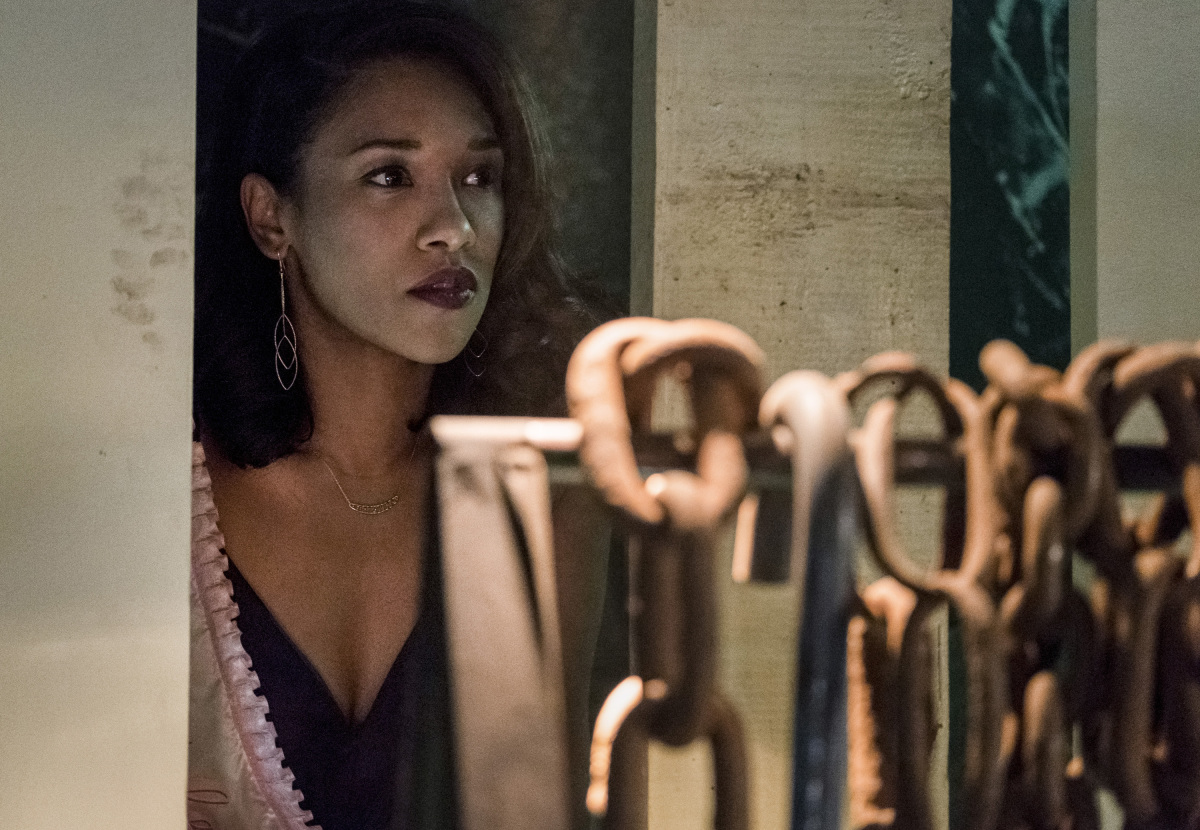 Cecile’s daughter Jonie, the Dr. Who super fan, stops by for the weekend but gets the boot once the bachelor party squad rolls up DEEP. Joe, Barry, Cisco, and Harry plop a squat on the couch as Cisco unveils his ode to Baby Barry n Iris (who were already married at like age 8 btw). Luckily for all, Dibney invites himself to the shindig and is disgusted at the lack of pretty faces in attendance. He hits the crew with, “Ya tryna drop 50 bills on overpriced filet mignon? I know a place where you get all you can eat steak for a Lincoln son!!” If you haven’t put 2 and 2 together, he’s talking about a strip club.

The Elongated Man is in his natural grime ball element up in here! He got his customer of the year award hanging proud like Jordan’s jersey in the rafters. He knows each dancer by name, is using his new powers to steal dollars to made it rain, and having an overall douchey good time. Barry gets bummed when the guys do shots but the lil homie Cisco holds him down with a special Flash elixir. Aaaaaannnddddd Barry is blackout trashed the fuck up.

The rest of the guys night is as you’d expect — ratchet. Barry out here sobbing profusely while pounding dozens of wings. He’s sneaking around at mach speeds stealing peanuts from the bar shouting “I’m the Flash!!” on repeat. It was quite hilarious, actually. Joe and the gang settle down for a show and wouldn’t you know it, the weekender, Joanie is the dancer who comes out and runs off after seeing future daddy-in-law. Luckily, she owned the move and reps that fuck seeing the world through a male gaze, feminism research. Dibney gets the squad into a bar brawl after another douche smashes his MVP customer plaque and jail is the end of the guys’ night. But this is girl’s night, so back to the main attraction. 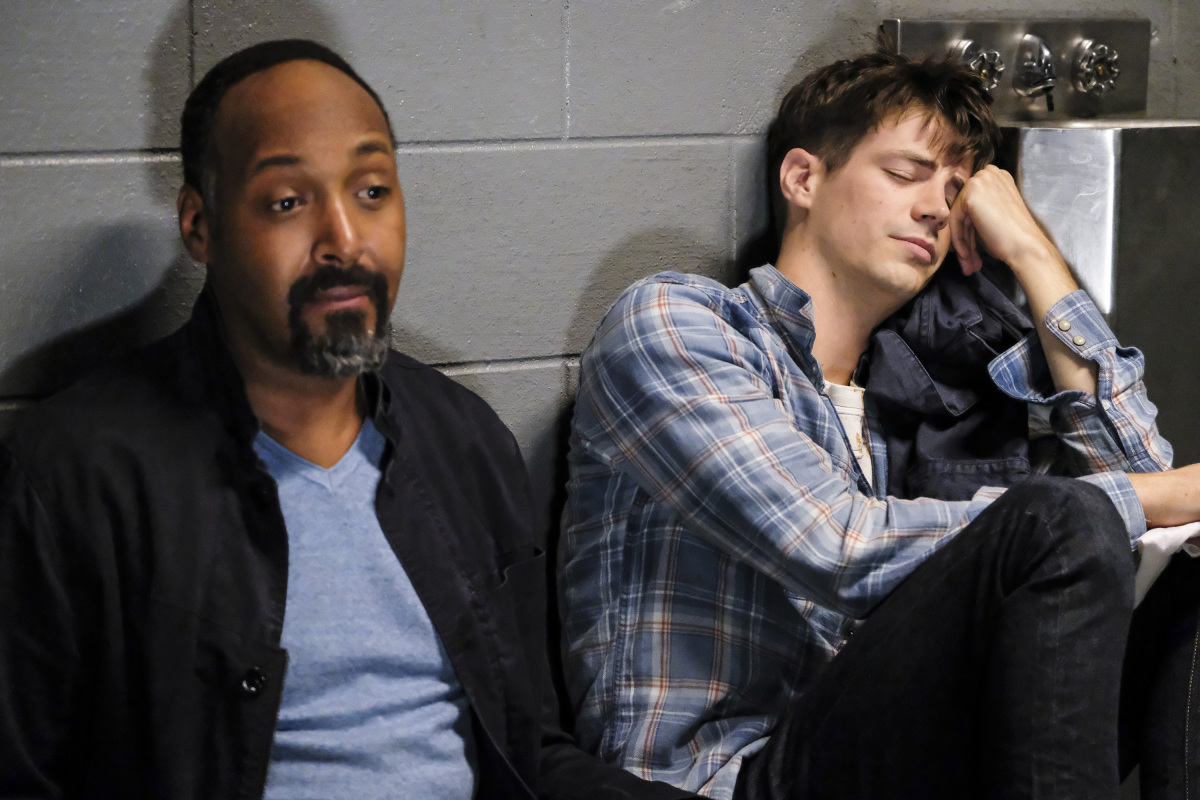 Iris hits Frost with that real talk. Frost is cold and distant. All she worried about is meeting up with a homie who can breach her to a new world.

Sidebar: They been hypin up this Amunet Crime Lord all season and I was skeptical until this next scene went down.

Amunet shows up and backs up the “too powerful” for the police to take her down hype. That metal bucket of shrapnel she carries around turns into her gauntlet glove of death. Amunet proceeds to beat Killer Frost’s ass black and darker blue than she already is. I’m talmbout shrapnel shards to the gut, chest, and face. Metal fists of fury ground pounding on Frost like Wack-A-Mole. Killer Frost got that ass beat so bad it made Joe Jackson cringe as she transformed back into Caitlin. Amunet slaughters a couple cops who show up but loses Cailtin in the process.

Back at The Cortex, Iris fills Cailtin in on what happened during Ice-Hulk mode and she decides to sit out of the next mission. The girls can’t get a hold of any of the guys because the Golden Booty made them hand in their phones, then jail. But fuck it, it’s their time to step up. Can’t nobody tell them nothin after they do a hashtag feminism speech. They ride out to some location rich in aluminum, nickel, and cobalt so we know they found the right villainous warehouse.

Amunet up in the warehouse trying to sell The Weeper to the Triads while Iris and Felicity got the hammers ready. They get caught…obviously. Killer Frost shows up cuz she ain’t gonna let her girls go down like that. Amunet puts that metallic gauntlet thang on and Killer Frost finally uses her powers properly when facing a projectile opponent. Solid ice dome shield son!! After eatin rounds of bullets, Frost blows the ice outward, knocking out the black market dealers. Cecile (back at S.T.A.R. Labs for baby safety) activates a huge factory magnet and Amunet is let loose!>! What in the hell is that dumb shit?? They just let her go!? Na.

Anyway. They’re happy and say “We did it guys.” but Iris was like “Actuallyyyyy it’s, we did it girls.”