My name is Iris West, and I was supposed to marry the fast man alive.

Hold Up! Before I even start this recap. WE GETTIN THAT WOKE FEMME-CENTRIC INTRO VOICEOVER FROM OUR GIRL?! Maxine Waters just shed a Missouri sweet tea tear! Wilma Rudolph is hurdling through her feels after that intro! Althea Gibson just won the Grand Slam listening to this voiceover on repeat! Ok, ok, back to our regularly scheduled programming.

We start off this season of The Flash with Vibe and Kid Flash tracking down Peek-A-Boo, who is puttin the And 1 Mixtape okie doke on these fools at every turn! She goin mad Hot Sauce on em until Iris gets the sticks and starts putting in the S.T.A.R. Labs behind the scenes work! She analyzes Peek-A-Boo’s Nightcrawler teleportation distance limits and predicts it’s 3 buildings, so Vibe jumps ahead and they take her down with Joe’s help.

Starsky and Hutch return to the pad arguing over the team being called Team Vibe or Team Kid Flash. Iris shuts that shit down cuz it never was and never will be Team Kid Flash. You can tell she really has donned the helm here. Then the tone shifts to that separation anxiety feel. Cisco mentions how easy things are when Barry is here. Cecile’s moving in. Joe tells Iris the CCPD needs a new Forensic Scientist. He goes so far as to suggest a funeral and Iris hits the dad, bye button.

But she can’t sulk for long because a brolic flying samurai just dropped into the streets of Central City like a Ronin Gundam. Kid Flash and Vibe show up to be useless. Oh wait, Kid Flash breaks out his perfect Japanese for noooo reason and the evil samurai looks at him like, “You racist ass, half rate, dandelion Flash, where is the real Flash? I want to shoot the fair one. You have 24 hours before I destroy Central City.” Then flying Yoshimitsu hits the team with the ill katana energy blast to the ground and police cars and bodies go flying like they got hit with the Chernobyl A-Bomb cloud!

Cisco suggests they retrieve Barry from the Speed Force. Joe and Iris ain’t with the shits. Iris in particular ain’t havin it. Cisco does what he do and goes to find an accomplice. He winds up at the bar that a “healed” Caitlin works at and sweet talks her back onto the team.

They all decide to go through with Cisco’s grand plan, but leave Iris out of it. They return to their favorite special training/experiment hangar. Cisco is like, “Guys, Barry said look to me.” Joe is like, you better be right boy and Cisco is like, BET. He breaks out the Speed Force Bazooka that Caitlin and him tweaked to trick the Speed Force into thinking Barry’s still there. Cisco unleashes the Bazooka beam andddd…it’s a dud! But on the other side of town, liquid rises, a breach opens up, a truck is swallowed (yea, that driver dead) and out runs Barry in a blistering naked sprint. He finally stops, bare assed in front of a truck of farmers?

Iris is tiiiight. It’s beef on sight with ayebody. She throwin hella shade at Caitlin for being an absentee teammate. Mid-verbal Bloodsport, Cecile gives Joe a call and lets them know the prodigal son hath returned. But this ain’t the same Barry. Barry is manic, dissociative, childish, random, and neurologically screwed. He’s unshaven, unkempt, and grizzly. He’s drawing symbols everywhere and going off about atoms and galaxies. He really on his Beautiful Schizophrenic Mind shit. Caitlin thinks he has some form of dementia or schizophasia. Cisco tries something, but Barry’s still off the rails. Grant Gustin is absolutely terrifying and phenomenal in these scenes. Deadass, who knew?!

Iris asks for the room like Olivia Pope, and tries to get through to him. She finally comes in for a hug and whispers some sultry, sexy, velvety smooth shit to him. Barry’s eyes flicker with lightning and he goes Fate Zero Berserker mode. Caitlin blasts the hyperactive child on Zoloft with an icy blast.

Samurai Jack returns and Wally runs out as Flash to put the beats on him…only thing issss, he ain’t the Flash and he gets his ashy ass handed to him! Flying Yoshimitsu deadass javelined a sword through Wally’s leg and yoked him up with his sword like Rafiki holding up Simba over the Pride Lands.

Joe’s down in the pipeline shaving his adopted son. Afterwards, Joe hears something oddly familiar, “You said it yourself, she loves danger.” Joe knows he’s in there. After, he goes to sit down with Iris and reveals that he’s been going back to church with Cecile. It’s a pretty touching scene on faith and strength, before Cisco interrupts cuz the Gundam Ronin’s deadline is officially up.

Yooo how every officer in the CCPD, SWAT and National Guard show up to flex on the mysterious samurai?! All this dude is doing is talking shit about Flash not showing up and guns get drawn like the climax of Set it Off! Don’t even get me started on Queen Iris. Ms. West rolls up to dude and tells him that she’s good bait and gets kidnapped. Dam Iris! I was down with you taking charge of the Barry-less team, but this a bit excessive! Iris’ a savage.

Joe runs to Barry’s cell and tells him Iris is in trouble. Takes a hot minute but we see that lightening sizzle in his eyes before he bursts through the glass cell (knocks Joe unconscious), grabs his suit, and runs down the Samurai. He’s led into a wind turbine field where an amazing chase scene goes down. This was one of the most unbelievably unique landscape choices in hero vs. bad guy showdown history. Swole Ronin Samurai starts blasting wind turbines as they come tumbling down on Barry in his new Flash suit. Barry sees an opportunity and takes it, as he launches off a falling turbine and snags Iris from the flying villain, catapulting him into a turbine fan revealing the destroyed Samuroid interior.

Iris thanks Cisco for believing when she couldn’t. Caitlin promises that she’ll return, making it official! Team Flash is back baby!! Except for the fact that Caitlin was a biker? mobster? thief? thug? What was she into for these last 6 months? And are her powers Hulking out?! We wrap up with a welcome shot at the Mechanic and Thinker, our season 4 big bads. Clearly, they manipulated Team Flash into pulling Barry out of the Speed Force because they couldn’t do it on their own. Now, the question is, what do they want with the Scarlet Speedster? 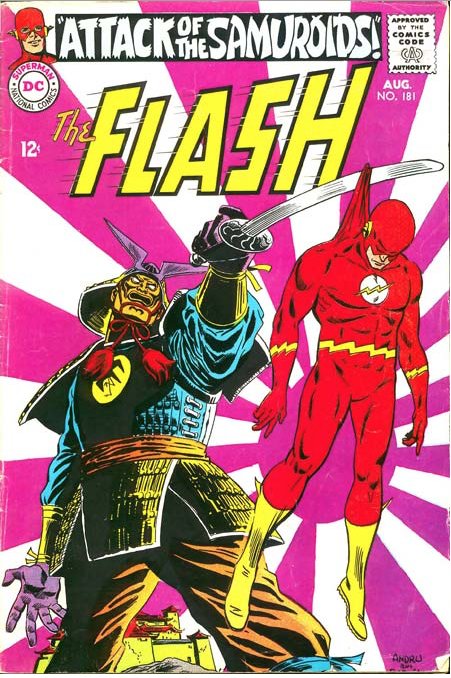