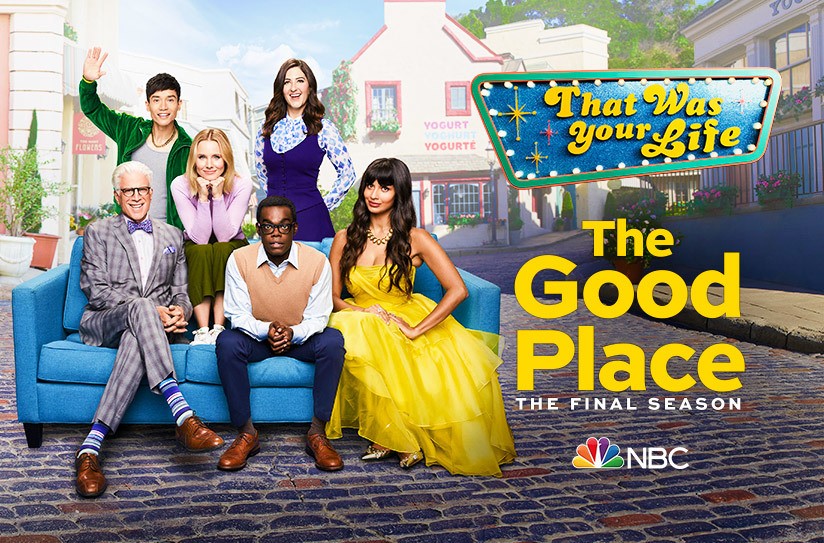 We’re In The Neutral Place Now

For nearly fifty episodes, The Good Place has been a staple of the TV landscape. A sitcom without rival, or even a clear competitor, because of the absurdity the show has embraced. There’s no show in recent memory that has attempted this many reboots of its own genre and basic premise. The rapid evolution from comedic antics to philosophical musings to soul crushing moments has developed to be one of the most endearing series of the decade. In many ways, it’s devastating to see Schur’s creation come to an end. In just as many ways, it’s comforting to know that the series is ending on its term with a definite finale in mind, and my goodness, what a finale it will when that 90-minute special airs on January 30, 2020. However, it is still November and we need to process what happened during the midseason finale: The Answer.

Let’s Go Over The Plan One More Time

Alright, so let’s do the quickest of recaps of everything leading up to this moment. Spoilers for everything The Good Place related starting… now.

Every Problem Must Have An Answer

Keeping in the grand tradition of the show, Chapter 48 is unlike any of the preceding episodes of The Good Place. While we have gotten glimpses into the backstories of our all main characters (and some of the more memorable side characters), this is a full deep dive into the entire history of Chidi Anagonye, from his first life, his 803 some afterlives, his second life, and 804th afterlife. This is the last gambit of Team Cockroach, a Hail Mary that if Chidi has his memories back he’ll be able to find the answer on how to save humanity.

In the span of a moment, we get to see sides of Chidi we’ve never seen before. We start the saga with an infant Chidi at the moment he received his name to a slightly older Chidi (about 8 years old) developing a 55-minute presentation on why his parents shouldn’t get a divorce. If that isn’t the most Chidi thing you’ve heard, I swear I want to know what fanfiction you’ve been reading because it feels very close to peek-Chidi. The “Why You Shouldn’t Get Divorce” presentation works, although we see the insidious indecisiveness that Chidi is infamous for rear its ugly head when he can’t manage to find a seat. He’s so convinced that every problem has an answer if you just read enough books and think hard enough, and listen, young Chidi, I wish it was that easy.

We fast forward to Chidi in college having dinner with his girlfriend and his parents. As his dad claims that “Chidi will solve the world’s biggest problem” we hear the signature nervous squeal of Chidi with an immense cheese board before being told to calm down. His girlfriend immediately breaks up with him because he’s so involved with the cerebral, the philosophy, that he’s entirely lost touch with his emotions. This gets compounded by his thesis advisor calling his “magnus opus” an incomprehensible dense mess of words, which as we know preludes Chidi’s (first) death.

Next, we get to see Chidi’s introduction to the Good Place with Michael who tortures him with injections of inquries that freeze Chidi in his tracks. But we also get to see a magical fridge that knows exactly what Chidi wants for breakfast which prompts him to ask if there’s a version of that, but for people and relationships. And hard same Chidi, hard same.

Several iterations later at Jason and Janet’s wedding, Chidi asks Jason for advice which very obviously surprises him. Chidi’s unsure how to be decisive and work his way through new problems, and Jason offers a simple bit of wisdom that I think we can all relate to: “Sometimes you just huck a Molotov cocktail at a drone and see what happens.”

Next, Chidi (currently soul mated with the Raven Queen Esmeralda) consults with Tahani about her ability to react to situations deftly and her response is simply that she has failed a lot and learned from her mistakes.

The final stretch of the episode focuses on Chidi and Eleanor reconnected. And by Janet, William Jackson Harper and Kristen Bell are at the top of their game this episode (this season as a whole really, but this episode is an entirely different level). This unseen courtship is entirely inline with what we previously seen, but the emotional awkwardness and the omnipresent knowing what comes next really drives the stake through the heart. When we see the moments before Chidi got his memory wiped, his talk with Michael (Ten Danson also out here doing all of the work) is one of the most poignant moments on the show. It should be experienced in all of its audiovisual brilliance.

All of this leads to Chidi stirring from his seat, asking Janet for the note he wrote before his got involved in the experiment. I teared up when reading it. Seeing Chidi’s smile at the best piece of writing he has ever produced. It’s only nine words… but what a nine words they are.

So What’s Comes Next?

The Good Place has been a series that has made the Trolley Problem an endless treasure trove of comedic gold and criticized the systemic frameworks of society that trap us. It’s a series that has cleverly shown us how increasingly complicated it is to live a truly ethical and virtuous life (hear hear, there is no ethical consumption under capitalism), but has also shown us that we don’t need to be 100% ethical and virtuous people to be good humans. More than anything, three and a half seasons of The Good Place has taught us the opposite of Satre’s hell: happiness is other people. Happiness is learning to be better from other people. Happiness is forging connection and becoming stronger for it because we learn to grow in ways we wouldn’t have individually. We’re messy and complicated, but we all have a chance to improve. I don’t know what twists and turns to expect in a series that has constantly changed their status quo.

I can’t imagine a world without The Good Place because it has unequivocally been a reminder that even in this, one of the weirder and stranger timelines, we are capable of being good. Of recognizing what we owe to ourselves and others. And at the same time, I’m imagining a world where people can experience the epic comedy award winning series that is The Good Place. Let’s rest up Team Cockroach. We have a conclusion to look forward to in 2020.